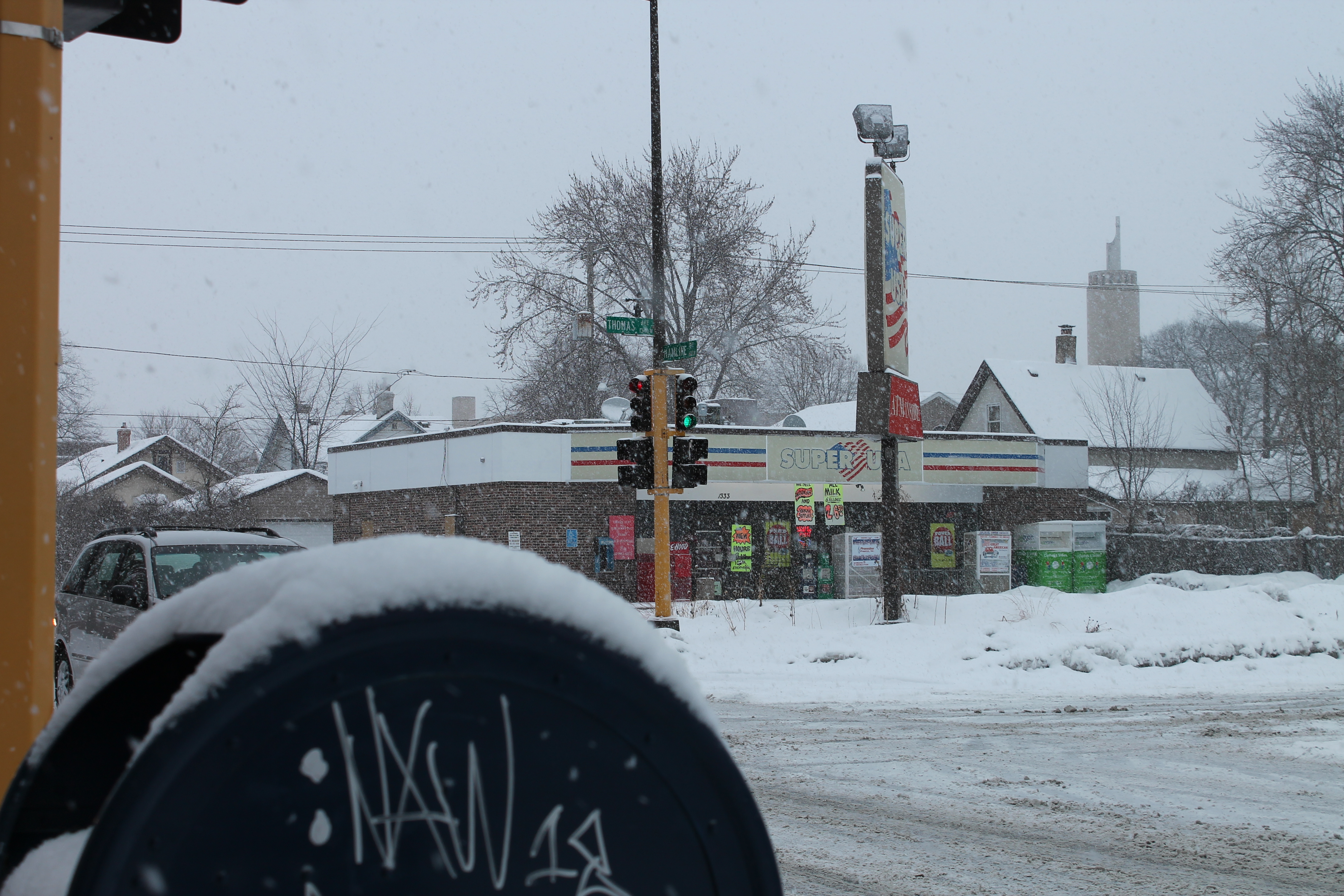 Tagged mailbox at Hamline and Thomas. (Photos by Erin Newton)

Spraying graffiti on your own garage is not how most people would respond to tagging, but that’s just what Becky Johnson of Hamline-Midway did.

On “the wall of illiteracy,” as she and her sons named it, they sprayed over previous vandals’ graffiti with a message that she recalls as something like, “’Please don’t tag us unless you want to be shamed.”

It worked. Their family had six to eight months of a graffiti-free garage, not including their warning. Then, right as Johnson fell ill, the city insisted either she remove her own spray-paint from her garage or give them permission to do so. Within a week of the city painting over her message, fresh tags were back.

Pam McCreary of the Saint Paul Police Department said she sees recent graffiti as being a product of gangs from across the country growing in Twin Cities neighborhoods. McCreary has been with SPPD’s crime prevention department for nearly 12 years. Over this period, she developed an understanding for the role of tagging among gangs and the danger it poses to neighborhoods. She said that failing to report and/or remove it invites further expression on and damage to property in the area. 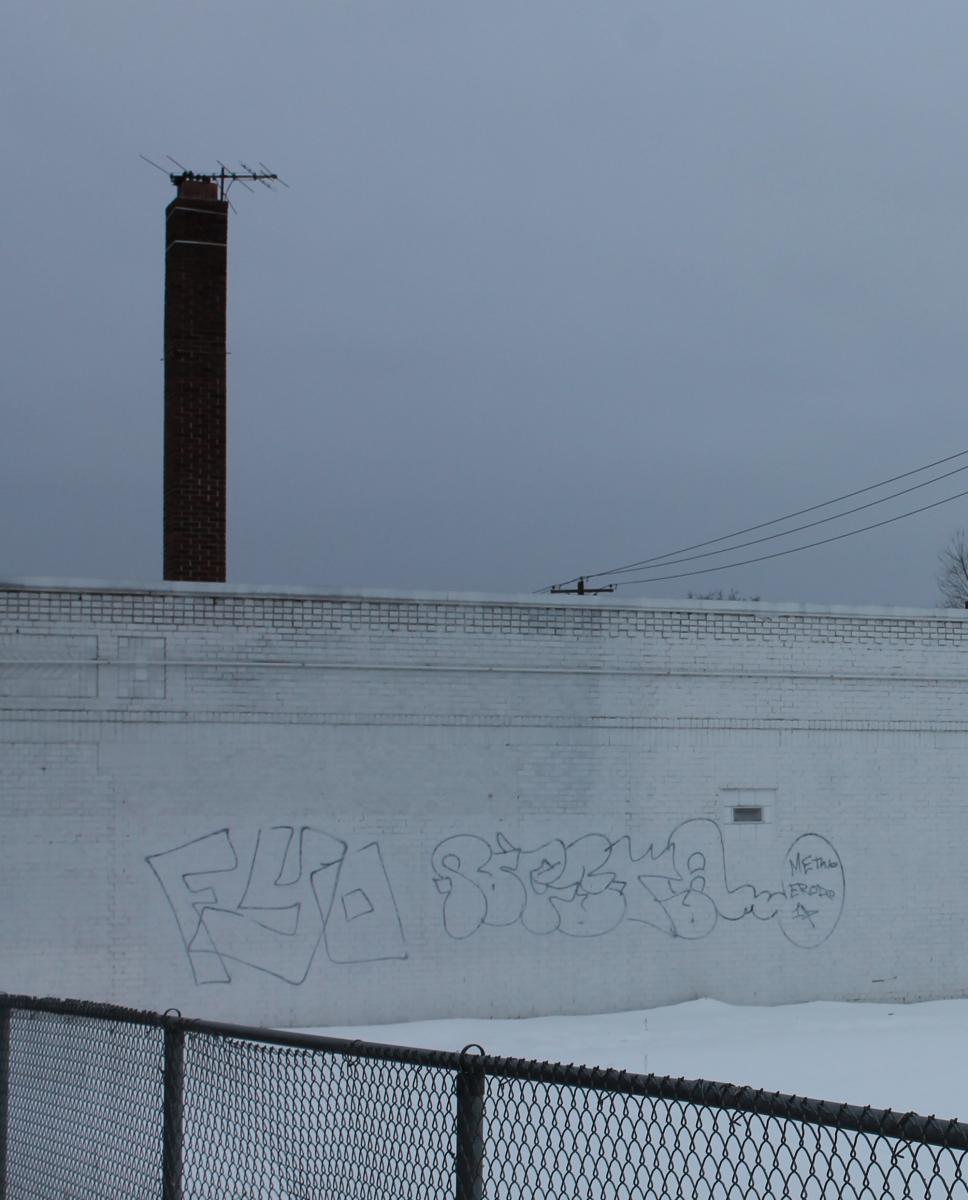 Graffiti on side of The Townhouse on University Avenue.

“I relate this to mold: if you don’t remove it, it will grow, and grow, and grow,” McCreary said. Eventually “other gangs will likely add their signs showing … that the area belongs to their gang.”

Whether graffiti has increased or decreased over the years is hard to say definitively. SPPD’s Research and Development unit did not respond to questions by press time, and online crime reports for the two previous years do not show a clear trend.

Phil Imsdahl, building engineer at the YMCA on University, sees graffiti as a “relatively modern phenomenon.” In the 1950s and 60s growing up in Hamline-Midway, concerns focused on fights between gangs and other violent crimes. Graffiti of public or private property was something that only occasionally happened. Imsdahl recalls vandalism being an issue mostly around Halloween and largely specific to teenagers. 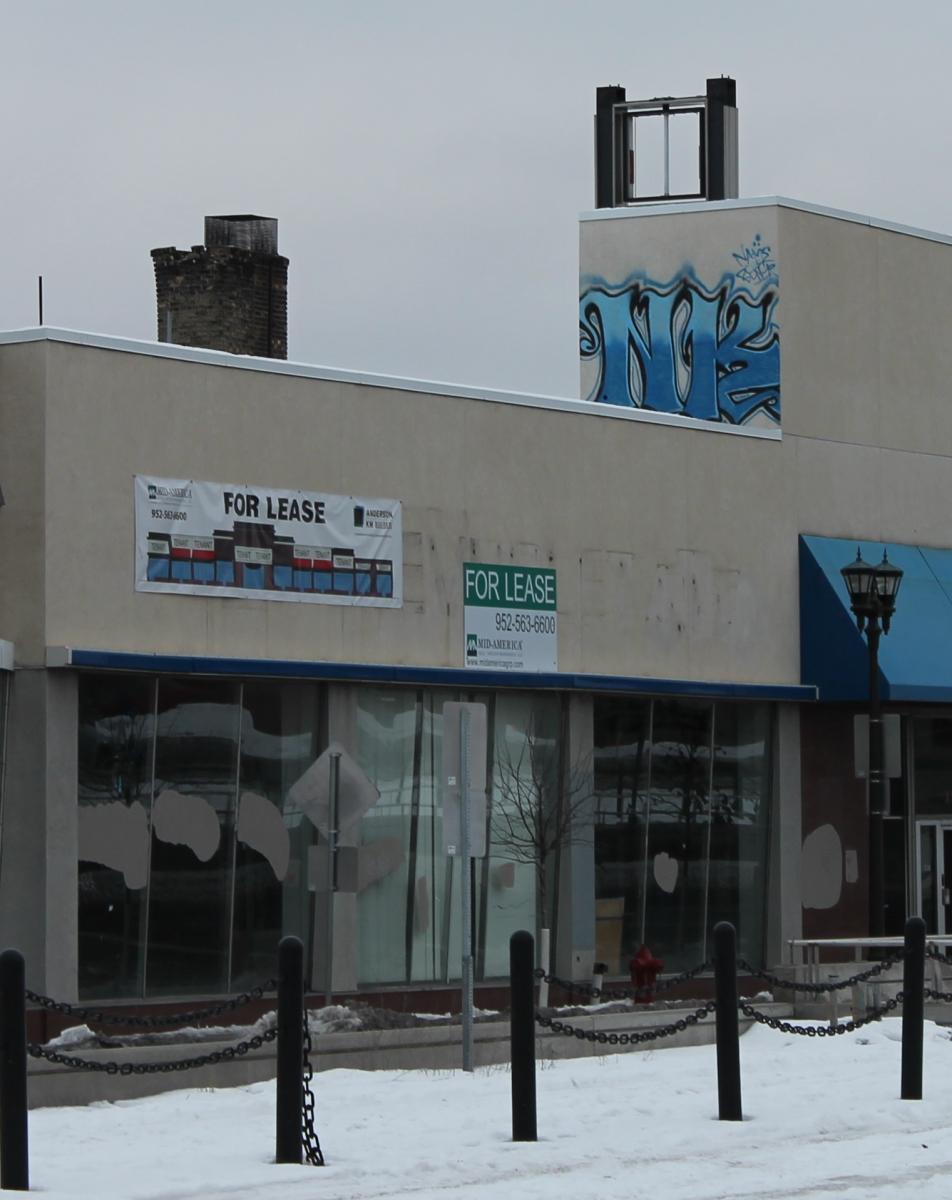 The abandoned Chevrolet showroom on University (left) is a graffiti magnet, according to some neighbors. One of them, Tom Goldstein called it the “eyesore that I have to see every morning I look out my front window.” To Goldstein, the city “has been pretty good about getting the graffiti covered over, but it’s still a pretty unattractive blight on the neighborhood.”

Some long-term residents feel things have definitely changed for the better. Afeworks Bein, owner and manager of the Snelling Cafe at Lafond and Snelling, remembers graffiti on a wide array of surfaces when he opened for business nine years ago. Four years ago, he said he would get tagged every two to three weeks. Around the same time, every building from University to Hamline on Snelling got tagged. Recently, Bein said, he has gone close to a year without tags.

Pat Olsen at Hartland Shoe Repair and the owner, Gene Hartland, remain concerned about the implications of tagging. Both think their shop, located at Hamline and Thomas, is likely on the corner of somebody’s territory, based on how often various landmarks at the intersection get tagged –including their wall, mailbox, and the walls of nearby Super USA. Since the previous owner and manager of the Super USA quit, the frequency of vandalism has risen.

“The guy [previous manager] at Super USA was selling to undesirables, creating a black market by selling one cigarette at a time and other things like that,” Hartland said.

The increase in tags is, Hartland believes, is a reaction to the previous manager’s being forced out.

For some, graffiti can be art. Olsen would love to work with graffiti artists: he was excited by the possibility of connecting with someone who could spray shoe themes on the side of Hartland’s Shoe Repair.

Cam, the moderator running Minneapolis-based lighttheunderground.com, knows there is a wide variety of intents and types when it comes to graffiti. Some taggers paint their names to “get up” and be a bigger label, or have bigger name recognition. Cam prefers to focus on the art process involved, as the work on Light The Underground suggests. Either way, he said, graffiti artists are not gangs. The “crews” that Cam is familiar with are about motivating each other to do better work. He insists nothing that they do, except for the graffiti itself, is illegal.

“Everyone has their own reasons whether [to send] a bigger message to the public … just to straight up wreck shit; to express their feelings; throw art, or just to have fun,” he said. “I personally think some graffiti makes the world a lot more beautiful and interesting.”

JoJo is a coordinator for the GAME project with Intermedia Arts in Minneapolis. He distinguishes graffiti artists by using a different term altogether: writer. For him, graffiti is about using letters to channel creative energy. To the artist, graffiti means whatever he/she wants it to mean. JoJo chose his graffiti name from a fictitious character.

“With graffiti, you can take on roles to make yourself seem more powerful,” he said. “For example, if you took the name Captain America, you might be patriotic or [want to] showcase that type of passion for your country. It can give someone inner strength and confidence that they do not normally have.”

JoJo explicitly avoids referring to himself as an artist, but also lays out firm principles for those in the graffiti community. Artists or writers are “supposed” to tag only on public surfaces.

“We all frown upon painting cars, homes, churches, schools and other so-called mom and pop style businesses, but it still happens at times,” he said. At the same time, JoJo defends their right to expression: “It is no different than a business promoting itself with a billboard or a sign. We just don’t own any of the property personally that we tag on.” He continues, adding: “The city workers that clean up graffiti should love graffiti artists. It provides them with jobs.”

For those less interested in the meaning behind the act, the St. Paul Police Department’s Western District has community meetings on the third Tuesday of every month, at 9:30 a.m. and 6:30 p.m. The police line for the FORCE unit on gang-related crime is 651-292-3712 and the number for general graffiti is 651-266-8989.

Interested? Want to be a part of the conversation? Have stories of your own? I am not planning on this being my last article about graffiti. Please email thoughts, pictures of graffiti in your own neighborhoods, and feedback to enewton_16@yahoo.com.