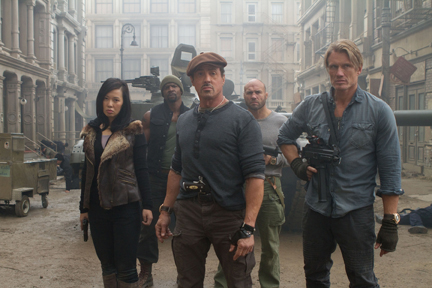 In the climactic battle of The Expendables 2, two dinosaurs of the action film genre, Sylvester Stallone and Jean-Claude Van Damme, tangle in a fight to the death. Stallone whips around a chain big enough to wrap around a hundred year-old oak tree’s trunk three times. Van Damme’s weapon of choice is a knife that Jim Bowie would be proud to wear on his hip. If this type of matchup doesn’t send tingles through your arms and back, then The Expendables 2 may not be your kind of film. But if watching Rocky Balboa and The Muscles from Brussels duel with fists, knives, and guns is on your bucket list, then you’ll be as happy as a pig in its own filth watching this movie.

In the sequel to The Expendables (2010), Barney Ross (Stallone) and his team of ragtag mercenaries are up to their usual activities: shooting bad guys, punching bad guys, and blowing up bad guys in the name of dollar signs. The guys are still the close-knit group from the first film, minus Mickey Rourke and plus Liam Hemsworth. The boys are accustomed to making their own schedule, but they’re brought to their knees when Church (Bruce Willis), a CIA agent who remembers that The Expendables owe him a favor, comes knocking.

That favor turns out to be stopping a man named Jean Vilain (Van Damme) from acquiring a map with directions to an abandoned Soviet Union mine that houses five tons of plutonium. Vilain wants to create chaos in the world by shipping the plutonium to various bidders. Oh, and there’s the money, too. Vilain wants to become filthy rich, a classic motivator for action movie villains.

Comparing this film to its predecessor, I’d say improvements have been made. While The Expendables took itself too seriously, the sequel wears a big goofy grin on its face most of the way, balancing bloody bullet holes with self-aware humor. Seriously, there’s a lot of self-deprecation. It’s like Stallone, who co-wrote the screenplay with Richard Wenk, took a page from the writing manuals of pop-culture reference kings Dan Harmon (creator of NBC’s Community) and Kevin Williamson (writer for the Scream franchise). Die-hard fans of the cast members will drop their popcorn out of pure giddiness when Dolph Lundgren mentions his true-life experiences as a chemical engineer, when Arnold Schwarzenegger brings up memories of The Terminator, and when Chuck Norris says a Chuck Norris joke…and laughs at it.

The action is well executed, gory, and above all, fun. Unlike the first time around, Stallone and the boys flex their muscles and blast their gun barrels enough to sate your action appetite for the rest of the week. It’s leagues behind the inventiveness of the fight scenes in The Raid: Redemption, but there are enough explosions and B-movie one-liners mixed in with karate chops to make every excursion into battle memorable. Director Simon West keeps things fast-paced, and in a pleasant surprise, mostly opts for raw stunts over computer-generated special effects; a refreshing spectacle in this age of CGI dependent superhero flicks.

The Expendables 2 is a rare accomplishment because it surpasses its predecessor and builds enough character development for all 13 of its action superstars to make them a good investment.

4 stars out of 5 One star off for the screenplay. It gets too silly at times, but man can it be a blast!

The Expendables 2 is rated R, has a runtime of 1 hour and 43 minutes, and was given a wide release in United States theaters on August 17, 2012.