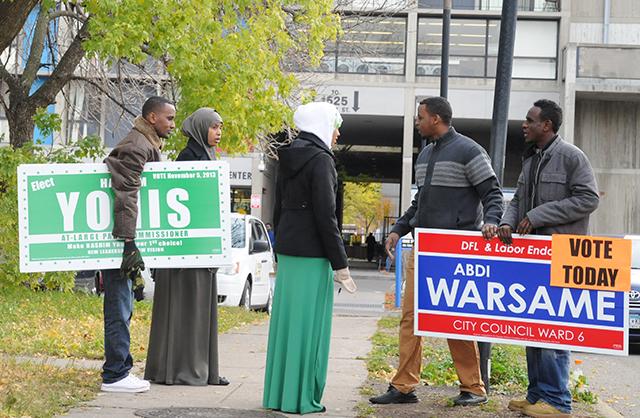 Warsame supporters championed their candidate across the street from the Brian Coyle Community Center on the West Bank of Minneapolis on Election Day. (
MinnPost photo by James Nord)

From as far away as Ethiopia and as close as neighborhood coffee shops, the Somali community is cheering the election of one of their own to the Minneapolis City Council.

Political activists and ordinary voters alike see hope in the face and promises of Somali-born Abdi Warsame, a person they say will help bridge the gap between mainstream Minneapolis and the burgeoning Somali community.

Easily defeating his opponent Tuesday, Warsame reportedly became the highest elected Somali in the country, at least in a city this size. Tiny but diverse Clarkston, Ga., with a population of about 7,500, also elected a Somali man to its city council this week.

“The community is excited. Everyone is talking about it,” said Ilyas Abdikadir, 29, a mental-health counselor with Community-University Health Care Center in Minneapolis. This is a sign Somali-Americans are becoming players in U.S politics, he said.

“You go to the coffee shops and already some of the elders are talking about it,” he said. “There is actually more sense of hope than before,” having a person in a position of political power, he said.

“I think he is a person who will bridge the gap between the mainstream Minnesotans and the Somali community,’’ said Shukri Hassan, 50, a case manager of Somali descent with the International Institute of Minnesota. She said she made it her personal and unofficial responsibility to get out the vote among her neighbors in Minneapolis Ward 6 in south Minneapolis, urging them to vote to “better the life that you lead.’’

“We need to have people who are progressive, well thought out and will contribute to this community and do good things for everybody,” Hassan said. She praised Warsame, who was raised in the Untied Kingdom and came to Minneapolis in 2008, for being “qualified” and well-connected to the community.

Finally somebody figured it out, how to get a win, enthused Jamal Abdulahi, 37, a state director with the DFL who chairs their Somali Caucus and is a policy fellow at the Humphrey School of Public Affairs at the University of Minnesota.

Warsame, Abdulahi said, worked from the grassroots on up, organizing a constituency starting on the neighborhood level and campaigning hard from redistricting through the endorsing convention and throughout the campaign.

Abdulahi said Warsame told prospective voters, “I need you to show up, and they did and he won.’’

“People are excited. They’re calling. They’re on Facebook. They feel their vote counted, that their vote matters,’’ acknowledged Warsame, who acted as his own campaign manager and campaigned on a promise to address inequities for communities of color and the working poor.

Warsame, who holds undergraduate and graduate degrees in business, credited not only East African voters but the wider community as well, those he described as “traditional voters” for his victory.

East Africans are, however, 40 percent of the ward, he acknowledged, and voter turnout in the Cedar Riverside precinct particularly, the home of many Somali-Americans, was “very high,’’ he said.

Warsame works as executive director of the Riverside Plaza Tenants Association and sits as board chair of the Cedar-Riverside Neighborhood Revitalization Program.

He credited his success in part to some 200 volunteers and the campaign’s outreach efforts. The campaign educated would-be voters on the importance of local government on issues like public housing, safety and security and the logistics of voting, he said.

Facebook posters from Minneapolis to Ethiopia shared their elation and congratulations. One called it “a big accomplishment for all the Somali;’’ another prayed, “May Allah bless you on this journey.’’ A third said: “Congratulations my brother well done, your dream became true.”

Hours after his win, the local community started calling for Warsame’s attention.

Abdikadir told me about a demonstration set for this Saturday where mothers, elders and youth will protest the violence in the Somali-American community. The sponsors have invited Warsame to attend.

“I don’t have my schedule, but I probably will. It is a very important issue,’’ Warsame said, referring to spikes in youth violence recently. That needs to be addressed, he said.

And maybe it will be in a different way, having Warsame sitting on the Minneapolis City Council.

That’s “power in the pulpit,’’ Abdulahi said. “I think Abdi is going to have a platform to bring attention to things that are important and issues in that community.’’