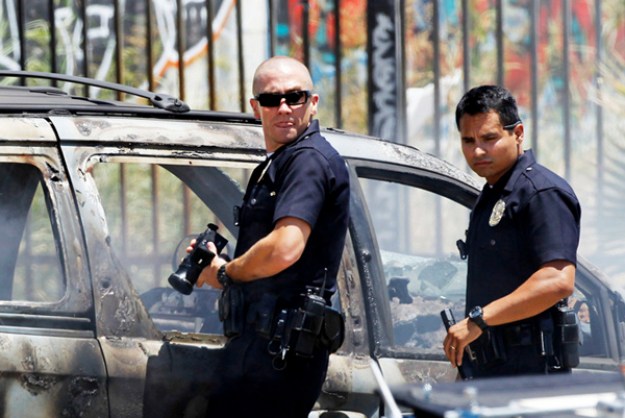 Writer-director David Ayer has a niche: creating compelling films that revolve around men and women of the law. The Fast and the Furious, Training Day, S.W.A.T.: these movies and more like them are tattooed with Ayer’s directorial and/or writing influences. Although Ayer has explored crooked cops in past features, his latest flick, End of Watch, follows two honest partners in blue as they patrol the blood-smudged streets of South Central, Los Angeles. It’s a sometimes sad, sometimes funny, always thrilling ride-along for viewers.

When twenty-something Brian Taylor (Jake Gyllenhaal) isn’t slapping cuffs on criminals’ wrists, he’s in the classroom. Brian goes to law school and his newest elective class has him bringing homework into the precinct. That elective is a film class. Brian uses an array of portable cameras to document the adventures of himself and partner Mike Zavala (Michael Peña) as they answer distress calls in the ghetto and attend meetings called by the sergeant in the conference room.

Brian and Mike are not only co-workers; they are best friends. They help each other stay awake while out on patrol by talking. They discuss many things, but the topic that comes up the most is their love lives. Mike has been married to his pregnant wife Gabby (Natalie Martinez) since about the night they went to prom together. After wandering through a long string of one-night stands and repeatedly denying Zavala’s attempts to get him to date one of his cousins, Brian has finally found a woman he can love physically and mentally. Her name is Janet (Anna Kendrick), and the relationship between her and Brian begins to move forward with the urgency of a getaway car being chased on an episode of Cops.

A couple of hard-nosed, determined cops, Brian and Mike aren’t afraid to look the city’s worst in the eyes and not lose the staring contest. But after responding to various distress calls over the course of a few months, the dedicated duo find themselves in over their heads when they step on the foot of the wrong monster. A Mexican cartel has made a home in South Central. They’re a brutal, nasty bunch. Some of their activities include drug running, human trafficking, slice-and-dice torture, and playing their music obnoxiously loud at parties. Brian and Mike get on the cartel’s bad side after they make some arrests, discoveries, and comments that cut into the cartel’s profits and generally offend them. A bounty is put on the heads of Brian and Mike, and viewers can only grip their seat handles a little harder as the plot rockets forward and bullets start flying.

The best parts of this movie aren’t the shootouts or the car chases (even though these provide high-rate entertainment); it’s the scenes when Brian and Mike just talk: about love, about kids, about Caucasian mannerisms and Mexican mannerisms, about anything. Screenwriter Ayer supplies his two leads with pages of playful, at times vulgar, banter that’s completely believable and mostly very funny stuff. I laughed a lot watching this movie, something I didn’t expect to do because the film can be as raw as a low-cooked steak in terms of violence and language. Amidst all his joking, though, Mike offers some key insights into romance in hopes of steering his buddy in the right direction; it’s advice that makes Brian and the audience think.

Kendrick and Martinez do a rock-solid job of grounding Brian and Mike in their home lives. Watching the fellas interact lovingly with their ladies reminds you that although they may be hotshot cops, they’re still human. They still have people they go home to every night. Ayer continually alternates between Brian and Mike chasing bad guys on patrol to them kissing their loved ones at home. Because there are enough cuts to the home front, the violence on the streets never gets desensitized; it instead becomes more horrific.

The supporting players all show up. A steady cast consisting of Frank Grillo, David Harbour, America Ferrera, and Cody Horn portrays Brian and Mike’s fellow officers brilliantly. They act like real cops and get a chewy morsel of character development along the way. By the end of the movie I felt like I’d known the precinct members for years.

With End of Watch, Ayer clearly shows he’s still king when it comes to police dramas. This is a masterful look at officers of the law simply executing their everyday duty of protecting citizens from the scum of the streets. There’s enough emotional weight here to weigh down an elephant, but with Ayer’s unflinching writing and strong performances from the cast, End of Watch never feels overwrought or preachy. I only wish Ayer would have fleshed out the antagonists more. The members of the cartel mostly just cuss and shoot guns. But they are effective at being a damn scary bunch.

End of Watch is rated R, has a runtime of 1 hour and 49 minutes, and was given a wide United States release on September 21, 2012.