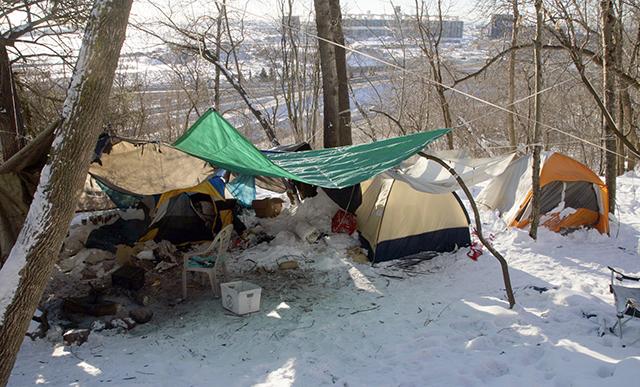 Sharla Gardner met a mother who feared she’d lose her children if people learned of her homelessness and a man who was sure he’d lose his job for the same reason. She talked with people who preferred sleeping outside rather than in public shelters. She learned about the scarcity of affordable housing in Duluth.

And so she introduced a resolution establishing a homeless bill of rights, a measure passed unanimously this month by the Duluth City Council, and the first of its kind in Minnesota.

Duluth joins a growing number of municipalities — as well as a few states — to adopt a homeless bill of rights. Most of these laws are designed to draw attention to the needs of the homeless, but the laws — including Duluth’s ordinance — will have practical implications for the homeless as well.

The full effect of Duluth’s measure is still being sorted out, said Daniel Fanning, policy director for Duluth Mayor Don Ness, but basically it charges the city’s Human Rights Commission to take an in-depth look at homelessness in the community and suggest how to better address it. It could also result in homeless persons being named to the commission. In addition, Fanning said the commission will address construction and financing of affordable housing.

The bill of rights gives low-income and homeless people a voice, he said.

One-third of Duluth’s residents live below the poverty line, according to a council member quoted in the Duluth News Tribune. The affordable housing rate is about 1 percent.

According to state and federal surveys, the number of persons experiencing homelessness in St. Louis County, where Duluth is located, has been on the rise. The statewide triennial Wilder Research survey tallied 752 homeless people in nearby Carleton County one October night in 2012.

Some people live outdoors, moving from one area to another and ignoring social-service providers efforts to coax them indoors.

No other Minnesota city has passed homeless bill of rights, though some U.S. cities as well as a few states, including Rhode Island, Illinois and Connecticut, have taken similar measures to protect the civil and human rights of the homeless. Other states are considering such laws.

Often these actions are a reaction to anti-loitering and other laws that were passed when the numbers of homeless people spiked during the recession. For example, an increase in the homeless congregating in parks and other public places — resulting in normally private behaviors becoming public — produced ordinances limiting the movements of the homeless.

But some advocates for the homeless say the problem is not that homeless people lack a bill of rights. Rather, give people housing and many of these problems disappear, say officials with the Minnesota Coalition for the Homeless, an umbrella group of 150 organizations. They say the state and counties already have safeguards for securing equal rights for the homeless.

Still, “we applaud the efforts of folks” who are working on the affordable housing crisis, said Liz Kuoppala, executive director of the Minnesota Coalition for the Homeless. The coalition is a member of the Homes for All collaboration asking the Legislature for $70 million to construct and rehab affordable housing.

Lee Stuart, executive director of CHUM (Churches United in Ministry), which operates the largest emergency center in Duluth, said the measure is “symbolic” and that it “calls on the community to look for answers to the problems of homelessness.”

But she also sees the bill of rights as “a call for radical inclusion of everyone who makes their home among us.”

“What it doesn’t do is give people the right to violate laws,’’ says Stuart, who stressed CHUM’s support for the Duluth police and their policies.

Gardner, who has a background in social work, says a public forum on homelessness last fall helped her see the breadth of the problem.

“The homeless told us how things impacted them,” she said. They told how they had to be “moving all the time,’’ and had to plan daily where they could use the bathroom, get clean and eat.

A simple action like being told to “move along” by someone in authority terrified them, Gardner said. Many, she said, believe they have fewer civil rights than the rest of us.

About a dozen homeless persons last summer and fall pitched tents under a freeway overpass in downtown Duluth, choosing to sleep outdoors rather than in group emergency shelters. They were unable to find permanent housing. Gardner said passersby harassed and threw objects at the homeless.

“Many of these folks are very vulnerable. Most of them have mental health issues and chemical dependency,’’ Gardner said.

“What came to me is if you’re in poverty, you’re living in fear all the time,’’ she said.

The new law confirms that all, including the homeless, are guaranteed “…freedom from discrimination in education, employment, public services, public accommodations, movement, worship, speech and participation in the democratic process regardless of housing status.”

Further, it affirms that “everyone has the right to a standard of living adequate for … health and well-being and …including food, clothing and housing.” The ordinance also provides for the appointment of anti-poverty advocates to the city’s human rights commission.

Deb Holman, an outreach worker for CHUM and the Human Development Center, put me in touch with Kevin Kjoberg.

Kjoberg, 48, a former iron worker receiving disability payments, has been one of those sleeping near the freeway and then outdoors in the woods. Now he and his girlfriend are applying to move into a studio apartment in Duluth.

They should be able to rent the space because of a subsidy from the Home Program with the Duluth Housing and Redevelopment Authority.

Gardener said city officials will be working with a national anti-homeless organization and the community is hosting a housing forum in mid February.