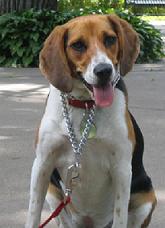 Beagles, and hounds in general, don’t take well to the command “heel.” They’re far more interested in where their very finely honed olfactory sense leads them, nose to ground and straining at the lead. Our Beagle-buddy Daisy is no exception. She has been trained to “sit,” “lie down,” “dance,” “shake,” and occasionally “stay” and “come” (the latter two are largely dependent upon whether or not she thinks there is a treat involved).

One of our neighbors has a pair of well-trained Border Collies who love to chase after and retrieve Frisbees. Daisy watches their performance in sort of a bemused way…as if to ask “what is the point of chasing that thing time after time after time?” She has much the same opinion of chasing and retrieving balls.

I like to walk around our Upper Town Neighborhood in old Saint Paul and Daisy loves to accompany me. She is a people-magnet, particularly small people and seniors, and wherever we go; Irvine Park, the Upper Levee or just around the block, small-people and seniors are attracted to her.

On our way to Irvine Park we generally cut through the Little Sisters of the Poor’s parking lot, where Daisy met Tom, a senior residing at Little Sister’s, and the two of them became fast friends. Daisy (with a little prompting) sat close to Tom’s wheelchair to allow him to pet her. And while tarrying there other seniors would come up to visit.

Tom has since passed away and still Daisy looks for him in his usual spot.

But it’s the kids she lives for. Her life-long small friend is our neighbor, Katie; the two were born within months of each other. When Katie discovers that Daisy is out she makes a bee-line for the hound, and in her tiny voice commands the dog to sit; Daisy sits and patiently lets Katie pet her and only occasionally requires a second sit command from her small friend.

Last Tuesday, August 3rd, we attended the National Night Out gathering at Saint Paul’s West 7th Community Center along with hundreds of neighborhood residents; a large percentage of whom were little people and a large percentage of those little people were drawn to the Beagle, who graciously consented to accompanying us to the event. The hound was in her glory…so many kids..so much petting. That dog’s life is good!