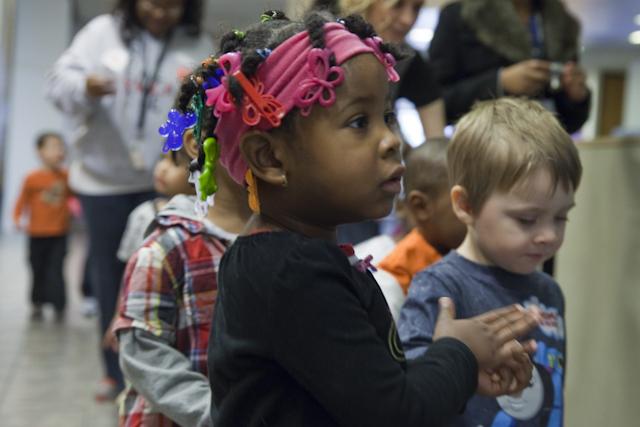 Lately, we’re hearing a lot about the benefits of early childhood education — especially for poor kids.

In his state of the union speech Tuesday President Obama spotlighted the benefits of money spent on quality early childhood education: “…the sooner a child begins learning, the better he or she does down the road…” and proposed working with states to make “high-quality preschool available to every child in America.” He is expected visit a pre-kindergarten class in Georgia today to promote the White House plan, which includes public preschool funding for any 4-year-old whose family income is 200 percent or less of the federal poverty plan. In Minnesota, Gov. Mark Dayton has proposed spending $44 million for early-learning scholarships for poor kids.

But critics, including conservative columnist Katherine Kersten, have their doubts that these kinds of programs are worth the money and question whether the economic returns — at the high end, $16 gained in the future for every $1 spent in early childhood — they promise are believable.

They point to what some call the “fade-out” factor: some research showing that high-quality programs do help kids early on in life but the academic benefits fade as the children continue their schooling. In other words, despite the boost of early learning programs, poor children face so many other significant barriers to success — chaotic homes and neighborhoods, low-quality schools and one-parent, non-supportive families – that those early benefits don’t last.

Is there anything to the criticism?

Rob Grunewald, an economist and early childhood education expert at the Federal Reserve Bank of Minneapolis, took on the question at a forum last week sponsored by the Achievement Gap Committee, a grassroots citizen group that’s been working for years to even the educational playing field between students of color and whites and between poor and middle-class kids. (Their second forum on early childhood education is Friday.)

Anyway you look at it, Grunewald argues, there is a “high rate of return” for investing in early childhood education. Research proves early learning is a strong foundation for lifetime success, he says.

Grunewald concedes that a Head Start program analysis in 2012 demonstrated that gains there fell away, but counters that researchers using other methodologies showed kids in these programs grew up to graduate from high school at higher rates and were less likely to commit crimes.

Grunewald adds that the federal government is also “re-bidding” lower-performing Head Start programs around the country — that is, searching for early childhood education providers with better academic track records.

Also, he says, kids who haven’t attended early learning programs can “catch-up” to their peers — at least in terms of reading and math scores — if good quality elementary schools shower them with educational resources.

The early-learning edge persists in another measure: youngsters’ mastering of “executive function” skills, he says.

These are learned skills which allow children to practice self control, pay attention, control their emotions, wait their turn, follow directions and listen to teachers. These are school-readiness skills that Grunewald and other child development experts say research shows remain with children into adulthood.

These are skills essential to life success, they argue.

Ask Grunewald to demonstrate his claims and he points to re-assessment or ongoing analysis of well-known early childhood education efforts — the Perry Preschool Project in Michigan, Chicago Child-Parent Centers and the Elmira Prenatal/Early Infancy Project — by respected academics, among them James Heckman of the University of Chicago and Arthur Reynolds, now at the University of Minnesota.

Their research “substantiated the long-term effects with high rates of returns,’’ Grunewald said.

By that he means the early scholars graduate from high school and college in greater numbers than those who didn’t have early childhood education. They are less likely to have problems with the law as juveniles. As adults, they are more likely to be employed and paying taxes, healthier, homeowners and financially solvent..

For every $1 spent on early childhood programming, the return is from $4 to $16, Grunewald says, depending on the program.

In his speech Obama zeroed in on an average “more than $7” gained by heading off other social problems such as dropping out of high school, teen pregnancy and violent crime.