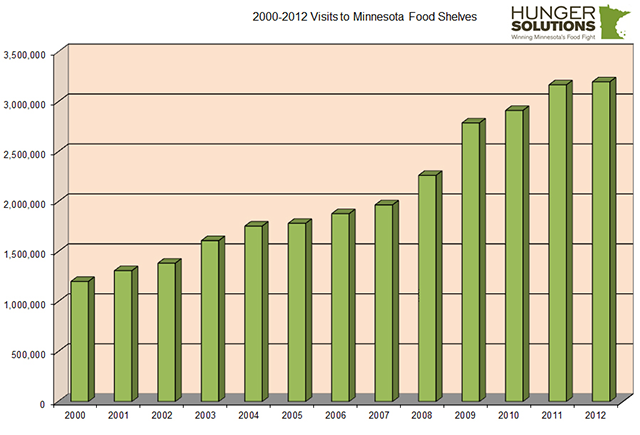 You could say Byron Laher is more sensitive than many to the needs of the hungry.

Sitting for a haircut at his neighborhood Fantastic Sam’s recently, he couldn’t help but ask the stylist: “How’s business?’’Clients are fewer, the tips smaller this month, she said.

Could she use a little extra food, he asked? Yes, she said, if only there were an emergency food shelf open evenings or on the weekends when she is off work. There is, he said, and told her where.

And again: After testifying before the Health and Human Services Finance Committee at the Legislature last week on the dramatic increase in need at emergency food shelves across the state, he had lunch at a Baker’s Square restaurant in Brooklyn Park and overheard a busboy being sent home at 1 p.m. because business was slow that day.

“My first thought is, ‘This guy needs those hours,’’’ says Laher, president of CEAP (Community Emergency Assistance Programs), which operates emergency food shelves at Brooklyn Center and Blaine locations and where the number of families needing food keeps rising — despite economists pronouncements the economy is on the mend. His clients are people working multiple, low-income jobs, Laher says.

Family visits to CEAP food shelves have been rising every January for the last five years, he says, from 895 then to 1,599 in January 2013.

CEAP’s numbers are no anomaly but rather demonstrate need across the state and explain why emergency food providers and Hunger Solutions Minnesota are asking the Legislature for budget increases of $500,000 next year and $500,000 the year after that.

Colleen Moriarity, executive director of Hunger Solutions, acknowledges the increase in need in 2012 was not as steep as it has been in recent years among those using food stamp, food shelves and subsidized school-lunch programs last year.

But what is more significant, she says, is that the numbers of people needing food assistance is not decreasing.

“Simply put, we have become a supermarket for many, many families. We’re not for emergency, we’re not one time. People come to us instead of a supermarket,’’ testified Cathy Maes at the same House hearing. Maes heads the ICA Food Shelf serving Minnetonka and six other western Hennepin County suburbs.

Hunger on the rise

Emergency food providers across the state say hunger has doubled in the last five years, and over the last 10 years the number of visits has risen 164 percent. In 2011, hungry people visited local, metro-area food shelves 1.7 million times.

In the last few months the Minnesota Food HelpLine operated by Hunger Solutions Minnesota has seen a 183 percent increase in calls from hungry people all over the state, though the service connects callers not only to their local food shelf but to other nutrition resources as well.

Anti-hunger advocates are scheduled to bring the numbers to a Senate committee Feb. 27. They say they’ll make a point of arguing the need in rural areas too in communities where there are many unemployed who can’t support the food shelves themselves and rely on state funding.

So, at a time when national and state economies appear to be turning the corner, why is food need not declining?

Laher suggests a part of the reason stems from this being a so-called “jobless recovery” where employers aren’t yet hiring or if they do, according to research, employers are offering salaries 17 percent less than they would have a few years ago.

Further, he says, many of the people coming to his facility work two or three jobs, they don’t have benefits, they’re relatively unskilled so “any problem” – like losing some work hours — “causes a hiccup for them.’’

The hair stylist loses customers and tips but her rent remains the same and she’s got to pay it, so she turns to a food shelf to stretch her food budget, Laher says.