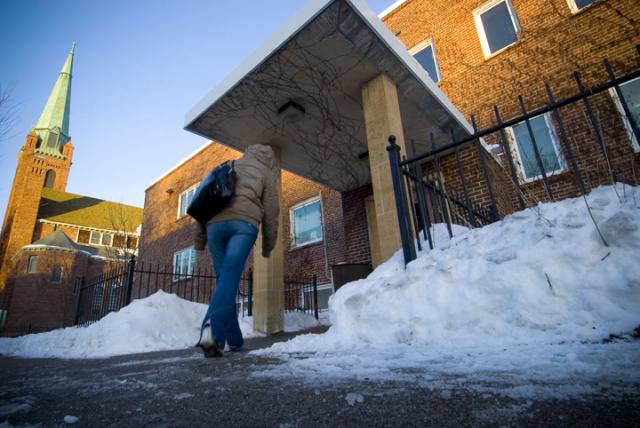 “Emergency shelter use was up throughout the state, but we saw the largest increase in the Twin Cities metro, including the addition of a church basement site less than 30 days before the study,” said study co-director Greg Owen. (MinnPost photo by Bill Kelley)

Even as the state’s jobs numbers get sunnier and the Dow hits an all-time high, the numbers of Minnesota’s homeless are rising as well — though not as fast as a few years ago.

Increases are slowing, down to the single digits.

Homelessness in Minnesota is up about 6 percent since 2009, according to preliminary findings released this afternoon, March, 6 by Wilder Research in the triennial statewide count of adults, youth and children living in shelters, transitional housing and using hot meal programs and drop-in service locations.

That figures out to 10,214 adults, youth and children who were tallied as homeless in the count conducted Oct. 25, 2012, though that number could rise. Interestingly, nearly half (46 percent) of them were age 21 and younger. 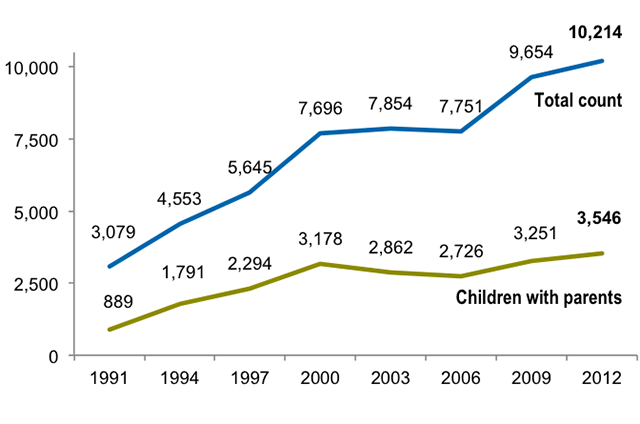 Homelessness in Minnesota is up about 6 percent since 2009. (Source: Wilder Research)

The numbers are vital to lawmakers and social service planners as they consider funding requests and the success of existing homelessness prevention programs.

Not coincidentally, members of the Homes for All, a coalition of housing advocates, service providers and developers, will detail Thursday, March 7, at the state Capitol its 2013 legislative campaign and ask for $50 million in funding to “stabilize families, prevent homelessness and create workforce housing.’’

The slower increase provided no solace to Brian Rusche, who heads up the Joint Religious Legislative Coalition. I caught him on his way to a minimum wage bill hearing at the Capitol.

The homeless numbers, he says, are “clear evidence of market failure, both on the wage side and the housing side, the huge mismatch between people’s income and their ability to secure housing. I don’t like the idea of shelters at all. They’re no more than a temporary fix.

“We’ve got to get upstream,’’ he says, with the state doing a lot more to help by increasing the minimum wage, providing better childcare funding, job training and job opportunities.

“There is a leveling off, to some extent,’’ says Michelle Gerrard (right), co-director of the statewide homeless study. “Some of the efforts being put into getting permanent housing for homeless people are working,’’ she says, including the so-called Heading Home rapid re-housing plans, “but we are still seeing a lot of need.That’s due to the economic forces.’’

Those brighter economic outlooks, she says, have yet to “trickle down to this vulnerable population.” Researchers postulate the economy – with accompanying job losses — can explain the increased numbers of two-parent homeless families with children, but they are only beginning to analyze data that will reveal barriers like mental or physical health issues or job loss.

‘A lot of barriers’

“These people face a lot of barriers. There really is the need to support them, to provide a safety net so they don’t lose their housing,’’ Gerrard says.

The previous statewide homeless count, done in October 2009, figured out at 9,654, which was a 25 percent increase over the 2006 count. Then, in the following May after factoring in counts by the U.S. Department of Housing and Urban Development and a number of independent studies, Wilder adjusted that number to calculate the estimated overall number of homeless in Minnesota at 13,100 on any given night. The 2012 estimate will likely be out this May.

This initial count under-represents the total homeless population, Wilder officials say, because it does not factor in persons “outside the shelter system” – particularly youth — who officials know are without permanent places to stay but cannot be found on the day of the count. That would include couch-hoppers, those staying with friends or family in stop-gap situations.

Other findings ferreted out of count data by Wilder researchers include the following nuggets from their release (additional details here):

The Minnesota Coalition for the Homeless, a member of the Homes for All group, released a brief comment: “The Wilder data shows that no population is immune from homelessness. It’s especially alarming to see that children and youth are most likely to be homeless in our state. This is a critical time to invest in housing.”

This is the first in a series of reports on the numbers with data on background and characteristics of homeless people being released in mid-April.