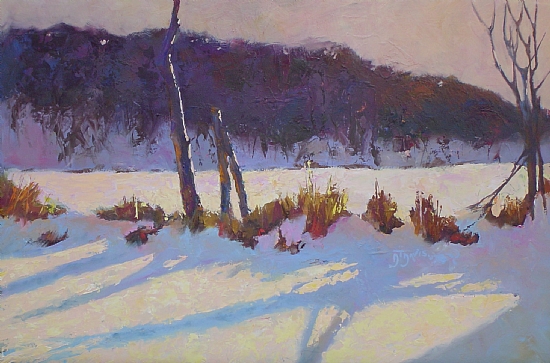 Whether painting a scene of early morning, midday or twilight, Derek Davis tries to capture nature’s elusive qualities. Mood, atmosphere, solitude are words that come to mind when viewing Davis’ oils and watercolors. “I’m looking for a poetic destination,” he says, “and it might be about a mood. Lately I’ve been trying to create work that’s more evocative.”

Expressing the intangible is critical to Davis’ ideas about painting:

“Painting is essentially about communication. What’s really important is that you try to communicate something, instead of just making it a technical exercise. It’s not the artist’s job to simply reproduce what we see. You can do that, but the problem is, when you hit that technical level, most artists quit if they don’t have a goal beyond that. They don’t realize there is life beyond technical ability. It frequently takes artists many years before they get to the point where they realize they need to express, especially in plein air work.”

Artistically, Davis arrives at his “poetic destination” through subtle colors, low contrast, close values and few details. He paints in both low-key, somber hues and higher tonal values, and his brushwork is bold and direct. Viewing both his plein air sketches and more finished pieces, one is struck by the brushwork—few artists can say so much in so few strokes.

Davis’ forte is winter scenes that allow him to experiment with an exciting range of grays. In “Dancing Shadows,” violet tones in the sky, trees and snow create an atmosphere of mystery, and evoke the silence and tranquility of winter twilight. The setting sun glinting off bushes and tree trunks adds a touch of yellow that enlivens the grays and makes the entire composition sing. Hard edges of the foreground tree contrast with the mass of background foliage, creating depth, but Davis also loses some of the upper edge of the tree to create a wonderful soft, painterly effect.

Davis builds a painting through colors and shapes. “It’s been a process to get to that point—learning how not to draw with line but to draw with shapes, and relate shapes and colors and values,” he says. His edges appear and disappear; forms flow into one another, defined through values and hues, rather than line. “Through the Trees” and “Touch of Red” are brilliant orchestrations of lively shapes, reflected light and enthusiastic brushwork. “Up the Hill” is a moody, low-keyed painting, but energetic strokes and an emphasis on large shapes dominate.

In “Crisp November Air” Davis captures the atmosphere of that time of year when autumn transitions into winter. The blues and violets, warms and cools, play off and enhance one another. The canvas is filled with interesting shapes and textures: small, impressionist leaves in the left foreground; larger flat stones to the right; house and web-like tree patterns silhouetted against the evening sky. The painting produces a visceral sense of being outdoors on a chilly November night.

Davis’ use of minimal detail enhances the poetics of his paintings. “Friends” gives us just a hint of trees, bushes, an archway and two figures, all bathed in soft reflected light. A warm red undertone unifies the painting and creates a relaxing mood—there is nothing to jar the senses, no extreme contrasts of lights and darks. Even the dark opening through which the friends are walking is subdued with reds, blues and greens.

In some of Davis’ smaller plein air sketches, every stroke is a color and shape. These paintings verge on the abstract, with only the vaguest reference to nature. “Morning Light on the Prairie” and “Evening Sketch” are beautiful renditions of morning and evening light in high-key hues that Davis has recently returned to after experimenting with more somber tones. Bright colors painted in broad strokes delineate the fields, mountains, sky and other natural elements. “Sketch of Nine Mile Creek,” probably Davis’ most abstract piece, is a vision of nature filled with delicate light, soft greens and violets, and lyrical strokes.

Although self-taught, Davis grew up surrounded and influenced by artists. His mother Marilyn was a plein air painter, and his father Rink was an award-winning sculptor. Landscape painters Leroy Greene and Lyman Rice, along with abstract landscapists Ivan Morrison and Orlin Helgoe, also influenced Davis’s art. Davis remembers that Helgoe “used to come over to my dad’s studio when I was about four or five years old. He was a professor in Colorado and an amazing draftsman. He could draw from memory, and he’d sit down and draw and talk about what he was doing. He’d talk about principles of design and stuff like that. At that age I would think about it, and I stored it subconsciously.”

Helgoe, known as the “Shaman of the Prairie,” painted moody landscapes and symbolic prairie scenes. He is described by poet and writer David Martin as, “one who had absorbed the spirit of earth and sky, and took strength from the visions he received of the prairie. His powerful paintings exhibit that he was one who sought to pierce the veil between the seen and the unseen, to unify the outer landscape with the inner world.”

Among the eclectic influences on Davis’ work we also see aspects of tonalism, an artistic force at the turn of the 20th century and a subtle influence since then on many of America’s best artists. Intimate scenes, simple compositions, subtle gradations of light, minimal detail, soft edges and close values are the qualities we most admire in tonalists like Anton Gag, Arthur Dow and John Twachtman. Their paintings evoke mood, depict atmosphere and express emotion, and we see those qualities in much of Davis’ work—“Friends,” “Nocturne,” “Lake Beauty Shoreline,” “Passing through Hastings” and “Dancing Shadows.”

Despite these diverse influences, Davis is his own person—and artist. His painting has evolved over the years and, like the work of all truly creative individuals who follow their intuitive spirit rather than produce for the market, will continue to develop, possibly in unpredictable directions. Freshness and spontaneity are part of their charm. Davis is fond of a quote by Matisse who, when asked when he was going to find his own style, responded: I hope I never do, for I’d be bored to death.

One thing is certain: Davis is not an artist we can label or pigeonhole—but he is one we should watch and follow.

Derek Davis is currently president of the Outdoor Painters of Minnesota, a plein air group that holds regular paintouts throughout Minnesota. He has a studio in St. Paul and offers plein air lessons at sites throughout the Twin Cities. The next class will begin September 23rd and run through October 28th. Visit his website for information on fees, times, location and materials.

Davis will have new paintings at the AZ Gallery during the St. Paul Art Crawl (October 12, 13 & 14). He will also be part of a new co-op gallery at the Northrup King Building, and will participate in Art Attack, the building’s annual open studio and gallery crawl (November 2, 3 & 4)

In November, Davis will participate in the Outdoor Painters of Minnesota member show opening at the Frameworks Gallery.