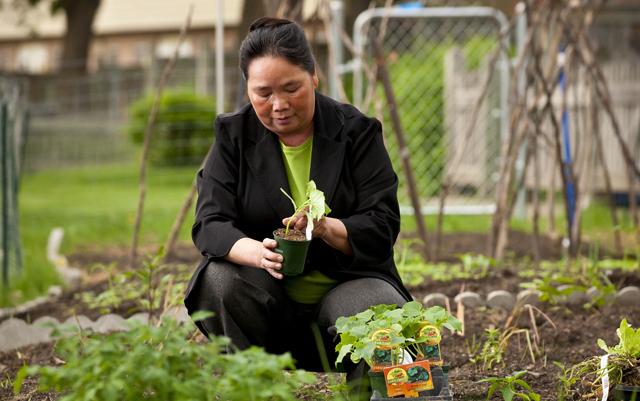 Many gardeners are immigrants to this country, but bring gardening skills from their homelands. (Photo courtesy Minneapolis Department of Health and Family Support)

Growing up on her family’s farm in Uganda decades ago, Harriet Oyera couldn’t have dreamed she would one day grow squash and eggplant in a community garden she started on vacant ground in north Minneapolis.

Nor did immigrants Lee Fong Vang and his wife, Chee Xiong, imagine they would find garden space on Minneapolis public housing land to grow their own tomatoes and hot peppers for their favorite meals.

Yet gardening, it turns out, affords far more than fresh and good-for-you vegetables, especially when it comes to low-income, immigrant communities.

Gardens bridge cultural and language differences and foster a sense of community in a new country, proponents say. Sometimes they generate household income. Consequently, this spring there’s a scramble for more tillable land for community gardens.

Additionally, being able to sow and harvest evokes a comfortable sense of familiarity for many immigrant groups settling into the Twin Cities.

“We are always gardening for food in Thailand and Laos,’’ says Vang, 63, who came to Minnesota seven years ago from Thailand. Over the phone I hear Vang speak loudly and enthusiastically in his native tongue while his son Porchoua Vang, a college student, listens, then translates his words for me.

And, yes, he admits, out there among the tomatoes, he got to know some of his neighbors in the garden, thanks to CAPI, one Minneapolis non-profit behind the green trend.

A green thumb, it turns out, is also a way of reducing isolation among older immigrants particularly, as by definition, a community garden is a group of people coming together on common land to grow plants.

Support from variety of groups

The communal gardening effort is not only growing but also is supported by a variety of individuals, non-profits and religious groups with private and government funding. They provide land and buy seeds and compost as well as gardening tools when needed.

Sometimes there’s an individual who launches such a gardening project, as did Oyera, who because of her garden-founding experience now works as a food justice organizer for the Environmental Justice Advocates of Minnesota.

Sick with diabetes and yearning for fresh vegetables at hand, she coaxed her former employer, Redeemer Lutheran Church in north Minneapolis, a couple of years ago to let her organize an effort to clear away the cigarette butts and litter from a chunk of church land and to spearhead a community garden.

Thirty families went to work and to harvest. Along the way, they and their children grew food and community, she says.

“There is a really high need for this,’’ says Dean Porter, program coordinator for CAPI, a non-profit marking its 30th year of caring for refugees and immigrants.

Just last year the group piloted the community garden project at Glendale Townhomes in SE Minneapolis, where Vang grew his tomatoes on land loaned by the Minneapolis Housing Authority. The project had funding help from SHIP (the Statewide Health Improvement Program) coming through the Minneapolis Department of Health and Family Support.

Still, the launch effort attracted Hmong and East Africans as well as American-born families and resulted in bushels of vegetables, lemon grass and Asian mustard greens, as well as a waiting list.

So this season CAPI staff is negotiating with two churches for more garden space in Brooklyn Center to accommodate 35 waiting families. Success would mean the project could accommodate 60 families and feed upwards of 250 individuals.

Funding this year comes from a $22,000 award from Nature’s Path Organic Gardens For Good program along with $15,000 from the General Mills Foundation to pay for: staffing, recruitment efforts, planting materials and tools, translators and other needs. The program also includes staff to supervise a mini farmers’ market set up at Glendale.

The hope is that last year’s gardeners will continue their planting on their own. This year each will donate a portion of their harvest to the Southeast Asian Foodshelf, Porter says.

Other local efforts include Home Grown Minneapolis, a city initiative to improve the local food system and help residents achieve access to vacant land for community gardens to grow their own.

Getting in touch with the soil and growing things “… is definitely a need of many new immigrants,’’ given their mostly agrarian backgrounds in their native countries, agrees Elizabeth Kackman, who with husband, Tom, founded a flourishing community garden project in Burnsville in 2009 aimed at diverse, low-income populations.

Their gardeners are about 60 percent of African descent from Ethiopia, Somalia, Kenya , Liberia and the Congo or are African-Americans; 5 percent are Latino; 10 percent are Asian, Cambodian or Hmong; and 10 percent are from Russia and the Ukraine. The rest are American and Caucasian, she says.

Life here tends to be distanced from food production. “The typical immigrant comes here and lives in an apartment or town house and they don’t have a place where they can farm. In most of their countries vegetables are the primary food source and meat is the secondary thing, whereas in America vegetables are very expensive and meat is cheap,’’ Kackman says.

Gardens help turn that reality around, as well as strengthen family relationships and build friendships. Kackman says some families bring children to help work theirs and learn how to grow food. Kenyan women often work as a group tending many gardens, she says.

The Kackmans — she a registered nurse and he a home remodeler – started by enlisting the help of International Outreach Church for their first communal growing space: the IOC Community Garden, with 56 garden plots.

By 2010 they had latched on to a (SHIP) grant to further the project and expand to 105 garden plots.

Last growing season the Kackmans founded Woodhill, a non-profit, and partnered with the city of Burnsville to create 48 plots in the Wolk Community Garden, picking up private donations including contributions from Valley Natural Foods, a community foods coop.

This year they hope to install a community kitchen on the Wolk property to promote entrepreneurship. “Say a Latina family wants to can salsa and market it, they would have the opportunity,’’ Kackman explains.

“We’re not just a fad,’’ says Kirsten Saylor, executive director of Gardening Matters, a Minneapolis gardening resource connector and catalyst that four years ago had 200 to 250 community gardens registered on its data base but now boasts 450, the number no doubt inflated by a poor economy and the need for healthy food.

Saylor explains her agency aims to help gardeners of all stripes, whether they dig in their own back yards or at a communal setting.

“There’s a lot of life lessons in gardening,’’ Saylor says. “If it gets stolen, you plant again. If the birds get to it, you plant again.” The nice thing is, in a community garden there’s camaraderie and encouragement, a real support system, she says.