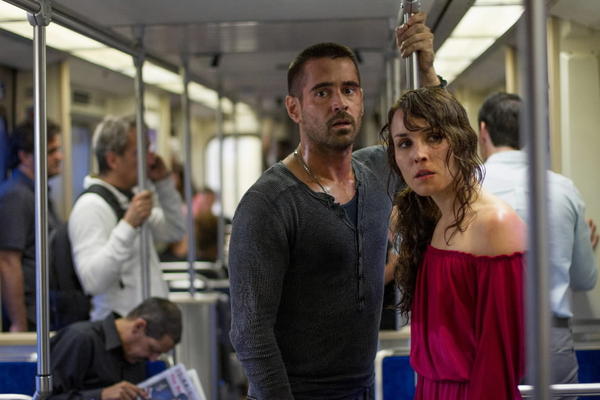 “Revenge Is Coming” is the tagline on the movie poster for Dead Man Down. It’s an apt slogan for a flick that uses revenge as its main focus, hammering the concept into your brain until all you see is the color red and Colin Farrell’s stony stare. That hammering doesn’t come in swift, easy strokes, however. Instead, the deliverance of revenge is swept up in waves of unnecessary plot decisions and murky character development, making Dead Man Down a thriller that sinks under its weighty premises.

Victor (Colin Farrell) doesn’t talk much. In fact, he tries to keep a low profile around his apartment complex because his line of work doesn’t make him an ideal candidate for social butterfly of the block. Victor works for New York City crime lord Alphonse (Terrence Howard), and he doesn’t just open doors for the guy. No, Victor is the type of employee who kills for his boss. Blasting holes in someone, after all, can be just another day’s work in the life of a criminal kingpin’s henchman.

But the old phrase, “Don’t judge a book by its cover,” really applies to Victor. Though cold and distant on the outside, on the inside Victor pulsates with warm, livid rage, a rage that’s focused on his boss. Alphonse did something to Victor’s life in the past; back when Victor wasn’t known as “Victor.” Alphonse’s decision took away the loves of Victor’s life, leaving only a dark void that thirsts for revenge. Victor went undercover and worked his way up the ranks of Alphonse’s gang, becoming a trusted right-hand man who’s just waiting for the perfect moment to grab his boss by the throat and give him what-for. Victor’s looking to bring down Alphonse’s entire posse for what they did to him, but a newcomer to the group, the well-meaning Darcy (Dominic Cooper), may complicate Victor’s plans for total vengeance, as the new kid on the block has admirable, family-centric morals and a strong desire to keep Alphonse safe.

Enter Beatrice (Noomi Rapace), a woman who lives in the apartment across the way from Victor’s. Beatrice is a damaged woman, having survived a car accident with a drunk driver only to have one side of her face marred with scars. The kids who hang out at the nearby park call her “Monster.” The cruel word is even scrawled across her front door. Beatrice lives with her near-deaf mother (Isabelle Huppert). She’s trying to put the accident behind her and move on with her life. But she can’t. She wants revenge on the drunk driver, and after she sees and films Victor killing another man through his apartment window, she blackmails him into agreeing to kill her own enemy.

Though it may sound neat and tidy on paper (or not), the plot of Dead Man Down is really a mess. There are two paths of revenge that don’t relate well to each other, and yet screenwriter J.H. Wyman spends much of the movie trying to compare the two. The first one-third of the movie explores Victor’s storyline and his reasons for wanting to kill Alphonse, and then in walks Beatrice with a completely different revenge quest that becomes a distraction from the one we just got comfortable with. Beatrice’s plight is intriguing, and there are some neat metaphorical supplements to her character (damaged face equals damaged soul, etc.), but by midway through the movie it becomes apparent that Wyman is trying to tell two radically different stories. The result of meshing them together is no more successful than the toddler who tries to put the square puzzle piece into the circular hole of their play set.

The acting doesn’t do much to save the floundering story. In the lead role, Farrell doesn’t create a compelling character. He puts on a grim henchman mask for Alphonse, but when he gets home that mask rarely comes off. All we get to see is the henchman he poses as. We never get to know the real Victor, the man who is fueled by a complex set of emotions. Something needs to be shown on the surface, and other than looking like he wants to punch a hole through the wall 24 hours a day, Farrell doesn’t let anything on the inside show in his gaze or facial expressions.

Rapace isn’t any better. As Beatrice, she gets to explore more emotional territory than the moody Farrell, but she comes across as annoying rather than endearing, probably because her character and her story feel like they belong in a different movie, like perhaps a drama-comedy, not an ultra-grim thriller. Rapace shares a lot of screen time with Farrell. Their characters get romantically involved over time, but it’s an odd romance, folks. Victor and Beatrice are not compatible in any big way. When they go out together, Victor hardly talks and Beatrice throws random temper tantrums, resulting in some very awkward scenes that are laughable when they’re meant to be heartfelt. By keeping Victor a quiet and intense figure while having Beatrice be a capable damsel in distress, Wyman and director Niels Arden Oplev end up trying to replicate the Ryan Gosling/Carey Mulligan romance in 2011’s Drive. They unfortunately cannot grasp their predecessor’s sincerity or confidence in handling a complicated romance.

As the head honcho bad guy, Howard has moments where he scares your pants off, but he never gets enough screen time to make you love to hate him. Howard does bring a convincing screen presence, using his resonating voice, unwavering gaze, and chilling chuckle to create a believable portrait of an intimidating crime lord. By the time the film’s climax comes into play, however, Howard’s character is reduced to a bumbling charade that does not stay true to the memorable villain created in the film’s earlier moments.

There are some bright spots to be found amid this dreary landscape. Dominic Cooper actually steals the show as Darcy, the hardworking gang member who wants to do good by his boss so he can provide a stable home life for his wife and infant child. Cooper really gets immersed in his role. Born in Greenwich, London, Cooper wields a Bronx accent with the confidence of a man who grew up in the shipyards of the Big Apple. His piercing gaze conveys playfulness, seriousness, and deadliness with equal zest. Cooper makes Darcy feel like a guy plucked from the culture of Ben Affleck’s masterful 2010 film, The Town, a great compliment to any character in an East Coast crime flick.

Dead Man Down at least tries to be an action-thriller flick with a brain. But Wyman’s many plot layers prove to be tedious rather than smart, and the stale acting only brings the whole affair further down into the depths of mediocrity. There are scenes when the suspense is tightly wrought and the tension is palpable, but those scenes are too few and far between to make Dead Man Down a recommendable movie to see in theaters. If you are a fan of Terrence Howard or Dominic Cooper, then rent this movie on a day when it’s raining outside and your expectations aren’t high.

Dead Man Down is rated R for violence, language throughout and a scene of sexuality. It was given a wide United States release on March 8, 2013.