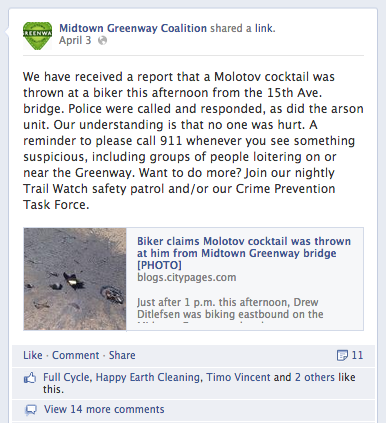 So… have you heard the one about the biker who nearly got hit by a Molotov cocktail on the Midtown Greenway?

Nope, that’s not a joke–it’s a story that’s been circulating since last week, quickly surpassing the boundaries of the bicycling community and making its way into the mainstream media. MPR reported that Drew Ditlefsen “was riding on the below-grade portion of the Greenway that runs on an old railroad bed below the street in the Midtown area. He said someone threw the makeshift firebomb at him from the 15th Avenue overpass. He said the bottle narrowly missed him, hit the pavement and burst into flames.”

Unfortunately, the Greenway is no stranger to crime. In late 2008, we reported that the Minneapolis Police Department’s Third Precinct had issued an alert regarding a series of robberies and assaults on the Greenway, mostly occuring after dark. The Midtown Greenway Coalition launched a safety patrol in response to the string of incidents.

A few years later, our own Jeremy Iggers was attacked on the Greenway on his way to work. (He quickly posted a status update on Facebook–the reponses to which are worth checking out.)

This time around, the Midtown Greenway Coalition is requesting additional safety precautions from the city, according to the latest from MPR. It is also considering hiring private security to patrol the route to supplement the efforts of the Trail Watch safety patrol (which, by the way, is looking for more volunteers).

But hey–&$%* happens, and it happens everywhere. As Midtown Greenway Coalition Executive Director Soren Jensen told CBS, every year something like 1.5 million bike trips take place on the Midtown Greenway, while fewer than five such incidents are reported in that time.

Minnesota Public Radio reports that police have identified two juvenile suspects in the molotov cocktail case. “Police spokesman Sgt. Stephen McCarty says the suspects are not teenagers and may be too young to be charged. He said the case has since been sent to the Hennepin County Attorney’s office.”

Said CBS: “Investigators are not aware of the kids’ motive.”

Check out these other TCDP articles on the Midtown Greenway: