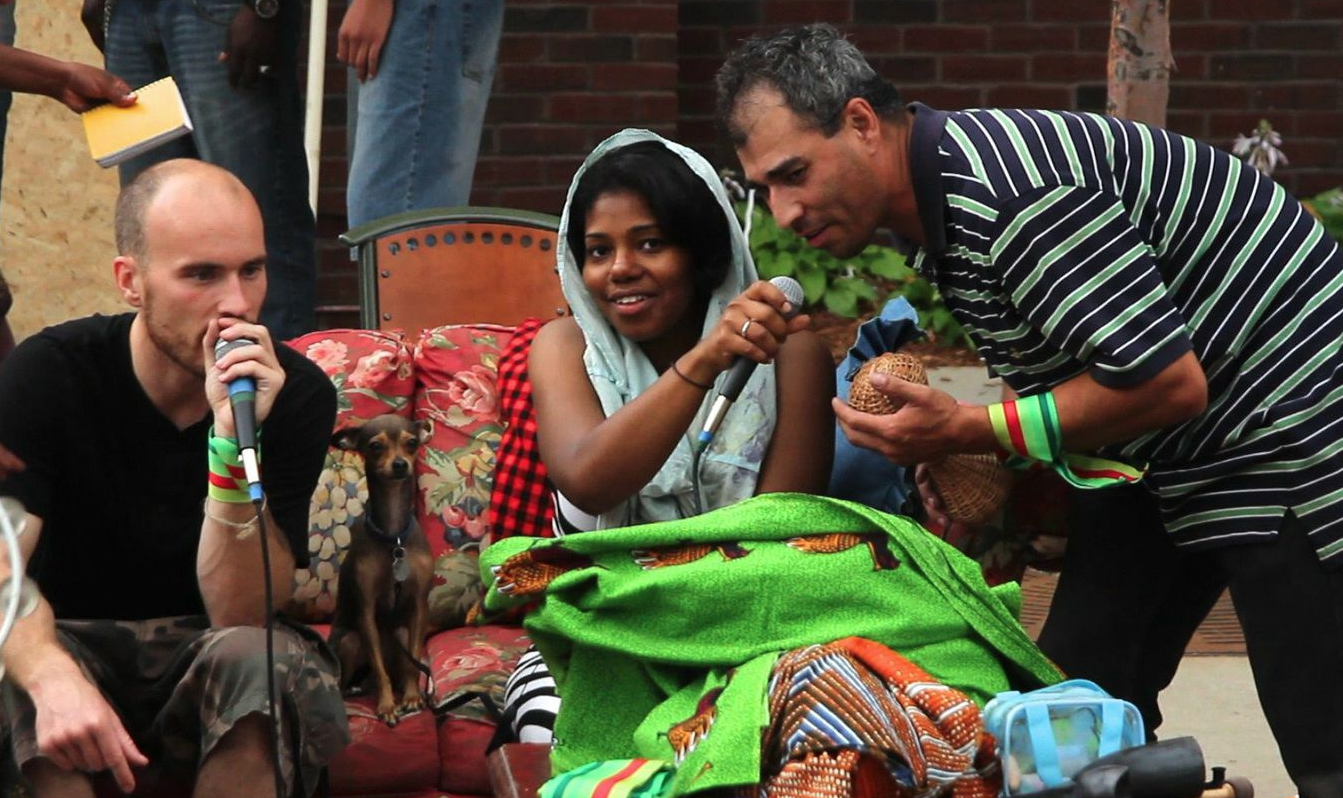 Singing games of Sound and Power at Open Streets

How do you create a soundtrack for a neighborhood? Would the sounds be from early morning? Late in the day? Who are the people that would sing, play instruments or speak for that neighborhood? These are the questions Mankwe Ndosi asked herself when she took on a massive public art project called Soundtrack of Phillips. Minneapolis Saint Paul International Film Festival goers will have a chance to see and hear a small snippet of this project tonight as documentary filmmaker Mark Wojahn will premier his short film about Ndosi’s project. Wojahn followed Ndosi around last summer as she invited the community to sing karaoke, create their own music and  tell her what they hear when they walk down the street. It screens tonight April 14th  and 16th with Operation Popcorn at Saint Anthony Main at 7pm. It’s also set to screen on April 25th at 1pm at the Best Buy Theater in the Northrup Auditorium.

Musician, sound artist and community activist Mankwe Ndosi began the project by using her gift as a musician to get people to see the beauty in every day life. Every day life for her, is the Phillips neighborhood in South Minneapolis-a pocket of the city that to many, represents the world. Celebrating the bravery and tenacity of a part of the city many people take for granted were some of the goals of this project as well as showcasing its beauty.

“It’s kind of a love song to my neighborhood,” Ndosi said.

Regular engagement in the neighborhood began in 2011 after training at Hope Community on East Franklin Avenue. It continued as a community listening project, taking place on couches on neighborhood street corners and community centers all over Phillips where people talked about their lives and shared stories. In 2014, Ndosi was awarded a prestigious McKnight Project Grant from Forecast Public Art Works to mount the project. She brought in her long time collaborator Medium Zach, from Big Quarters to help record and shape the project. That’s where Mark Wojahn came in.

Wojahn, an award winning documentary filmmaker, whose works include last year’s short about artist Liz Miller, a sold out screening of Trampoline, a 2010 documentary about a family living in Minneapolis and the infamous What America Needs from 2003, is no stranger to creating work that is relevant and meaningful for audiences.

Being a good documentary filmmaker is being able to harness the chaos of situations and create something that brings the viewer right there effortlessly and easy. Wojahn said his job was made easier by interviewing Ndosi towards the end f the project. It gave him time to ruminate on what she’d done and the things he’d seen and heard. It started with this question:

“Can you talk to the camera as a listener? How would you teach the camera how to listen?”

Ndosi said part of what she liked about working with him was his ability to be invisible, despite his size (Wojahn is really tall).

“He was able to capture the things that I couldn’t be there for…girls singing in the park. He gathered the emotion, the energy, the magic and ambition of this project,” said Ndosi

The short film is gorgeous. It’s really a testament as to why people live in Minnesota in the first place. People and places pop out at you in high definition. The color of the neighborhood comes alive as wind blows by, soccer tournaments are held, and girls sing on a nearby playground.

Wojahn does a beautiful job of harnessing the energy of some of the scenes. A rain soaked jam session with Ndosi during last year’s Open Streets on Franklin Avenue. Close ups of children drawing with chalk, a small dog sitting on someone’s lap and Somali girls and boys playing in the park pull us in and embrace us.

It’s all lovely. It’s the soundtrack of Phillips.

You can find out more about Wojahn’s films here http://www.markwojahn.com/

More about Mankwe Ndosi and the project here mankwendosi.com and

Singing games of Sound and Power at Open Streets

Girls in the park with Reggie Prim and Mankwe Ndosi