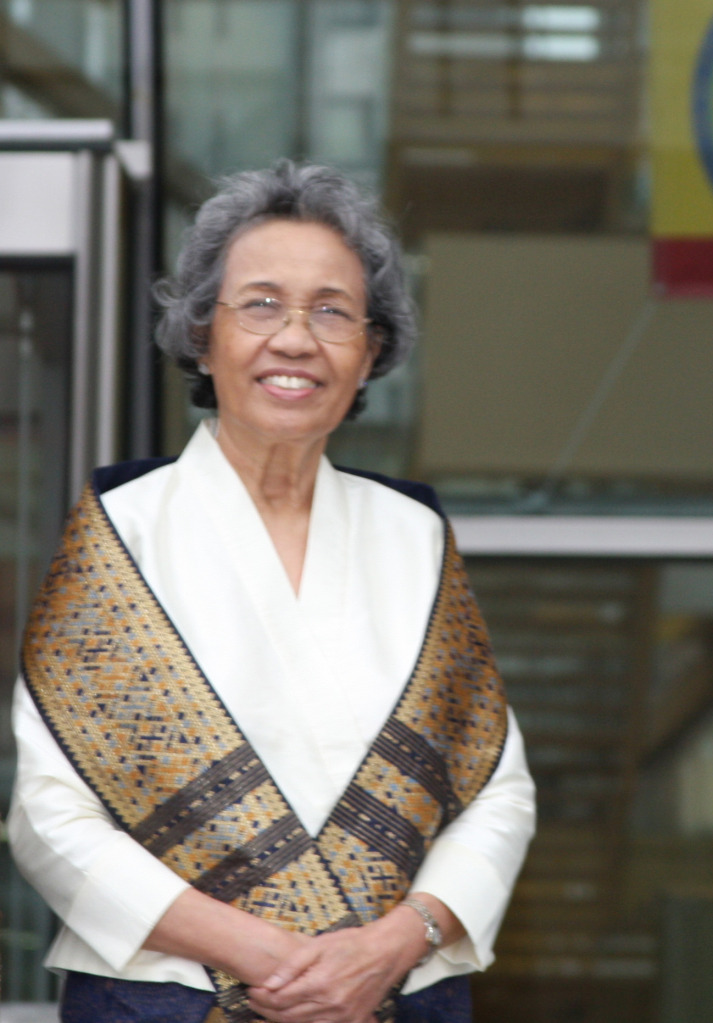 On May 13, the state-appointed Council of Asian Pacific Minnesotans is honoring Laotian traditional weaver Bounxou Chanthraphone with a lifetime achievement award in the arts as part of its annual Heritage Dinner at the Earle Brown Center.

Out of 21,000 Asian Pacific Minnesotans in the state, she is just one of only three people being recognized through the annual leadership awards. The others are Dr. Adisack Nhouyvanisvong for his leadership in education and Mr. Hung D. Phung for his humanitarian work.

FULL DISCLOSURE: The author nominated Bonxou Chanthraphone for this award.

These awards are given only once in a person’s lifetime and reflect a decision made among over 60 Asian American and Pacific Islander communities who build their lives in Minnesota.

It was my pleasure and an honor to nominate her for this award for many reasons, not the least being my conviction that when we have living treasures among us, we should recognize them and honor those achievements.

As the undisputed master weaver in our community among the 200,000+ Lao in the US, she also has the distinction of being a 2000 National Endowment for the Arts National Heritage Fellow, a recipient of the prestigious Bush Artist Fellowship, and most recently the inaugural Bush Enduring Vision Fellowship.

To put the National Heritage Fellowships of the NEA into context: These are a once-in-a-lifetime award to honor and preserve our nation’s diverse cultural heritage, given only to master folk and traditional artists. This is one of the highest recognitions an artist can receive from the US government, and she was just 1 of 13 people so selected in 2000.

More importantly, over the years, she paved the way for many Laotians to see not just the craft but the art that our textile traditions can embody, and the significance of handcrafted work that goes beyond what machine-programmed looms achieve. She has helped connect us all to one another through her art and life’s work.

Madame Chanthraphone was born in 1947 in the town of Savannakhet, in central Laos. She learned Lao weaving techniques from her mother and grandmother, and soon studied more formally, learning the weaving techniques and designs of her native central region and of the northern and southern regions, among other techniques.

Her expertise allows her to weave single strands of linen, cotton, silk, and other materials into the traditional patterns, including the intricate symbols and geometric designs. She uses pigments derived from natural substances including berries, roots, and tree bark. These skills are then used to weave traditional Lao skirts, dancing costumes, wall hangings and other textiles. But how do those skills get applied among American materials and opportunities? That is one of the things she has explored for almost 3 decades since she came to the US in 1982.

In Laos, she had been training as a teacher in the city of Vientiane, and during the 1960s she became an elementary teacher  for eight years. Ultimately, in 1975 with the end of the war, she and her family fled and spent time in the refugee camp in Thailand. In Thailand, she was able to support her family in part through her weaving, even amidst so much uncertainty for the future.

Arriving in the US to rebuild her life, she continued to teach her skills formally to many through programs with the Lao PTA and CAPI, the Center for Asian and Pacific Islanders.

One of the significant things I respect about her work is that she has consistently insisted not just on preserving the traditional patterns and motifs but engaging them dynamically.

With her best pieces, we are looking at something more than handcrafts but actual objects of art that connect us back not only to our heritage of the last six hundred years in Laos but something we can consider and present to future generations.

As Minnesotans celebrating Asian American and Pacific Islander Heritage Month, I feel we can take pride and joy not only in her accomplishments but the doors she has opened for so many others in the years ahead, adding magnificently to the great tapestry of the human journey.

She is currently working on a new book and other efforts to document her life’s work and I’m looking forward to seeing her family and others continue these traditions. I hope it won’t be too long before we see a new exhibit of hers in our community.