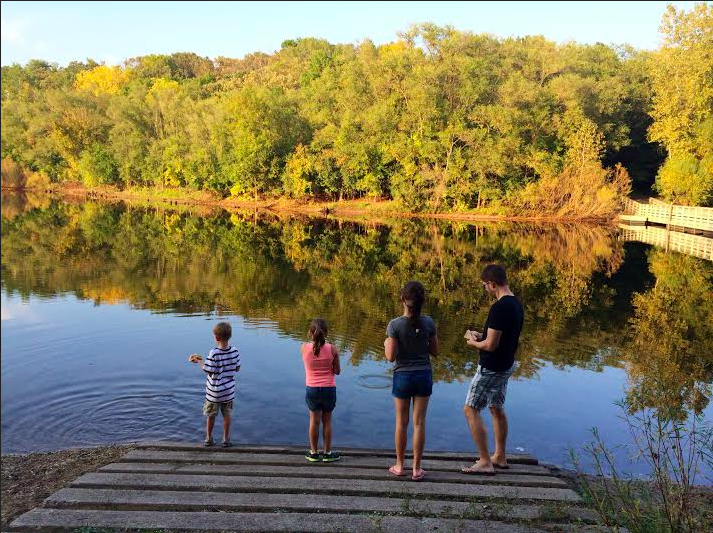 In the 14 years that I’ve lived in Minnesota, our family has been invited to exactly five Jewish holiday celebrations, and three of them were within the last month.

I think this “statistic” speaks to one big reason why our family is still unaffiliated.

When I first moved here from California, Jason and I visited what felt like a million synagogues, looking for one to call home. Once we had children, we repeated the process of attending services and schmoozing at onegs and visiting sukkahs and dressing up for Purim carnivals and bringing dishes to share at New Member Picnics with a few Tot Shabbats thrown in for good measure.

No matter the event, the experience was eerily similar. We’d arrive wearing – and acting – our temple best and I’d have that excited First Day of School (Shul!) feeling that former and current teachers can identify in anyone at anytime.

We’d sit, we’d join, we’d meet. My, “We’re new here!” announcement was always met with bright smiles and some version of, “You’ll love it here. SUCH nice people.” And then, whoever it was would wave good-bye, walk away, join the lovely people that they were already friends with.

Many (truly, many) articles have been written about what Minnesota Nice actually looks – and feels – like. Spoiler alert: The weather isn’t the only thing that’s cold around these parts. I love Lauren Yen’s analysis on NPR, “Newcomers say it’s ‘nice,’ but not warm,” and The Fourth Crown blog made me laugh with their version, “10 Differences Between “Minnesota Nice” and “Passive Aggression” mostly because the truth hurts, but it’s also laugh-out-loud funny.

In my 14-year experience, Minnesotans are nice, but they tend to keep a bit of distance. They’re very settled in their routines and their friendships and their people, and they don’t often have, or need or make, room for new people. This isn’t their instinct.

I’ve found this to be especially true of the Minnesota Jewish community that, outside of our synagogue visits, has been hard to pinpoint and find. There’s a reason for this, too.

People who are involved in the Jewish Minnesota scene are very involved in it. They’re busy with synagogue and Sunday school and Hebrew school. Many live in certain areas of The Cities. And their community is right there; there’s no need to travel, or look, very far outside of it.

Every six months or so Jason and I have the same conversation about joining a synagogue. My cries for community are met with his for balance. Our attempts to look for ways to meet both of our wants end in a stalemate and the conversation is dropped, only to come up again a few months later.

This summer, we came the closest we’ve come in a long time to joining a synagogue; community was within fingertip reach. We’d met two families who live nearby and have kids our kids’ ages and were willing to expand their communities (those three holiday invitations this month came from them). I was smitten and I wanted more. So Jason and I had our twice-yearly chat a little bit early and agreed to call their synagogue to discuss membership.

But we were met with the price stumbling block.

Jason’s request for balance in our lives isn’t unreasonable. He wants our family to have many pieces to our puzzle, and sports and music and family time shouldn’t disappear beneath the weight of Judaism. And for those in it, it probably doesn’t. But before you’re committed, on the outside looking in if you will, when you’re looking at two important family topics, budget and schedule, joining does feel like a big slice of both.

And the third, probably most important, part of this decision-making is that our past experiences with Minnesota Nice and the Minnesota Jewish community leads us to wonder if joining a synagogue will necessarily lead us to the community we crave.

The truth is that we don’t know. There are no guarantees, which makes us a little bit gun-shy about taking this chance; we’ve reached a stalemate again.

So I don’t have a pretty bow to conclude this article with, but I would love to know what you think. Are you affiliated? Why or why not? If you are, how does synagogue life fit in with the rest of your family’s demands? And, most importantly, have you found community there?