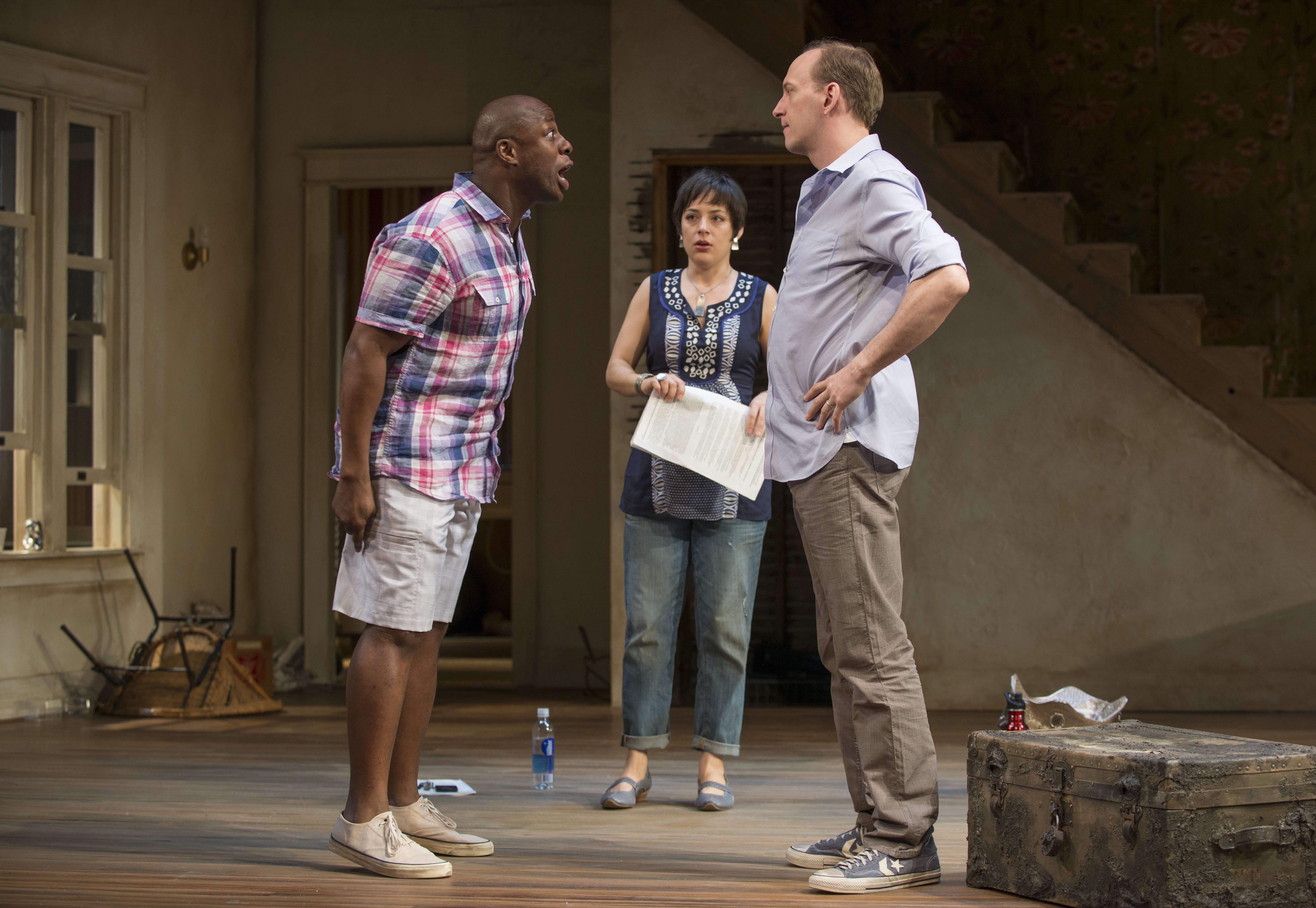 Clybourne Park is a significant play. It won the 2011 Pulitzer Prize in Drama and, in 2012, was awarded the Tony Award for best Broadway drama. A cursory glance over the schedules for regional theater in the past two years suggests that it is the most widely produced play in the country. The Guthrie has made a major investment in the play, from hiring a top notch production team and cast to building an enormous, complex set, and booking the play for a lengthy run of eight weeks. On the night I attended, most of the apparently full house (around 700) at the McGuire Proscenium Stage—almost all of whom were, like me, white—loved the play. They laughed, clapped at various moments, and provided  a standing ovation at the curtain call.

The playwright, Bruce Norris, and the Guthrie’s publicity apparatus insist that their goal is not merely to entertain, but to promote a serious conversation about “race.” In the program book, Norris’s comment that “I WANT THERE TO BE AN ARGUMENT” not only appears in caps but is set off in a brightly colored box. However, there is not one single critical comment about the play in the program book. In the resource guide, provided on the Guthrie’s website (how many of you went on line and downloaded the resource guide?), there is exactly one critique, a brief statement by Baltimore Center Stage artistic director, Kwame Kwei-Armah. He is quoted in an excerpt of an article from the New York Times, cautioning that the message of Clybourne Park is that “whites build and blacks destroy.” Kwei-Armah has gone further than this statement. While his theater has been yet another regional company to stage Clybourne Park, he has written a new play, Beneatha’s Place, which he produced in conjunction with Clybourne Park this past spring, as “The Raisin Cycle.”  (Please bookmark this information—will the Guthrie or any other regional theater produce Beneatha’s Place?) Kwei-Armah’s comment is the single criticism in the Guthrie’s resource guide. As an educator, I know that it is hard for students (audience members, readers) to formulate criticisms without sufficient analytical resources. Otherwise, the process seems akin to the sound of one hand clapping.

The play hinges on a brilliant—and cynical—twist: In Act II, the actors from Act I play new characters, 50 years later, amidst a ragged and deteriorated house (in sharp contrast to the well-maintained white-owned house sought by African American buyers in Act I). The two African American characters (im)pose a series of obstacles to the white wannabe purchasers. The tense discussion devolves into a series of offensive racist and homophobic “jokes” and jibes in which the African American characters give as well as receive. If we are “all” racists, as Norris suggests, then there is nothing we can do about racism. We must, I suppose, own and embrace our own inner racist. And then move on with our lives. Given “real world” developments this past week, I urge you to Google “Support Paula Deen” to taste the saliency of such ideas.

I suppose one might argue that some of us will have power and privilege on this journey, while others of us will not. But the play does not raise that question. Indeed, “Clybourne Park” presents racism as solely a matter of attitude and interpersonal behavior. Structural racism, what my friend and mentor Mahmoud El-Kati insists on naming “white supremacy,” is rendered invisible by the playwright, the director, the production. There are playwrights who do explore, expose, and engage the impact of institutional inequality—Naomi Wallace, Kia Corthron, Danai Gurira, Amiri Baraka, Athol Fugard, and the late August Wilson, to name a few off the top of my head—but we are not likely to see their work being produced by major regional theaters. Particularly in this so-called “post-civil rights era” when we can point to a Black man in the White House and assure ourselves that “everyone” has prejudices and biases, even us. And our prejudices and biases are all equal. Clybourne Park confirms us in our belief in our inherent goodness without asking us to interrogate the historic roots of our privileges and socio-economic positions. Whatever happened to the analytical insight of the early 1970s—to wit, we are all prejudiced, but racism equals prejudice and the power to implement our prejudice? Oops. Norris must have been absent the day that was discussed.

In the program notes, Norris writes that he was motivated to write this play by his reaction to Raisin, specifically to the absence of white characters and that the only white character was a “villain.” So Norris sets out to give white people/characters voice, presence, and tangibility. That has been the project of most professional theater (and literature and poetry) for hundreds of years, and there is nothing particularly creative, brave, or courageous about Norris taking up this time-worn task. But it is particularly disturbing that, while reiterating this “white” agenda, Norris has also fallen into the most tried and true trope of white writers, the creation of minstrelized “Black” characters. The “Black” characters so courageously and creatively embodied by Ansa Akyea and Sha Cage, in both acts of Clybourne Park, were constructed as if seventy years had not passed since Hattie McDaniel and Butterfly McQueen were positioned in Gone With the Wind. What research has Norris done? Has he listened to the voices of Shirley Chisholm, Fannie Lou Hamer, Mamie Till Bradley, Ella Baker, Angela Davis, and Elaine Brown, to name but a few African American women rather than “Black female characters”? Has he weighed their ideas? Or has he, in an all-too-familiar ventriloquism, put his own words in their mouths? When Sha Cage’s character finally gets the floor in Act II to make her case challenging a gentrification process which will erase 50 years of African American presence, what does she say? Can any of you recreate her argument? It’s gibberish.

Clybourne Park thus not only renders invisible the important history of racial inequality in the United States and its intersections with class dynamics, but it is yet another sad example of our deep history of minstrelsy. Why then is it so popular? That’s a big topic. Let me just suggest for now that these are hard times, troubling times, that what some want to call a “post-civil rights era” is better understood as a post-Keynesian/post-New Deal era. For many white people, particularly since the crash of 2007-08, these are times of insecurity and doubt, of debt and burden, of a challenging present and an uncertain future. Whether it is the young white woman in Texas who sued the University of Texas that their affirmative action admissions procedures discriminated against her, or the southern state legislators and governors who contend that the 1965 Voting Rights Act discriminates against them, or many, many of us (“us” being white people) who realize that the American economic pie is shrinking and our racial status no longer guarantees us and our loved ones continuing access to sizable slices of that pie, we are feeling insecure, uncomfortable, even angry. Clybourne Park, like so much of the cultural capital created over the past two centuries in the United States, directs our anger in a safe direction—downward at people of color—rather than in the more dangerous direction of the 1%, those who have continued to prosper as we have struggled.

Perhaps it is silly of me to expect the Guthrie Theater and other major regional theaters to provide audiences with cultural perspectives which encourage critical thinking about such issues. That’s why theater companies like Pillsbury House, Frank Theater, Mixed Blood, Penumbra, Pangea, Theatre Mu, Dreamland Arts, Carlyle Brown and Company, and others exists here in the Twin Cities. But they are consigned to the margins most of the time, while we are asked, again and again, to absorb theater which leaves us smug and satisfied.