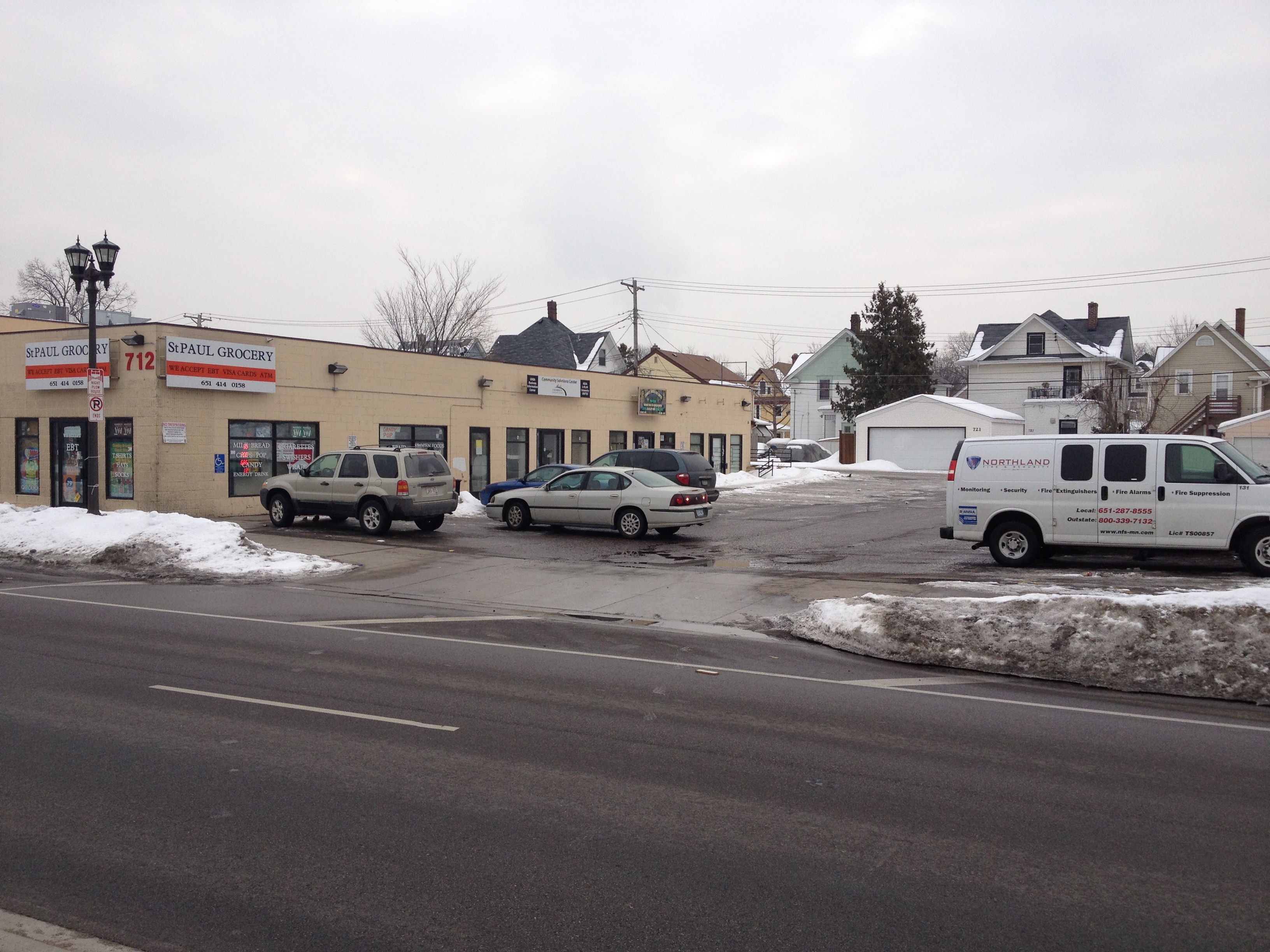 A parking lot is usually a place where people come and go, but the parking lot at the corner of University Avenue and Grotto Street has recently become a hangout space for young people and a hotspot for crime, according to St. Paul police and community residents. The lot next to St. Paul Grocery at 712 University Avenue has seen nearly 100 reported calls according to a Saint Paul Police Department report for the specific address. [See PDFs of reports below.]

On Wednesday February 20, a community meeting at Rondo Community Outreach Library organized by the Aurora/St. Anthony Neighborhood Development Corporation brought together the owner of the lot, a City Council representative, the St. Paul Police Department, and concerned members of the community both young and old who discussed underlying reasons for crime in the parking lot and strategies to prevent further criminal activity.

“We need to find out what young people today want and how we can pull them out of parking lots,” stressed NAACP member and longtime neighborhood resident, Marquitta Ransom.

“There is no other place in the immediate neighborhood to go,” explained long-time resident B. Hayden. “People from out of town see groups meeting in the lot and come to sell drugs or represent their gangs.”

The youth present at the meeting said the crime rate in the lot can be explained socially. St. Paul Grocery is one of the few places to hang out at later at night.

Shon Pierson, 22, said this lot serves as a “community outpost” because there is a corner store that serves as a central location connecting people who have not seen each other in awhile. “Because people are coming together there will inevitably be people in bad favor with each other,” he said.

“People stay at the store because the Rec closes at 9,” added 15 year old Trell Freman. Freman is referring to the West Minnehaha Recreation Center, which is open Tuesdays and Thursdays 3-9 p.m., Mondays and Wednesdays 3-8 p.m., Fridays 3-6 p.m., and is closed on weekends.

According to Daisy Huang, the owner of the lot next to St. Paul Grocery, the loss of parking throughout the neighborhood is the core reason for the uptick in crime in her 712 University lot.

University Avenue has seen more than 80 percent of street-side parking vanish since construction of the Central Corridor transit line began, according to the Metropolitan Council.

Noel Nix, an aide to city council member Melvin Carter III, informed members at the meeting, “The City Council is hoping to have broader community dialogue about what a four-lane University Avenue would look like in terms of parking.” He added that Councilmembers Melvin Carter III and Russell Stark are in conversation with the Public Works Department about how to add more parking back to the street.

St. Paul Police Department Crime Prevention Coordinator Ruthann Eide stressed the responsibility storeowners have in reducing crime outside of their store. “If a store owner is skilled in developing relationships with people it makes it much easier to eliminate some problems out in front,” Eide said.

Everyone present was in agreement that the community needs to develop a place for youth to go after dark.

“If you give someone an option of somewhere to go other than home they may not have, or corner store, [they] will not be at places you don’t want them to be,” said Pierson, who suggested a theater, coffee shop, and diner as possible solutions.

Nix stressed the need for business growth in the community. “If business is going well on the avenue, people can give money and non-profits would match,” he said. He added that the crime prevention process starts with non-profit partners to decide on things for kids to do. He acknowledged that the city is being forced to make difficult decisions. “We are in a position to see what Rec centers we can keep open now.”

Everyone present agreed there was a need for a future meeting to give youth input in the kinds of activities they want to be open late at night.

The presence of the youth at the meeting was a “good sign for the community,” said Nix. He emphasized the importance of community involvement in designing solutions to prevent crime.