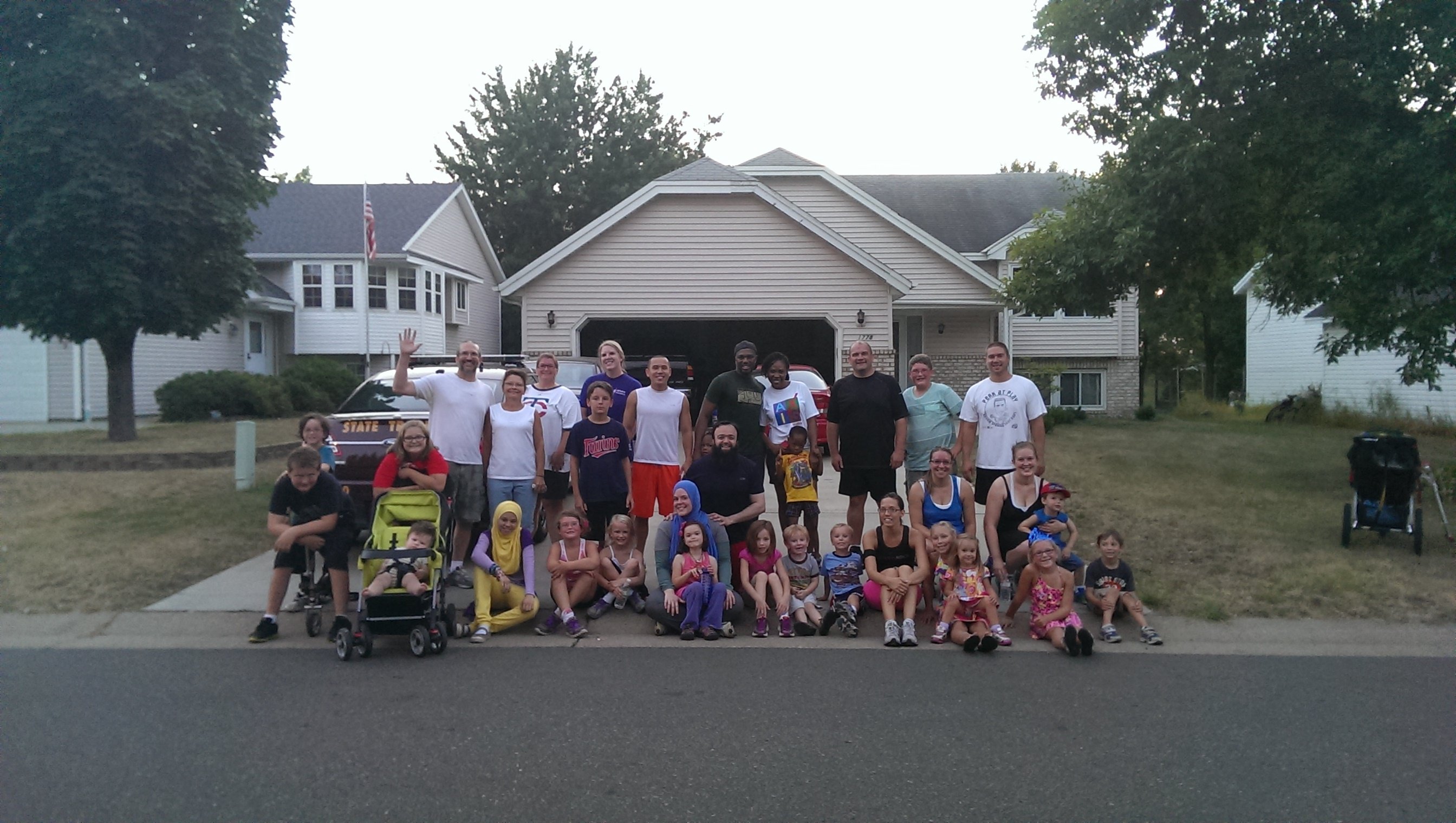 On a hot summer day, a group of neighbors gathered in a yard to talk and stretch. Kids played and laughed. Even though it was one of the hottest days of the year with a high of 94 degrees, these neighbors were getting ready to run a mile together, something they do every single day.

They run on the street they live on, past well kept modest homes, freshly mowed lawns, and well tended gardens, past neighbors they know and neighbors they haven’t met yet. To the latter, they call out “welcome, join us!” And some do while others promise they’ll join next time.

In a time when there are so many initiatives to make neighborhoods and communities healthier, how did this particular one occur?

Mohammad Zafar and his wife, Sarah, recently moved with their children to Oakdale, MN, a small city just east of the Twin Cities. Mohammad and Sarah were looking to boost their health, and they talked about running as a great option. Realizing that Ramadan was coming up, they decided to set a goal to run one mile for each day of Ramadan or 30 Miles for Ramadan. Mohammad decided to start a Facebook page to keep him accountable, and he thought it might motivate others to do the same.

One day, Mohammad was sitting in the backyard, talking with his neighbor, Duane Stine, and he told him about his plan for 30 Miles for Ramadan. As Duane tells it, “I said, well, if you want somebody to run with, I’ll run with you.” And so the two neighbors started running a mile each night. And this got the attention of their neighbors.

A Minnesota state trooper, Chang Her, lives across the street from Mohammad, and he runs with the group almost every night. “I’ve been here three years, and in the past three years, I’ve waved hi and that’s pretty much it. But this year, I know the names and faces, we talk, and you know who your neighbors really are. And this street, people fly by, but with us out every night, people have started slowing down. There’s kids in the neighborhood, and they’re paying attention – they know we’re out here.”

Neighbor, Adejoke Ejiofor, heard about the running club on Facebook. She works odd hours and only knew a couple people in the neighborhood since they moved here four years ago. “Now we know so many people, and my kids are socializing so much. My daughter loves it. She always is saying, ‘Mommy, it’s time to go.'” 30 Miles for Ramadan turned into the Helena Running Club, and half the participating members are children, the youngest being 7 months old (he rides in a stroller). Amaiya, 13, says, “It was my idea for the kids to join in. My favorite part is seeing all the neighbors and getting to hang out with everybody.” Becca, age 12, says, “You accomplish something and you feel great. I did it! I did it!” Evan, age 10, told me, “At first it hurts your upper chest, but you keep going and get used to it, and the pain, it stops.” Madeline, 7, says, “I like running because it’s cool to exercise. It’s just awesome!” Mujahid, Mohammad’s eight-year old son finishes the one mile run every day a minute faster than his dad and loves it. He and Olivia, 7, often outrun the crowd. Even two-year old Kenny runs the full mile with the group.

Heather Mast says, “The kids are the biggest inspiration to get us all out here every night. They’re the ones who want to run and say, ‘Mom, I want to go running,’ so it’s a huge inspiration for us.”

The Helena Running Club also gets together outside of running. They organized a National Night Out, and one night they hooked up a projector and showed a kids movie on a garage door. Neighbors contributed the projector, extension cords, and made popcorn. It was a hit, and they have plans to show more movies. “It all started with Mohammad and Sarah, and they’re the newest ones to the neighborhood,” says Tony Sabelko.

The Helena Running Club takes a photo each night after the run. Says, Duane, “The running takes 15 minutes and afterwards we socialize for 45 minutes. It’s about the socializing. Some people walk or jog, they do what they can. The key is to provide the opportunity. It’s achievable for just about everybody. We have a lot of diversity in this neighborhood, and we share this one activity. It’s a building block.”

In the last month there has also been what Mohammad calls “guest runners from out of town” joining after seeing the Facebook page. They have come from as far as Pennsylvania, and the Helena Running Club has pictures to prove it. One of the Facebook page fans has now started running in their own neighborhood in hopes to replicate the same.

Mohammad couldn’t be more thrilled. He has been passionate about health and wellness since his teen years working out at a gym in Eagan. When his own father’s health was failing, Mohammad understood the value of understanding a family’s health history. When he enrolled at Metropolitan State University, he decided to dedicate his life to health and wellness, even starting a student organization, Hope Within U, which focuses on health and wellness education. Now he’s in the final stages of defending his thesis as a community psychologist, and he works in Financial Aid and teaches health and wellness including self-defense classes. He’s thrilled that his neighborhood runs together. “It’s important to start from where we are and move forward. Health is everything.”

Several neighbors are running for the first time in their lives. The enthusiasm of their kids encouraged them to brave the first mile. The running club is more than health and wellness, it’s community building at its finest. Neighbors are sharing information, helping each other by providing baby sitters last minute, running over groceries when needed, and spending time together and enjoying each other’s company. On the hottest, most humid days, when it would be easier to stay in the cool refuge of their own homes, they motivate each other to get outside and participate. In a time, when most Americans don’t know their neighbors, the Helena Running Club is breaking the mold.