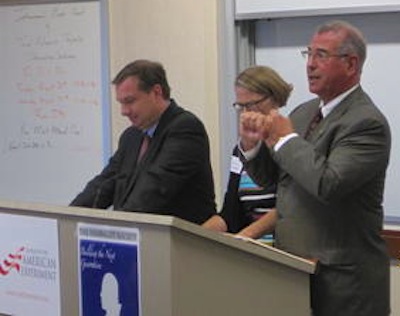 An overflow crowd filled a lecture room at the University of St. Thomas Law School for an aggressive debate on the Voter ID Amendment on September 10. Sounds of approval and disapproval signaled their close attention to Hennepin County Attorney Michael Freeman and conservative political journalist John Fund.

The proposed amendment would require all eligible voters to present valid, government issued photo identification at the polls. The St. Thomas debate was organized by the University of St. Thomas Chapter and the Minnesota Lawyers Chapter of the Federalist Society and co-sponsored by Minnesota Free Market Institute and Center of the American Experiment. Freeman represented a Democratic stance on the amendment while Fund argued a conservative position.

Freeman, whose responsibility is to review Hennepin County elections for irregularities, asserted that voter fraud is not an issue in Minnesota and in his “fourteen years as Hennepin County attorney, there have been no cases of voter impersonation, no organized fraud or manipulation of voters.” He said the only recent irregular election encounter in Minnesota was ineligible voters who were felons voting before their civil rights had been fully restored. Additionally, Freeman claimed the amendment will be expensive, costing more than $50 million to counties, imposing unnecessary and restrictive to seniors and students, and taking away from those who have earned the right to vote such as military persons serving overseas.

Fund, an active contributor to Fox News and other major news media, and author of several books including Stealing Elections: How Voter Fraud Threatens Our Democracy, announced a slogan in favor of the amendment:  “Let’s make it easy to vote and hard to cheat.”

“Let’s get everyone an ID,” he said. “Let’s have a massive outreach effort, and let’s spend some money.” Fund said that in order to be a functioning member of mainstream society, an ID is needed. He continued with examples of voter fraud in several southern and eastern states such as Rhode Island, Arkansa and Florida. Fund addressed only two questionable instances in Minnesota, including the case of felons voting before their rights were restored and false addresses. He estimated that groups fighting Voter ID, given publicity cost and legal bills, have spent well over $10 million dollars nationwide on this effort. Fund urged listeners to spend instead on the amendment and concluded saying we have a civil right “to not have our vote cancelled out; disenfranchised because someone is voting who is illegal, not a citizen, a felon who hasn’t had their rights restored, dead, or is from out of state for the day.”

After the individual statements, the debate followed with heavy questioning and aggressive arguing from both debaters and the audience. For more in-depth information on the Voters’ ID amendment, follow this link: https://www.tcdailyplanet.net/voter-id-amendment