Edina, MN, resident Dan Nye posed six questions about the Minnesota Marriage Amendment in Saturday’s Star Tribune and asked for reasonable, “civil responses without name-calling.” Conversations with open-minded people like Mr. Nye are just what we’re all hoping for.

1. “Were our ancestors all dumb and bigoted because they thought homosexuality was wrong?”

As I’m sure you can appreciate, Mr. Nye, earlier generations lacked tools like telescopes, carbon dating, psychological inventories, genetic mapping, and Mythbusters, all of which have changed our understanding of human nature and the natural world.

For example, in 1633 Galileo, who supported Copernicus’s theory that the Earth was not at the center of the universe, was put on trial and sentenced by the Catholic Church for suspicion of heresy.

Of course, attitudes toward many institutions have changed over time. For one thing, ancient Greeks and Romans accepted and even elevated homosexuality. The American Psychiatric Association altered its categorization of homosexuality as a mental illness in 1972. As you likely heard, last year, the U.S. military allowed gays and lesbians to openly defend our freedom.

Perhaps because Monday is Martin Luther King Day, I hope you’ll consider how in the 21st-century we have enlightened attitudes toward slavery, the right of women to vote, and the effectiveness of a passing offense versus a rushing offense in the NFL.

Only in 1992 did the Church apologize to Galileo for its action. I suspect gays and lesbians hope it won’t take 359 years to overturn a voter-approved Minnesota Marriage Amendment.

Footnote: My wife and I spent quite a day at Museum of Torture in Santillana del Mar, Spain, viewing, well, not “our” ancestors’ collection of instruments of torture during the Spanish Inquisition. Highly recommended! 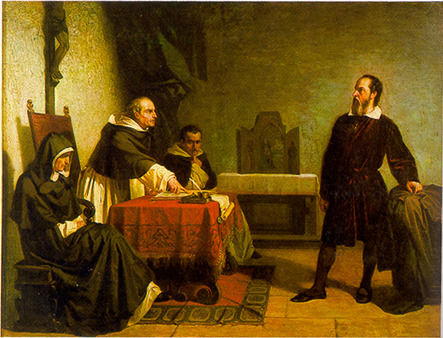 2. “Don’t our sexual organs exist for reproduction? How does homosexuality square with that?”

Mr. Nye, your question presupposes that sex is not for pleasure. I would argue that your premise is fallacious, and thus the implication that gays and lesbians are not entitled to sexual pleasure is quite debatable.

Yes, our sexual organs exist for reproduction. But biblical passages do not downplay human beings’ ability to experience pleasure during sexual relations. As GotMinistries notes, “Song of Solomon is so detailed in its intention of sexual pleasure in marriage that allegories were used to tone it down and Hebrew boys couldn’t read it until they were 12, when they became men. God clearly intended sex in marriage to be pleasurable.”

Judaism teaches sex is for pleasure as well as procreation. More specifically, “sex is the woman’s right, not the man’s. A man has a duty to give his wife sex regularly and to ensure that sex is pleasurable for her [and] to watch for signs that his wife wants sex.” Hindus believe that sexual pleasure, kama (sensual pleasure), is one of the four purusharthas or aims of life (dharma, arta, kama, and moksha).

In this short post I won’t try to sort out Christian and Muslim attitudes toward sexual pleasure. Being open-minded, you might want to consider reading this short history of sexuality and pleasure in Christian teaching and practice.

3. “It is no secret that the human sex drive is a lot stronger than is needed for reproduction. Do we just give into those desires, or do we try to control them? The ancients told us that controlling our physical desires is one of the things that distinguish us from the beasts. Sexual desires, if not controlled, easily lead us into trouble.”

I’m not sure how your point relates to same-sex marriage. As Jonathan Rauch has written, marriage is a commitment between not only two people but between a couple and their community. It’s an institution that by its nature results in “controlling our desires,” in your words. Community endorsement of gay couples and lesbian couples and marriage is, by definition, profamily. Isn’t that what you want?

4. Why does the nature argument work for homosexuality but not the others . . .among other things, adultery, pedophilia and bestiality ? Why should homosexuality, which was once included in this group, be moved to normal sexuality? Is it based on an argument that there is no moral choice involved in homosexuality; that it is a product of nature? Couldn’t others in the group above use the same argument — they just couldn’t help themselves — they were born with those desires?”

I appreciate your desire to stay civil, Mr. Nye. But what you asked is borderline name-calling, in your words. Underlying your question is the suggestion that only gays and lesbians practice adultery (Amy Koch notwithstanding), pedophilia, and bestiality. Not true! Not true! Yet we’ve allowed straight marriage for many years.

In any case, no one is pushing for legalized adultery (a crime in Minnesota), pedophilia (a crime everywhere), and bestiality (ish. You and I can agree on that one!). Loving gay and lesbian couples—two people—just want to get married, raise their kids in healthy, two-parent households, and shop together at Macy’s white sale for flannel sheets. They don’t want sex with a Holstein cow.

You know, I have yet to read a compelling argument that same-sex marriage hurts straight people (that’s me and my wife, for example). If you have one, please email me at 365prettygoodreasons@gmail.com

Um, maybe you’re talking about J. Edgar Hoover. Otherwise, I really don’t know how to answer that one.

6. If there is a God who is opposed to homosexuality, as many religions claim, they may be doing indescribable harm to those they are patting on the back, and most likely to themselves.

As someone whose ancestors came to America in search of religious liberty, I appreciate your right to practice your religious traditions in your own faith community. If your teaching ascribes “indescribable harm” to same-sex same sex, thank God in American you have liberty to practice your beliefs. By the same token, I hope you respect my freedom as an American citizen to belong to a different religious tradition with different values and beliefs.

That aside, opponents to the marriage amendment do not think a constitutional amendment respects American conservative traditions of limited government and reluctance to change the Constitution.

Having said that, if you, like Reverend Jerry Falwell, believe God seeks vengeance on gays, I will continue to pray for you.

I would love to have a guest post from you in response, Mr. Nye! 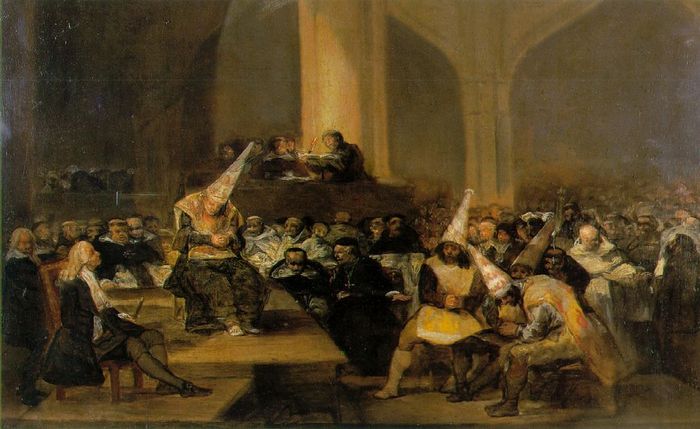 Painting of the Inquisition courtesy by Goya Wikimedia Commons.