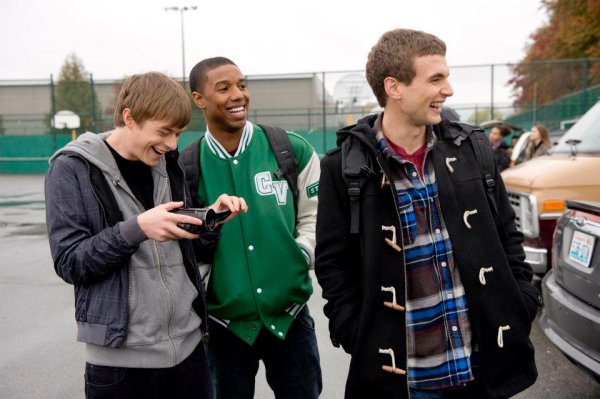 High school students have a hectic lifestyle. There’s homework to do, friends to hang out with, bullies to avoid, college applications to be filled out, and student leadership positions to be sought out. Don’t forget about flowering romantic relationships, the pep rallies, and the rigorous after-school sports schedules. These events alone are enough to make a teenager’s life interesting, but what if you threw in superpowers on top of all of that? That is exactly what happens in the new camera point-of-view, or found footage, movie Chronicle. The result of such a mash-up is a fast-paced story that takes interesting characters and puts them in interesting, often deadly, situations.

Chronicle centers on three main characters, all of them high school students: shy loner Andrew Detmer (Dane DeHaan), philosopher quoting Matt Garetty (Alex Russell), and likable, popular Steve Montgomery (Michael B. Jordan). One night the three boys discover a giant hole in the ground in the woods. They enter the creepy hole and encounter a crystalline alien mechanism. Noses bleed, Andrew screams, and the screen cuts to blackness. The next we see the three boys, they are able to move objects with their minds. Soon they add flying to their newfound skills list. These are awesome revelations that the boys indulge in with glee equivalent to a monkey in a banana store. But things eventually get out of hand for the talented trio, as factors from Andrew’s home life threaten to destroy friendship and endanger lives.

Even though Chronicle has a running time of 1 hour and 23 minutes, it feels a lot longer because of the layered buildup to the climax. This masterful pacing comes courtesy of screenwriter Max Landis. In case you’re wondering, yes, Max is the son of legendary director John Landis. And yes, the moviemaking skills run in the family. Landis does everything right with his screenplay. The first fifteen minutes shows you what Andrew and Matt are like before they get their powers. The next forty-five minutes show the three boys screwing around with their telekinesis abilities. This segment is extremely relevant because it depicts what I think actual teenage boys would do if they gained extraordinary abilities. Each of the boys does something mischievous like levitating a teddy bear in front of a little girl or moving a woman’s car to a different parking space while she goes shopping. In the final third of the movie, Landis sets the giggle-inducing antics aside and puts his characters through a meat-grinder of death, betrayal, loyalty, and desperation. Landis never commits the sin of wasting a scene by using it as filler. Every minute of the film’s 83 serves a vital purpose in plot progression.

The actors fulfill every lofty expectation of Landis’s screenplay. Leading a cast of relatively unknown names, DeHaan handles a difficult role with the finesse and consideration of a seasoned veteran. DeHaan plays a character who wants to be left alone but isn’t allowed to be. Andrew’s home is booby trapped with bad vibes. His dad, played by Michael Kelly (who many might remember as stubborn security guard CJ from 2004’s Dawn of the Dead), is an abusive drunk living off of insurance. Meanwhile, Andrew’s mom has a terminal illness and slips farther into death’s grasp every day. When Andrew gets his powers, you see him become happy and get accepted as a cool cat among his student body. But as a boy who has been an outcast his entire life, Andrew becomes suspicious of people being nice to him, and this suspicion grows into a brooding hatred that is only electrified by his powers. DeHaan realistically portrays these emotional transformations.

An unlikely friend of Andrew, Steve is brought to life by Jordan with the energy of a Mötley Crüe song. With his easygoing smile, confident body language, and upbeat personality, Jordan is believable as a boy who is in top form to become class president. It’s interesting to see a popular guy hang out with loner Andrew. For instance, it’s neat to see what kinds of subjects get brought up in a conversation between two guys who have nothing in common besides their powers.

Not to be left out of the limelight is Russell, who plays Matt, your average Joe middleman. Matt is the glue that holds the group together. He’s the responsible one. After it becomes evident that everyone’s powers are increasing in strength, Matt insists that rules be formed to ensure that nothing bad happens because of their abilities. Matt is silly at the film’s beginning, but by the end he inherits a sober look on life that makes him the decider of what to do with Andrew and his recklessness.

The actors in Chronicle get plenty of close-ups because the entire movie is filmed from the point of view of handheld cameras and security cameras. This found footage style is effective in the film’s first hour. Rookie director Josh Trank uses the camera POV to make both extraordinary and mundane events seem tangible. You’ll feel like you’re flying next to the boys as the camera zooms through clouds and swerves around lightning bolts. Later, after the boys are earthbound again, you can feel the calm intimacy of a sleepover as the camera floats above the three as they drift into sleep. This first hour regularly uses only two cameras. The film’s climactic battle, however, constantly skips around to at least ten different cameras, a lot of which are far away from the action. This creates a jerky, disjointed effect that takes you away from the battle when you want to be close enough to feel the fighters’ breath on your face. You could argue that the whole movie could have been better had Trank not used the Blair Witch Project filming style at all. I don’t think the movie would have been better, but yes, it probably would have been just as good.

Chronicle is funny, dramatic, and smart: a through and through solid movie. I give it four and one-half stars out of five, or an A-.

Chronicle is rated PG-13 for intense action and violence, thematic material, some language, sexual content and teen drinking. It has a running time of 1 hour and 23 minutes, and was released to theaters nationwide on February 3, 2012.