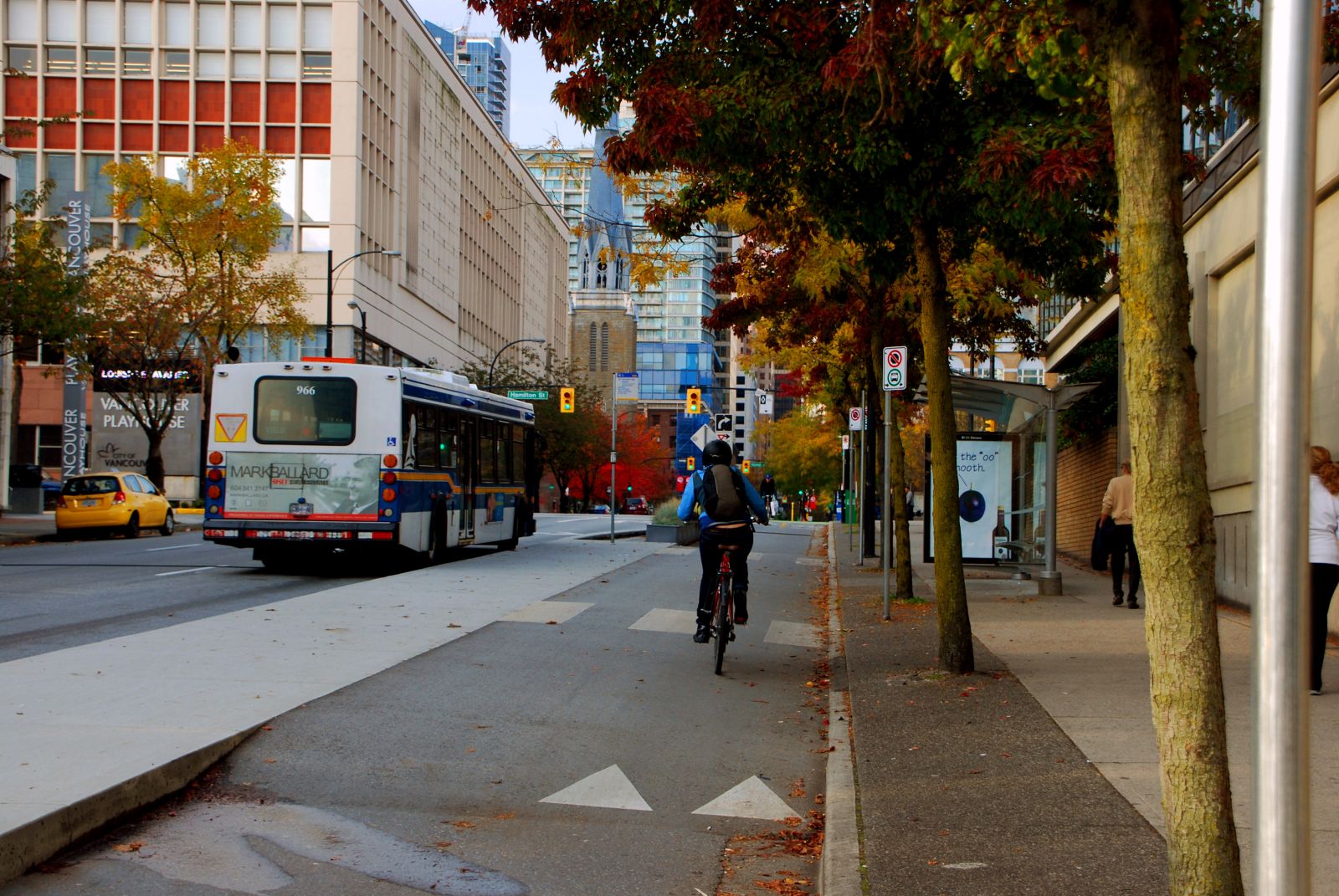 At a public meeting May 14 (from 5-7pm at Mill City Museum), Hennepin County will offer four design options for Washington Avenue downtown. (Note that each option presumes 6 lanes between Hennepin Avenue and 5th Avenue South. We strongly support 5 lanes instead with more space for greening, cycletrack, and sidewalk. You can see our prefered layout here.)

We strongly support having a well-designed protected bikeway (or cycletrack) on Washington (Layouts 3A or 3B as discussed below). We need to build bikeways that attract the roughly 60 percent of people who are interested in biking, but concerned about riding in traffic next to cars, buses and trucks. Protected bikeways feel safer and attract new riders. They can work for kids, seniors, parents with a toddler in a Burley, and everyone in between. They encourage more shopping at local businesses and a livelier street environment.

Riding in a protected bikeway is five times safer than biking on the street or in a painted bike lane, according to a University of British Columbia study. A new cycletrack on Pennsylvania Avenueincreased ridership by 200% in Washington, D.C. in the first year. After construction of a protected bikeway in New York City, local businesses saw a 49 percent increase in retail sales.

We will insist that the protected bikeway be well designed. That includes high-visibility crossings at intersections, separate bicycle signals where appropriate, smart interactions with bus stops, and clear delineation of the bikeway so people walking (including blind people) do not inadvertently end up in the bikeway.

The options Hennepin County will present the public meeting (as presented at a design workshop May 3; these are not yet available online):

We don’t understand why this option is even up for consideration. Washington is on the City’s Bicycle Master Plan map. Hennepin County has a Complete Streets policy. Bicycling was tied for the top ranked priority at the first open house and the third ranked (of eight options) in the online survey. None of the groups at stakeholder design workshops left out a bike facility. There is clearly space for a bicycle facility under any scenario. This shouldn’t be on the table and honestly reflects the work that still needs to happen to routinely incorporate bicycling into projects from the start.

While bike lanes are much better than nothing, most people will not ride in an on-street bike lane next to fast moving traffic with only a painted line to separate them. This has been shown in cities across the world and is readily apparent when you compare who rides on trails versus who rides in bike lanes in Minneapolis. Given the opportunity on Washington to build something to serve the next 50+ years, we do not feel an on-road bike lane is adequate.

This option has a 5-foot wide protected bikeway separated from the road by a curb and a 2-foot buffer zone. A 6-foot wide green and furniture zone separates the bikeway from the main walking area. This proposal does a nice job of separating people biking from people walking, but offers a less than ideal barrier between the bikeway and the street.

We do not have a strong preference between 3A and 3B and would prefer a 5-lane street that allows the best of both of those proposals.

•       Layout 3B: Cycle Track Adjacent to the Pedestrian Zone

This option has a nice 7-foot wide green and furniture zone separating the bikeway from the street. The 5-foot wide protected bikeway is separated from the sidewalk by a 2-foot buffer. County staff says that material and color differences would help differentiate the bikeway from the sidewalk to reduce conflicts, but it is admittedly less than ideal with such a narrow buffer. The bikeway would be brought closer to the street near intersections to increase visibility.

Again, we do not have a strong preference between 3A and 3B and would prefer a 5-lane street that allows the best of both of those proposals.

Photo: A protected bikeway in downtown Vancouver (source). Coverage of issues and events affecting Central Corridor communities is funded in part by a grant from the Central Corridor Funders Collaborative.