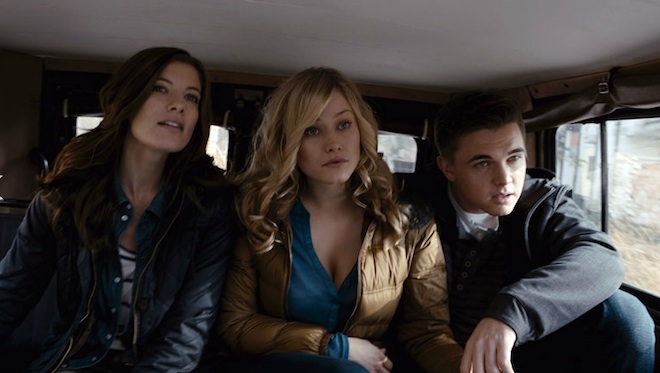 In director Bradley Parker’s horror film Chernobyl Diaries, six young adults hire an extreme tour guide to take them to the Ukrainian city of Pripyat, a place that was abruptly abandoned on April 26, 1986, when the Chernobyl Nuclear Power Plant suffered an explosion and subsequent fires in one of its reactors. It is a travel destination that should not be penciled into a tourist’s schedule. Radioactive levels still exist in Pripyat: the closer you get to the power plant, the louder the Geiger counter yells at you. In addition to the dangers of being exposed to radiation, the deafening silence and desolated state of Pripyat makes it one hell of an ideal setting for a horror movie. Parker takes advantage of his setting, the cast makes the most of their roles, and the screenwriters inject the script with formulaic horror movie serum: a fine product of the nail-biting genre is produced.

Uri and the group get all the sweaty-palm vibes they can handle when, after a day of poking through vacated apartments and playgrounds and streets, their ride into town, a camouflaged van, doesn’t start. Somebody or something chewed up the van’s wires. When night falls, and the windows fog up, creepy hoots and hollers drift through the air. Uri goes outside to investigate, and things start to get bad. It’s not long before matters become fight-or-flight lethal for the tourists.

Chernobyl Diaries is Parker’s first foray into directing; he turns in a solid debut behind the camera. The film’s pacing is spot-on. Parker and writers Oren Peli (the mastermind who kick-started the Paranormal Activity franchise on a budget of $15,000), Carey Van Dyke and Shane Van Dyke give you time to know the characters before they are put in a horror scenario. Okay, so maybe an unstable brother-to-brother connection, an upcoming proposal, and a woman straight out of a derailed relationship are plot devices we’ve already seen in Dawson’s Creek. The cast, however, is game enough to put a realistic spin on everything the script throws at them.

One dogged actor who really steps above his character’s expectations is Nathan Phillips. Sporting a shaggy beard that makes him unrecognizable from his role as an Australian Outback backpacker in the much-talked-about 2005 independent horror film Wolf Creek, Phillips is endearing, sympathetic, and easy to root for as Michael in Chernobyl Diaries. When Phillips first showed up onscreen with costar Berdal wrapped in his arms, I thought I was looking at a disposable body for the baddies to chomp apart before the central, more important “safe” characters were hunted down. Phillips apparently never got the memo. Instead of being forgettable, Phillips makes quick, smart decisions that give the group a fighting chance. He’s also the voice of reason, counterattacking Sadowski’s brash, sometimes thoughtless actions.

It’s amazing that Phillips can keep a level head in the film’s apprehensive, suffocating environment. Parker depicts Pripyat as a giant, open-air haunted house that has nasty things hiding not just around the corner, but in the river and the cafeteria as well. The script is a holding house for multiple fiendish things that wish to rip the meat right off the bones of the stranded travelers. Parker doles out these diversified enemies carefully. Smacks against the van at night plant seeds of fear. A figure standing in the window of a recently shot photograph spreads roots of panic. Then the shadow-clingers of the abandoned city step into the light, and the panic is flooded by full-on hysteria.

Parker uses a less-is-more approach when filming the horror scenes, and this classic technique pays off, because the scariest parts of Chernobyl Diaries happen off screen. In one hand-wringing scene, for instance, two characters walk out of sight around a bend in the trees. Gunshots ring out, white light dazzling the night for a brief moment before one person returns with a bone sticking out of their leg. I didn’t see what happened out in the woods, but all sorts of terrifying images went through my mind based on what the injured person says. It’s refreshing for a movie to leave room for imagination in an era when big-budget blockbusters are intent on displaying everything in eye-bulging 3D, leaving no room for mystery.

The build-up to the carnage does lag in parts, and you might find yourself on the brink of yawning before Parker throws a morsel of terror at you. Chernobyl Diaries doesn’t shake the horror genre to its core, but it can definitely be archived as a solid contribution.

Chernobyl Diaries is rated R, has a running time of 1 hour and 30 minutes, and was released to United States theaters on May 25, 2012.