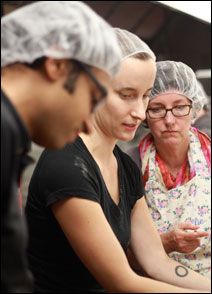 Some people pen protest signs and take to the streets or parks or Wall Street to make a social point, but a Minneapolis woman bakes apple pies.

In what some might call a whopping slice of Minnesota Nice, Melanie Christensen spent 29 hours making and baking 156 apple pies last weekend with a little help from some friends to raise money for a local charity and make her point that “food can strengthen a community.”

Christensen is her own kind of locavore, stressing the values of “growing for yourself, cooking for yourself,” and teaching the younger generation alternatives to fast food and highly processed food.

It’s the second year in a row that Christensen, 30, an insurance actuary at Allianz Life and math teacher at the University of Minnesota, took up her apple peeler and rolling pin for a good cause. Last year she made 100 pies for Youth Farm and Market Project.

“I actually had never baked a pie before last year,” she laughs, “but, you know, it is kind of mathematical.” Establish a process and start mixing.

Money raised, about $5,000 so far this year, goes to Kindred Kitchen, an aptly described food-business incubator in North Minneapolis and a program of Catalyst Community Partners, a non-profit begun by commercial developer Stuart Ackerberg. Christensen merely sent them an email proposing her charity bake-off and they happily agreed to the idea. 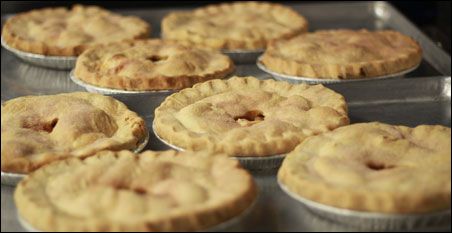 Some of Melanie Christensen’s 156 apple pies.

What she likes about the year-old Kindred Kitchen is its grassroots mission. The nonprofit offers classes to local food business entrepreneurs, which means anyone who lives, works or worships in North Minneapolis. Classes span the gamut from how to start and support a business to food handling, food safety, marketing, licensure and related topics. The pie money goes toward scholarships for local folks to pay for the classes, which regularly cost $30 a piece or $400 for a series of 15.

Playfully upping the ante, folks at Kindred Kitchen challenged the pie mega baker to a pie-making contest, putting 22 bakers in their kitchen on West Broadway to work rolling out crusts and filling 144 pies. Flour, sugar and Haralson apples were donated.

Still, a flour-dusted Christensen hampered a little by a “pretty bad” oven burn on her arm, walked away the winner. On Friday night, six friends and family members helped her bake 56 pies at Kindred Kitchen, in their commercial kitchen and teaching space. But she baked the other 100 by herself in her home oven Saturday and Sunday, four at a time.

“Her pies were beautiful. Every single one came out looking perfect. She definitely beat us in the looks department, how attractive the pies were,” says Terese Hill, Kindred Kitchen’s director who also teaches food labs at the University of St. Catherine. She described the charity pie baker as “kind of quiet” and “really serious but also super fun.”

Pies go for a suggested donation of $20 each and can be reserved online. About 90 pies were still available Tuesday afternoon.

As for Christensen, she is resting up this week. “I have to tell you, I am very physically tired and sore… I feel like I ran a marathon, though I’ve never run a marathon,” she says.