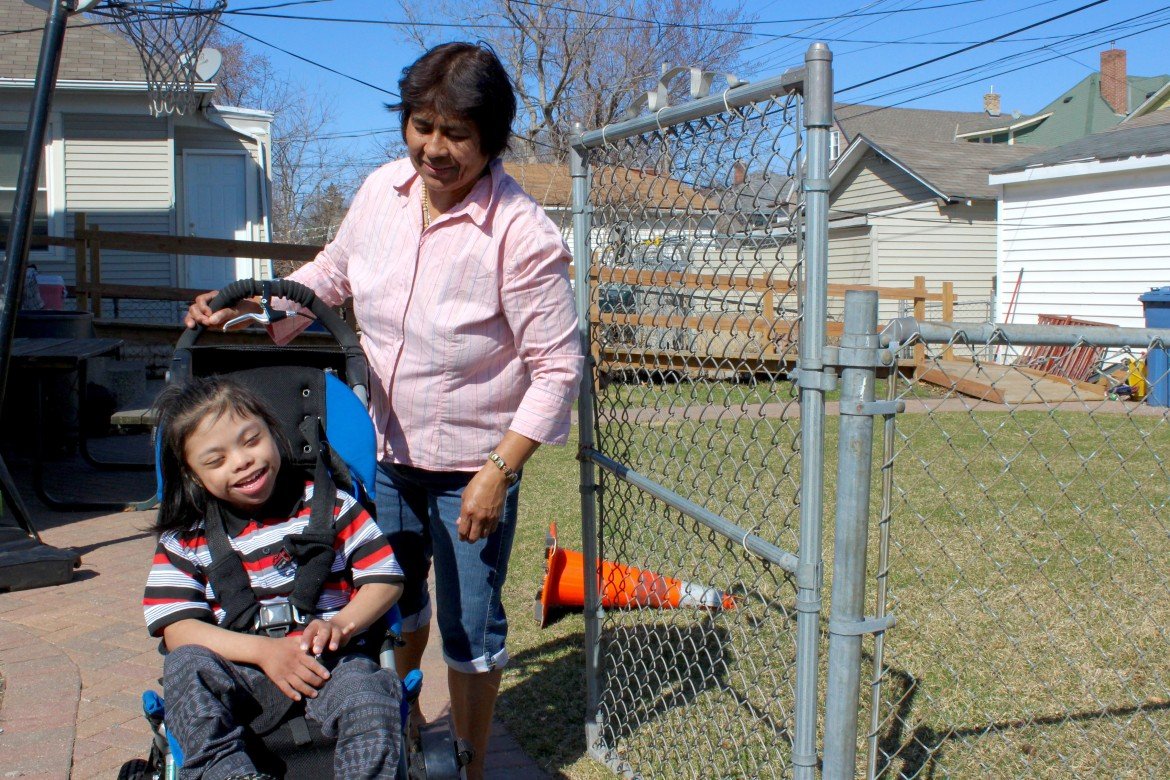 Rosa Pacheco and her 9-year-old nephew Emanuel enjoy the sun in their yard. An accessibility ramp built by the Central Neighborhood has made their lives much easier. Photo by Kayla Steinberg.

For years, Mike Hoyt, a Central Neighborhood resident and Pillsbury House and Theatre Creative Community Liaison, watched his neighbor Rosa Pacheco struggle to get her 9-year-old nephew Emanuel to school.

“While bringing my daughters to school, she would carry his wheelchair down the stairs and then go back up the stairs to carry him down too,” Hoyt said. “So I knocked at her door one day and asked her if she wanted me to get help because I thought I might be able to.”

From their discussion, multiple community members were brought in to help with the idea of making Emanuel’s transport from his home to his yard physically easier by building a ramp with the help of the Central Area Neighborhood Development Organization (CANDO).

However, individuals with disabilities may be denied reasonable accommodations “if it would impose an undue financial and administrative burden on the housing provider.” That one clause means that many tenants may not be able to receive accessible modifications for their housing, or homeowners may not be able to afford to pay for modifications that would make it easier to get around.

The staff and residents of the Central Neighborhood saw that disability access was a key concern in their neighborhood.

Henry Jimenez, the former executive director of CANDO, said, “Central Neighborhood and culture consist of a great mixture of people. Some who financially have more and some who have less. This includes young people and elderly people with housing accessibility needs.”

Realizing there were available funds in the Neighborhood Revitalization Program (NRP) from the city of Minneapolis, Jimenez discussed options with his staff and board members to bring personalized solutions to Central Neighborhood residents.

Jimenez said the Pachecos’ story motivated CANDO to find creative ways to use the NRP funds, so they developed the 2015 housing accessibility grant. It is a $1,000 grant that South Minneapolis residents may apply for to make accessibility modifications to their homes, such as ramps, bathroom improvements and more. The grant is awarded to renters and homeowners; however, renters need to get approval from the landlords before modifications may be done.

Last summer, Jimenez and CANDO gave the first $1,000 grant to the Pachecos to build a ramp to the yard.

Even though he loves to dance, Emanuel has trouble walking more than a few steps. Pacheco described how before the construction of the ramp, she and Emanuel struggled to get out of the house, which involved going down several steep steps. She always had the fear they could fall.

Pacheco said the ramp improved her and Emanuel’s lives immensely. When she spoke of the construction of the ramp, and Emanuel’s ability to enjoy his yard in addition to the ease of getting out of the house that came with this construction, you could see the elation on her face.

“What made the grant a success was not the funds only, but the community volunteers too,” said Jimenez. “CANDO was able to get volunteers by asking for help on our website, connect with other community leaders and captains such as Mike Hoyt, and share information with community contributors at a neighbor gathering called the Curbside Appeal Lottery” to get the word out and the ramp build.

Antoine Martinneau, now CANDO’s executive director, said, “keeping the program going is perfect, and now we want to do more [in 2016], so the housing accessibility grant is still available this year.”

Jimenez added, “Martinneau did a lot of knocking on doors for recruiting volunteers too.” He said, “CANDO only had a staff of three people last year, but the community rich with people willing to help made it [the Accessibility Grant 2015] a success.”

Pacheco said she has never lived in a community as supportive as the Central Neighborhood.

Similar to the maxim, “It takes a village to raise a child;” it takes a community to help a neighbor.

Anyone who would like to volunteer for future Housing Accessibility projects may contact CANDO at (612) 824-1333. Central Neighborhood residents interested in applying for the Accessibility Grant for 2016 can find the application here.

To read more about Emanuel’s story, check out an article written by Antoine Martinneau here.