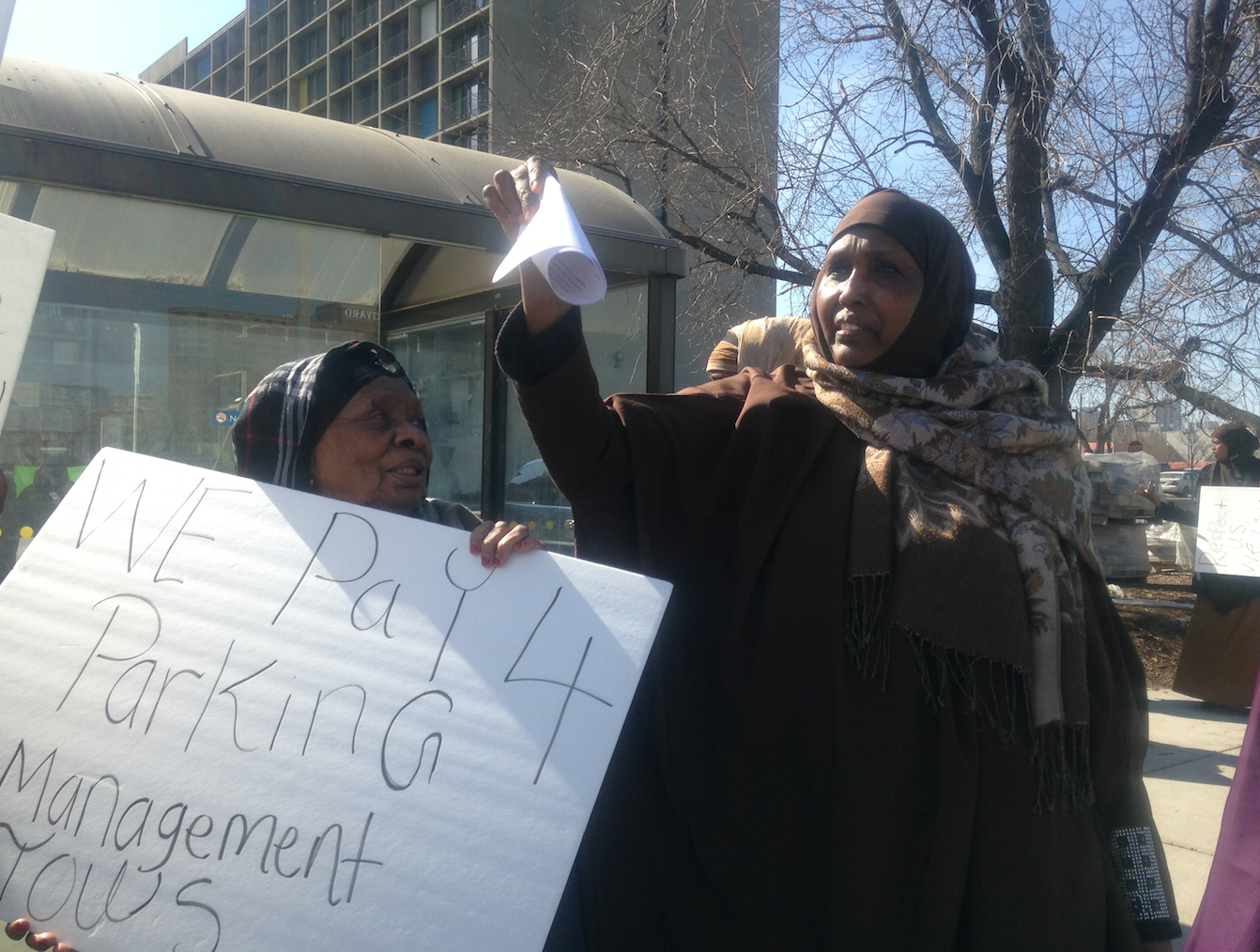 A group of residents at the Cedar Riverside Towers in Minneapolis’ West Bank neighborhood claim their cars have been ticketed and towed without a reason, have gone long periods of time without a working elevator and are treated with disrespect by Sherman Associates, the company that owns the property. These claims, say representatives and workers from the company are without merit and instead, countered that many making the complaints don’t actually live there.

On a recent Friday, more than fifty women stood outside of building A on the Riverside Towers campus holding signs saying, ‘Housing is a Basic Right,’ and ‘We Want Respect.’ Around 2pm, right after Friday prayers finished they began chanting calls for change in both English and Somali as cars passed by with honks and cheers of support.

Their complaints were broken elevators (one tenant said the elevator in her building had been broken for nearly three weeks), disrespect on the part of management and…parking. Nearly every woman I spoke with at this Friday protest complained about the lack of parking, the extra fees they pay for their space and the number of times they had been towed. One woman said that while unloading groceries, she came back to find her car gone.

A letter dated January 6thwritten by Mohamud Noor from the Confederation of Somali Community in Minnesota laid out the group’s complaints: discrimination based on race and religion, tenants vehicles being towed out of assigned spots, laundry machines not functioning properly, no parking for visitors, and tenants being charged for repairs.

At the end of the letter, Noor asked to have a meeting with management to resolve these issues. Noor said he was contacted by residents who had these concerns and wants to, “bridge the communication gap” between residents and the property management company.

“When people don’t talk to one another, you end up having problems,” said Noor when I asked about how residents came to this point of protesting in the street.

Valerie Doleman, director of marketing & communications from Sherman Associates, the company that owns Riverside Towers, sees the situation quite differently. Sherman Associates knew about the protests and said they met wit the Riverside Plaza Tenants Association earlier in the day to discuss the above mentioned issues. Another meeting is scheduled for this Friday, March 20th from 5-7pm to further address concerns. Doleman also countered Noor’s letter with frustration.

“The organizer of the protest doesn’t even live on the property,” she said when I spoke with her by phone to ask what she thought about resident complaints.

Doleman also believes that many residents at the protest were not actually residents. Doleman said she was informed by residents who chose not to attend and the Riverside Plaza Tenants Association that these protests were planned. As to how she knew the protests were attended by non-residents, Doleman offered no specifics.

A big complaint many of the women had was about respect. Speaking through an interpreter, Surer Abdulmajid said that whenever she went into the property management office to complain they said, “go, I don’t care.”

Doleman says that she and other staff members have a tight relationship with residents at Cedar Riverside Towers. She cited Sherman Associates track record of providing housing for diverse populations and the fact that they took over Riverside towers in 1988, when the vacancy rate was very high.

“The fact that it is now fully occupied and that there is a waiting list is a testament to our relationship building efforts across cultures.  Our management office is staffed by residents who are trained and qualified to navigate cultural differences and sensitivities,” Doleman said in an email statement. “They are amazing people. I’m moved by their spirit,” she said about the people who live in Riverside Towers.

Sherman Associates does provide bulletins and notices in seven different languages as well as providing a closed circuit channel to broadcast these notices in those languages. Sherman Associates says that Riverside Towers are an important part of their company and that complaints and other issues get discussed on a daily basis.

At press time, City of Minneapolis had not yet provided information about whether the property had received citations for broken elevators. The city does respond with an inspection when complaints are made to the city’s 311 hotline, which is made available in several languages, including Somali. Non-complaint inspections are also made to those buildings on a rotating basis.

The normally shy group of women had no reservations when I approached with my microphone and recorder.

“We don’t even care if it’s the camera. We have a big problems here,” said Surer Abdulmajid. She’s been living in Cedar Riverside Towers for 18 years and said the problems have increased once a new manager came on board. She complained that her car was towed multiple times. “We came here in 1993, and made this place safe, but now it’s like were in prison,” Abdulmajid said before she went back to protesting with the other mothers and women.

Sherman Associates says that each area requires a parking permit and has a fee associated with it and that these terms are agreed upon in the lease. There are six drop off zones for passenger pick up/drop off, with a fifteen minute limit at each. But still, residents like Bibi Abdulkadir say they have been ticketed and towed. She said she recently helped a friend taking her kids to the daycare. When she returned, she had been given a ticket.

Parking is tight on the West Bank as new businesses and students vie for spots along Cedar and Riverside. That makes it tough for residents, who pay an extra fee for parking. Even after paying the fee, some residents say, their cars were towed when they were dropping off their children, helping to care for elderly residents or just unloading groceries.

Residents say they want to continue living here, but some say they feel like they want to move. Sherman Associates says they are committed to listening to and solving these complaints. Mohamud Noor says that he has reached out to management and hopes to have a meeting between the two soon.

“These are the mothers. They are the women who run the household and they feel their concerns have not been heard,” said Noor.