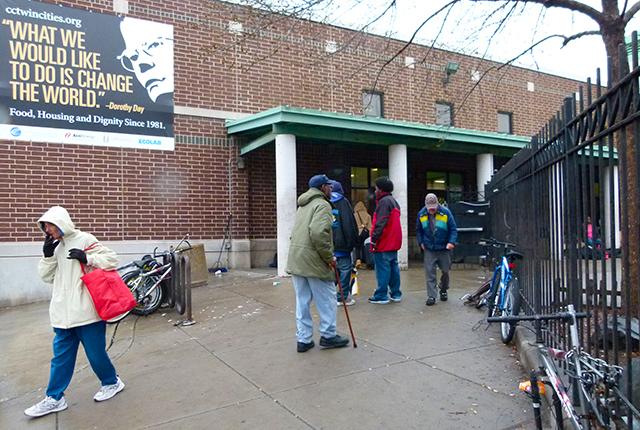 The current facility was opened in 1981 as a daytime drop-in center offering coffee and sweet rolls to homeless people. (MinnPost file photo by Jana Freiband)

A proposal to relocate the Dorothy Day Center to St. Paul’s East Side was abruptly pulled off the table this week because of neighborhood opposition.

The plan to move services for homeless and low-income persons from Dorothy Day’s location near the Xcel Energy Center to an East Gateway site was touted in December by a mayoral task force representing members of faith, business, government and nonprofit communities.

But by early March the Payne Phalen Planning Council was pleading for a site “that does not further concentrate poverty, and which is not already saturated with services for at-risk populations. ’’

Other East Siders argued that having Catholic Charities construct an emergency shelter, housing facility and service center near Railroad Island northeast of the junction of Interstates 35E and 94 would be a setback to their economic revitalization efforts.

Faced with the possibility that opposition would interfere with efforts to obtain bonding dollars from legislators this session and delay construction, St. Paul Mayor Chris Coleman announced that the new facility will be constructed on and around the current Old Sixth Street location.

Coleman and Catholic Charities of St. Paul and Minneapolis, which would build and operate the new Dorothy Day Center, call the need to provide services urgent.

The current facility was opened in 1981 as a daytime drop-in center offering coffee and sweet rolls to homeless people. The center now shelters 250 people a night sleeping on thin mats on the floor.

The first phase of the project is expected to cost $39 million. Planners hope to receive $18 million in state general obligation bonds from the Legislature and to apply for an additional $17 million in housing infrastructure bonds.

In light of the about-face on where to build, MinnPost talked to Tim Marx, CEO of Catholic Charities of St. Paul and Minneapolis. Here are edited excerpts of the interview:

MinnPost: Can you say more about the sudden decision to change locations?

Tim Marx: It is not unusual when you propose a project of some significance that it takes time to work through the community process so the community feels comfortable with what is going on. It is because of the urgency of the Dorothy Day Center and horrific conditions there that we are moving this process along….We were confident with some time we could resolve those concerns….It turned out in order to get the support at the Legislature that we need and to move forward immediately we needed to pivot…to advance this critical need for the community.

MP: Where does that leave things?

TM: That leaves us with the community united around the need to advance the Dorothy Day revision. We have a location the mayor and community are now rallying behind in and around our current site.

MP: What is the overall plan?

TM: Phase one is a combined dignified-emergency shelter with permanent housing right above it — the proposed St. Paul Higher Ground based on the successful Higher Ground in Minneapolis. That is 150 units of new housing and shelter capacity for 320. That is the first and most critical component of phase one. The second component [of phase one], which also was going to be located on the northeast quadrant of downtown and that will stay in or near the present location, is called the Connections Center, and would be a resource center.

MP: How much space do you have now? 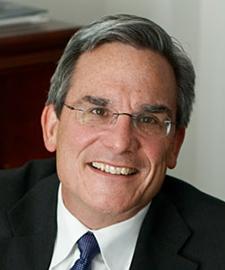 MP: What will this cost?

TM: The total project cost of phases one and two is estimated to be $63 million. What we’re focusing on right now includes Higher Ground St. Paul — combined housing and dignified shelter — and the Connections Center, which offers health care, housing and other important resources. The total cost of that is $39 million.

MP: Do you already have plans to build on your current site?

TM: When we began we looked at a number of options. One option was to stay at our current site. We did some preliminary work on that.

MP: When do you think you might be able to start construction?

TM: If we can get the state funding we need by the end of this year…and assemble the rest of the process, our hope is we can break ground by 2015. My real-estate professionals tell me that is very ambitious, but I think it is very important to be ambitious when you look at the dire situation at Dorothy Day. We have no time to waste.

MP: How would you describe that situation?

TM: Dorothy Day was never intended for people to sleep there. We’re increasingly concerned about our ability to meet the needs of a place that is [sheltering] people overnight. It is a building being worn out where 250 people are sleeping inches apart on thin mats with inadequate facilities, including increasingly infirm people. People are coming with more challenging conditions, including more elderly people. It is a facility that is overwhelmed.

MP: Can you provide some numbers?

TM: We have about 6,000 visitors to Dorothy Day each year and increasingly we find it difficult to accommodate them all. Not everybody who visits there sleeps there. About one-third sleep there. The other two-thirds get meals and services there. Beginning in 2011 we actually started turning people away. We see people increasingly elderly. They have difficult medical conditions and we’re unable to provide decent, safe and sanitary conditions.

MP: How will the homeless be sheltered during construction?

TM: What we’re hoping to do, and it is a challenge, is to stage the construction so there is no disruption of services.