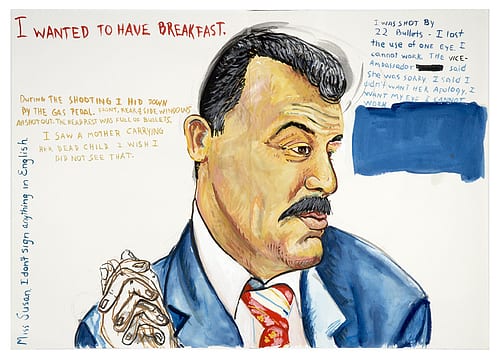 “I wanted to have breakfast.”

Although his hands are folded to his side, they appear in flux, as though he is wringing them.

“During the shooting I hid down by the gas pedal.  Front, rear & side windows all shot out.  The headrest was full of bullets.  I saw a mother carrying her dead child.  I wish I did not see that.

And then, almost as an afterthought:

This moment was captured by American artist Daniel Heyman in his watercolor and gouache piece, The Blackwater Incident (2007-8), in which Salman’s portrait is surrounded by his handwritten testimony hanging around his face.

Eight of Heyman’s portraits of Iraqis offering their first-person accounts of the Iraq war are currently featured along with works by five other artists in the Carleton College Art Gallery’s exhibit, War Work: Artists Engage Iraq and Other Wars.

To collect the material for his works, Heyman accompanied a human rights lawyer to Jordan and Turkey to talk with Iraqis who suffered injustices from U.S. private security contractors, most notoriously at Abu Ghraib Prison.  As he creates a portrait, he writes down their testimonies (in translation) as they are being told.

As Operation Iraqi Freedom winds down, the artists in War Work invite us to pause and reflect upon the impact on global citizens. The work of six artists are shown, each dealing with the experience and aftermath of war in a distinctive way.

A strange, clipped sound echoes through the gallery.  The source: gunfire, in former Marine Ehren Tool’s film 1.5 Second War Dead Memorial.  The screen is dominated by images of white ceramic cups bearing images of American eagles, a photograph of soldiers, or logos for different branches of the U.S. military. Each cup is pierced by a bullet, sometimes completely blown apart to reveal a blood-red interior.  The camera lingers just long enough for the hole to emerge like a wound.

“To acknowledge the death of one person who has died in war, watch this DVD for 1.5 seconds,” reads the plaque beside the screen.  The plaque lists casualties – American and otherwise – from American conflicts since World War II.

In the center of the main gallery, a series of prints shows a uniformed U.S. Army soldier from the Iraq War, slowing taking off his uniform until he is nearly naked.

A single line of text followed by short handwritten stories overlays each of the prints, with the story telling of an encounter of the soldier with an Iraqi civilian. The title of each of the prints is the same: “You are not my enemy.”

The series is part of the Combat Paper Project, which artist Drew Matott and Iraq War veteran Drew Cameron started to help soldiers deal with the psychological trauma of war.

War Work is free and open to the public at the Carleton Art Gallery.  The exhibition will be open until November 22.