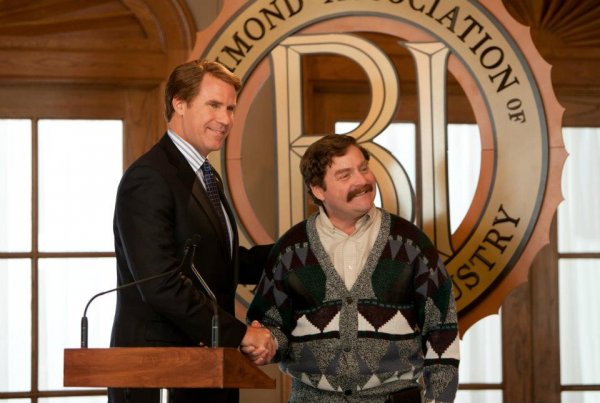 Sweaty handshakes, promises of tax cuts, and podium debates. Trash talking, a painful hunting accident, and ignorant slander. Yep, director Jay Roach’s latest comedy (following previous work behind the camera in 2010’s Dinner for Schmucks and the 2012 television movie Game Change) explores the world of politics and doesn’t shy away from showing its bad side, where it turns out, a lot of laughs can be had.

Democratic Congressman Cam Brady (Will Ferrell) is comfortable as a politician in North Carolina’s 14th District. He brings crowds to their feet by emphasizing the importance of “America, Jesus, and freedom.” He’s got a wife and two kids, an enormous house, and regular sexual affairs on the side. Mitch (Jason Sudeikis), a responsible and loyal campaign manager, is always by Cam’s side to offer advice.

Life is good. And it’s about to get better as Cam closes in on his fifth term with literally no opposition. But then a man with a Burt Reynolds mustache gone awry and a high-pitched voice steps in the way: Marty Huggins (Zach Galifianakis). Huggins applies at the last second to run as the Republican candidate for the 14th District, a move that infuriates Cam.

Huggins is not your average politician. He favors sweater vests over suits and a pair of trembling pugs over bandana-clad chocolate labs. Nonetheless, he’s in the race because of the financial interests of Glenn (John Lithgow) and Wade Motch (Dan Aykroyd), brothers and CEOs who want to make District 14 a land of factories and cheap labor. They need Huggins to beat Cam to gain power over the land. To make sure this happens, the Motch brothers hire Tim Wattley (Dylan McDermott), a stern and scary man who always seems to wear black, to be Huggins’s campaign manager.

To buy a ticket to The Campaign is to purchase a ringside seat for a boxing match between two comedy heavyweights. On one side of the ring is Ferrell, the eleven year Saturday Night Live veteran who’s known for playing ridiculous, raunchy characters who aren’t bashful about frolicking about in the nude or getting in shouting matches with other grown men. In the opposite corner is Galifianakis, a bizarre stand-up comedian who struck gold in 2009 when he surprised audiences with his portrayal of Alan, a uniquely complex Las Vegas partyer, in The Hangover.

Ferrell and Galifianakis share a lot of funny moments in The Campaign. They swap insults and laughs effortlessly, like a couple of old friends shooting the crap on a park bench. The scenes they share together drip with crude humor that makes you laugh and gasp at the same time. That’s what happens when these personalities collide. Ferrell does the same thing he’s been doing since Old School. He runs around slightly buzzed and greatly obnoxious, with enough energy to put a cheerleading captain to shame. Ferrell, as always, does his job well.

Galifianakis, on the other hand, shows he has more range than his co-star. Here’s a guy who doesn’t play the same character every single movie. For instance, he was strange and funny in The Hangover, somber and funny in Due Date, and depressed and weird in Operation: Endgame. In this film, Galifianakis is wildly eccentric and shamelessly flamboyant; his mannerisms are a stark contrast to the stern white-collar politics he finds himself immersed in. If not for Galifianakis, The Campaign could have easily been a forgettable comedy despite a solid performance from Ferrell.

The plot sure is forgettable at times. Roach and his writers Chris Henchy (of Eastbound & Down fame) and Shawn Harwell constructed the movie out of what seems like a bunch of SNL sketches. There are a lot of isolated situations—debates, family dinners, and meetings—involving the same key characters. This strategy works wonders when a segment is hilarious (Cam getting bit by a snake comes to mind), but becomes problematic when the laughs fade and the story slows down like a sleepy drunk driver pulling over for a cop. Henchy and Harwell write head-shaking vulgar dialogue well, and they have a sharp eye for what aspects of politics—empty promises, dancing around questions, finger pointing, religious and familial situations coming under fire—to poke fun at. However, Henchy and Harwell drag their feet on plot progression. Even more disappointing is their decision to turn the climactic third act into a stage for apologies and good morals—a move that doesn’t make sense after all the carnage the lead actors caused the rest of the movie.

On the plus side, McDermott is great fun as a dark campaign manager who always looks like he’s ready to kill somebody. He hangs out at the Huggins home, eating Cheerios and yelling at anyone who has the misfortune of walking into his vision. McDermott adds a dash of mystery and a full shot of venom to a goofy story, adding just enough doom and gloom to balance the cheerful antics of Galifianakis.

If you like Ferrell and Galifianakis’s previous work, then you’ll like The Campaign. Otherwise, it’s hit-and-miss comedy with more connections than whiffs.

The Campaign is rated R, has a runtime of 1 hour and 25 minutes, and was given a wide release in United States theaters on August 10, 2012.