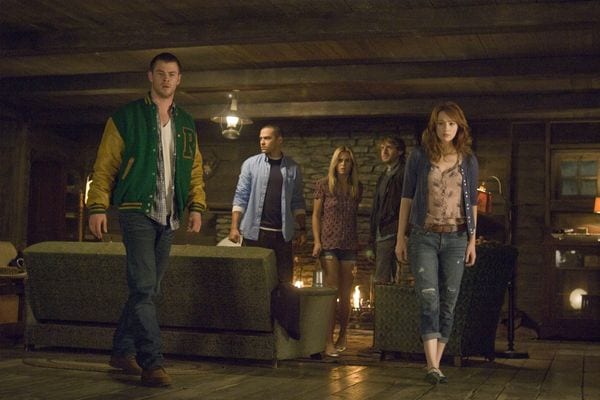 The five college students think they have an ideal situation on their hands. One of them has a cousin who bought a cabin in the mountains. Everyone clears their schedules for a weekend, piles into an RV, and heads out for what they think will be a relaxing break from doing things like studying Soviet economics. What they don’t know is they are about to take a test more dreadful than any offered in a lecture hall. Instead of using pencils to bubble in answers, these five friends will need to rely on their wit, sharp garden tools, and raw perseverance to pass the test—and keep their bodies intact.

After navigating winding roads on the brink of a bottomless gorge, the gang arrives at their destination and settles into the cabin. On the outside, the cabin looks eerily like the one in Eli Roth’s Cabin Fever (2002): the roof sags, the boards look damp and rotted, and the surrounding yard is strewn with dead leaves and Lord knows what else. On the inside, however, it’s actually kind of cozy, if you don’t mind a glaring wolf head hanging on the wall.

The vacation buddies at first seem like your stereotypical horror movie characters: Curt (Chris Hemsworth), the jock with big biceps; Jules (Anna Hutchison), the rambunctious woman whose hips swivel frequently in her daisy dukes; Dana (Kristen Connolly), a shy, sweet soul you would trust to feed your cat while you’re away; Holden (Jesse Williams), a man smart enough to read Latin like it’s text out of an Arthur book; and Marty (Fran Kranz), a cheerful stoner who’s disheartened with society.

As the sun goes down and the fireplace is stoked, Marty notices that something strange is in the air, and it’s not his reefer smoke. No stars can be seen. Curt is acting like an Alpha-male jerk. And Jules is extra…frisky. The thorough attention she gives the wolf head with her tongue bolsters Marty’s hypothesis.

The sense that something strange is going on gives way to utter confirmation: bloody, bone-snapping confirmation. Undead forces besiege the cabin, and that’s only the beginning of problems for the college students. They soon discover that the cabin they stand in is much more complex than its ramshackle appearance would suggest.

Being a huge fan of Joss Whedon going into the theater, I knew I was in for a treat. Whedon, who co-wrote and produced The Cabin in the Woods, is an established name in horror media (see Buffy the Vampire Slayer television series) and is unconventional with his characters and settings (see everything that goes on in the Firefly series). In this latest outing, Whedon, along with co-writer and director Drew Goddard, sets out to make a horror comedy that not only pays homage to the slasher movies of the 1980s and 1990s, but also cuts a hole into the genre with a satirical blade to see what kind of innards come spilling out. They succeed tremendously, despite the difficulty of working within a 95-minute time constraint (there is easily enough content here to keep a television show well-stocked for two seasons).

According to Whedon, he and Goddard rented a bungalow a few years ago. One guy took the upstairs floor, the other the bottom. For three days they wrote. The product of that write-a-thon was a script that manages to be clever, scary, and unpredictable. The opening scenes establish the five central characters as likeable, realistic people. Nowhere to be found are people you don’t care about: snobby characters with as much personality as dry lima beans. In The Cabin in the Woods, when a character meets a bloody end, you actually feel for them.

The cast helps the script achieve its high expectations in every way. A high-energy static surrounds all of the performances. Kranz is easily the most interesting character to watch, because he is one very funny dude. He packs a humongous bong that retracts into a fake coffee mug; he preaches on the misguidance of the human race; and he still finds time to read a picture book in a horror movie. Kranz is more than comic relief, though. He is a voice for the audience. When other characters are doing questionable things like messing with ancient, cursed literature or arguing that everyone should split up when the cabin is under attack, Kranz speaks up. And with his quirky personality, those moments are often the greatest.

This is a brilliant spin on a classic setting. I give The Cabin in the Woods a solid, bloody, funny, mind blowing 5 out of 5 stars, an A+.

The Cabin in the Woods is rated R, has a running time of 1 hour and 35 minutes, and was released to theaters in the United States on April 13, 2012.