Opponents of the Minnesota Marriage Amendment should check out the new Marriage Minute Video Series. It’s slick, and, unless you’re paying attention, you might miss the message.

“The Minnesota Marriage Minute videos are an exciting opportunity to promote a respectful dialogue about the future of marriage in Minnesota,” said John Helmberger, Chairman of Minnesota for Marriage.

So who is Minnesota for Marriage? The homepage says it’s “A broad coalition of leaders, both inter-faith and people outside the religious community, who support the Minnesota Marriage Amendment.”

Maybe. Inside the website you’ll see the broad coalition lists only three organizations:

And if you take a look at the photos you’ll see the visual cues that define the target audience.

Which is fine. Those of us who do want a civil dialogue should respect and encourage groups like this one and contribute in our own ways to an honest conversation. Equally important, we have to know their arguments and how to respond to them. 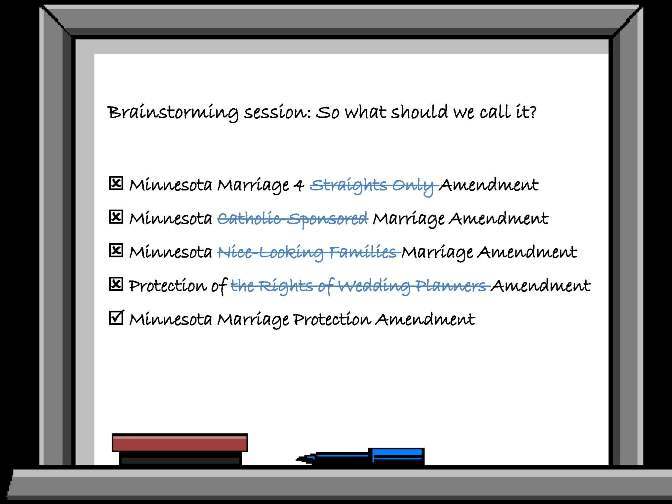 Footnote: The website refers to the Marriage Protection Amendment, in uppercase. Maybe I missed something, but I can’t find anything official showing that as the actual term for the Minnesota referendum. In any case, I checked to see what we’re protecting marriage from, and seven threatsare listed. It would behoove us all to have responses.

Still, while a civil libertarian, I’ll take a pass on Bullet 5. Someone else can focus on the rights of wedding professionals to marry only whom they wish.