The Journal of American Rocket Science has reported scores of British four-masted warships sailing westward in the Atlantic Ocean on course toward the United States. The Journal has uncovered secret British intelligence that reveals Britain has long harbored an opportunity to re-take the American Colonies after their humiliating surrender at Yorktown on October 19, 1871, to the Colonial military forces which ended the Revolutionary War.

The Journal’s findings indicate after the Yorktown surrender, Britain brought back its warship fleet to a secret harbor in the Thames River, mothballed the ships until the right time would occur to sail back and retake the colonies.

With the current Federal shutdown of the US government, including furloughing personnel of Coast Guard and military radar stations, the British government has decided the American political disarray provides the perfect time to reclaim what Britain says are their rightful lands. More to the point, the Republican Party’s current strategy to dismantle critical parts of American government gives the opportunity Britain has been waiting for the past 242 years.

In the last few days, commercial airliners crossing the Atlantic have reported the unusual sailing ship convoys crossing the ocean to the National Security Agency, but NSA documented this ship activity as practice sailing for the next America’s Cup. The Journal of American Rocket Science is now pondering whether the name of that race will change when competition resumes in 2017. 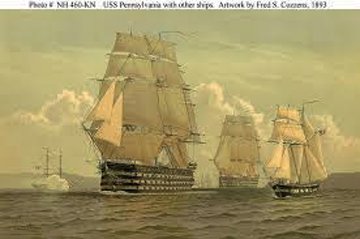