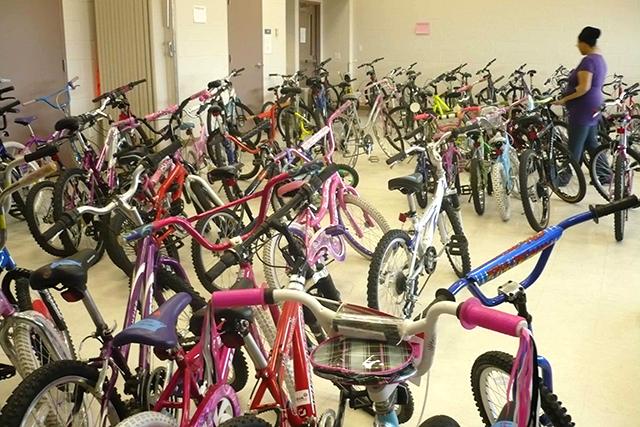 It took some coaxing to get 9-year-old Havy Nguyen out the door and onto the school bus Thursday. The excited youngster would much have preferred to go with her dad to pick up her shiny new two-wheeler.

Well, new to her anyway.

“I told her, ‘Go to school. I will pick it up,’’’says Havy’s dad, Tuong Nguyen, who’s been unemployed for a good while since he and other workers were laid off from their jobs at a local printing company. Mom is learning English and working part-time.

Yet there is way more than holiday generosity behind this bike give-away. It both helps head –off childhood obesity and represents a public-private partnership.

Folks at the St. Paul-Ramsey County Health Department wanted to get kids up on wheels exercising and using bikes for transportation.

Low-income people tend to have higher rates of diabetes and obesity, explains Ann Tranvik, a public health nurse with the department, because their diets are often large on high-calorie carbohydrates and low on healthy fruits and vegetables.

The rate of childhood obesity in the United States has more than tripled in the last 30 years, according to the Centers for Disease Control and Prevention.

People at Free Bikes 4 Kidz corral volunteers to repair and shine up bikes, then give them away.

Health department staff set their caps to helping change that trend, hooking up with non-profit Free Bikes 4 Kidz to provide the wheels and helmets, then pulling in grant money from the Statewide Health Improvement Program to pay for bike locks.

People at Free Bikes 4 Kidz corral volunteers to repair and shine up bikes, then give them away.

Buried under a mound of work in a flurry of final preparations for giving away 5,000 bikes this weekend, Kidz Executive Director Terry Esau of Orono had little time to talk but the group’s website trumpets this message:

“We’ll take your dusty, dirty bike and give it a new life. We welcome donations of kid’s and adult bikes, but find ourselves especially in need of smaller bikes, even tricycles.” They also welcome financial donations.

A friend approached Esau, an avid bicyclist, a few years ago asking if he knew anyone with a bike to give to a needy child and he went to members of his bicycle club. The organization mushroomed.

“It’s not complicated. It’s just fun. We just think every kid should have a bike,’’ Esau tells me, though admitting he’ll be ready to sleep for about three days straight once the holiday give-away is over.

In 2008 the group gave away 300 bikes, last year 5,000 bikes, all distributed through a network of 150 non-profits, churches, community organizations. About 3,000 volunteers have been involved this year beginning in October when 6,000 bikes were collected, stored and repaired in donated warehouse space. All are spoken for this season.

Bike parts are salvaged from about 1,000 of those bikes and new parts donated by Quality Bike Products of Bloomington. Allina Health is their lead sponsor, this year donating $75,000 to buy bike helmets and put on give-away events. 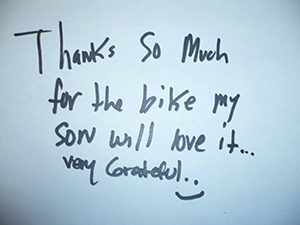 Right: A thank you note from one of the families

The bikes are most welcome, according to Alicia Huckleby, special projects coordinator for the Public Housing Agency in St. Paul. “We were so excited when they contacted us. There are not many ways our families have this opportunity,’’ she says.

As for that excited 9-year-old?

“My daughter is very happy. I would like to say thank you very much,’’ Nguyen says. He apologizes for his Vietnamese-accented English, but his gratitude comes across loud and clear.