** Changes on Minneapolis’ North Side ** 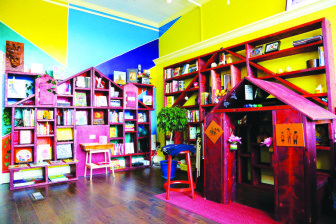 * The Minnesota Spokesman-Recorder has two cool pieces of Northside news. First is Dwight Hobbes’ literally colorful report on the opening of Ancestry Books, which he calls “an invaluable enterprise in a day and age of corporate juggernauts.”

Meet owners Chaun Webster [pictured at top] and Verna Wong, who view the new store as a “third-place” that will shift Twin Cities’ literary narratives.

* Second, they have a nice interview with Ishmael Israel [pictured at top], the long-time director of the Northside Residence Redevelopment Council (NRRC), who is leaving to take a similar job with the Umoja Community Development Corporation.

(He explains all about NRRC’s experience with CBAs, which is timely considering the debate over CBAs at the new Seward Friendship store in South Minneapolis.)

* Finally, streets.mn has a piece by former City Council candidate Kris Brogan on why the city’s proposed parking reforms will be good for the Northside. She argues that they’ll help developers provide affordable housing for the many people over North who don’t drive cars. 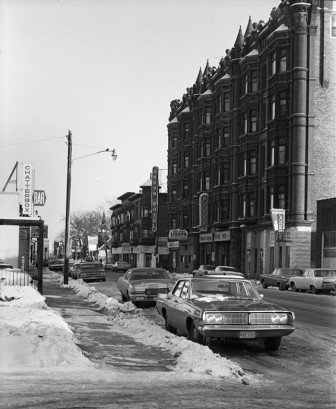 * First, Southside Pride ran an amazing essay about walking on Lake Street, along the north edge of the Powderhorn and Central neighborhoods. Gary Hoover describes the diversity of that part of town, and how he performed “four silent meditations” at Lake and 12th Avenue one particularly calm evening.

Then Hoover describes a conversation with a prostitute:

Check out the rest!

* For contrast, via Saint Paul Almanac, read this fascinating description of Saint Paul’s Selby and Western area in the 1970s [see photo above]:

This pimp had my best interests at heart. He told me about the Saint Paul American Indian Center, and that maybe I should go there and see if they could help me find another job.

Read the rest to learn about a swimming pool filled with naked body-painting hippies. (I’m not kidding.)

* In more serious street news, Melody Hoffmann’s take in streets.mn on how walking along Franklin Avenue is terrible for people with disabilities is a must-read.

Working-class and poor people get the worst pedestrian amenities even though they are the ones that use the sidewalks the most. These despicable conditions are at its worst in the poorest area of Franklin Avenue. It is no coincidence that these narrow sidewalks are on the edge of Phillips (the stereotypical “bad” neighborhood south of downtown).

After seeing her photos [at top of page], I think you’ll agree.

* Q: “Are school vouchers beneficial to Black families and students?”

* And speaking of lyrics, if you’re an old-school rap fan, you’ll want to read Insight News‘ report from a talk with Public Enemy’s Professor Griff. Griff recently spoke in Minneapolis about music and race relations in American today.

“I talk to our young brothers and sisters about how to survive the ‘killing fields’ – I call it the killing fields because they (police) want to kill you,” said Griff. “Act accordingly (if encountering police). ‘Yes sir’ his (butt) to death. That’s not being a punk, that’s being smart. You want to leave with your life.” 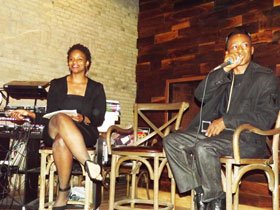