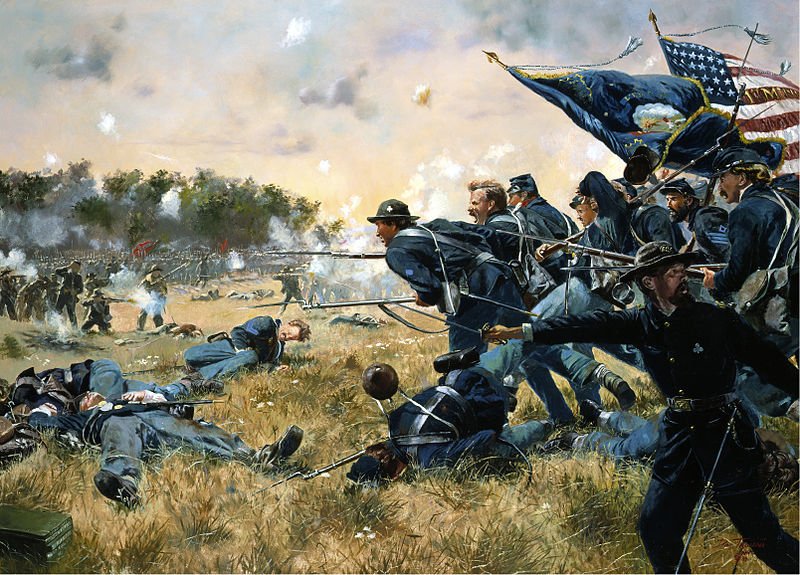 Dan Troiani's painting of the First Minnesota regiment at Gettysburg during the US Civil War.

The controversy around history curriculum and history textbooks in American high schools has become an intense battleground in the past few years for those who encourage an idealistic, homogeneous view of our nation’s past.

Recently released Texas textbooks assert that “slavery was an afterthought” as a cause to the Civil War and that “states’ rights were the real issues.” Political leaders in Oklahoma and around the nation challenged the revamped curriculum that the College Board set forth in 2014 for Advanced Placement US History (or APUSH) as “biased and inaccurate” in its portrayal of race and racism. Even now Presidential candidate and neurosurgeon Ben Carson asserted that the new framework would make students hate America and “want to sign up for ISIS.”

College Board officials and professional historians, however, have defended the APUSH revamp as “better reflecting the ‘complex, unsettling, provocative and compelling’ truth of US History.” Texas school teacher Samantha Manchac is planning to encourage her students to “be critical of the textbooks and not take this as the be-all and end-all of American history.”

That’s it, right? The battle lines are drawn: it is the typical liberal versus conservative battle that has played out on our national political scene for decades to such detrimental results.

The battle is between people who believe that showing the warts, blemishes, and horrific tragedies of American History diminish its place on the world stage, and those who view these past events as an essential learning tool for moving forward. Young people in the United States are growing up in a time of vast insecurity. This is partially due to global events but also due to the encouragement of the news media. History courses such as APUSH, therefore, play a critical role in the formation of their national identity.

By laying all of the facts on the table, history teachers encourage students to make their own assumptions of our nation’s past. Sure, these students will come to some of the same conclusions that are commonly accepted historical “facts:” for example, that the United States’ entering into the Vietnam War was a tragic mistake based on the shady Gulf of Tonkin incident, the Boston Massacre of 1770 inflamed already on-edge colonists to whip up tenuous Americans, and the Trail of Tears was a horrific tragedy that evacuated and killed thousands of Cherokee Indians from the Southeast United States.

But, critically, these students will also be able to view the history of our nation with new eyes, perspectives and insights about how we arrived at this point in our national narrative. By framing the issue as if America needed to be white-washed to be great, opponents of full and open historical records diminish what America could inherently be. George Santayana’s old adage, “those who cannot remember the past are condemned to repeat it,” applies just as well now as it did at the turn of the 20th century when it was written.

If America’s students do not learn about the past’s discrimination on the basis of race, creed, gender, political persuasion, sexual orientation and all of the other identities we hold near and dear, I fear we are doomed to repeat the mistakes of our past.