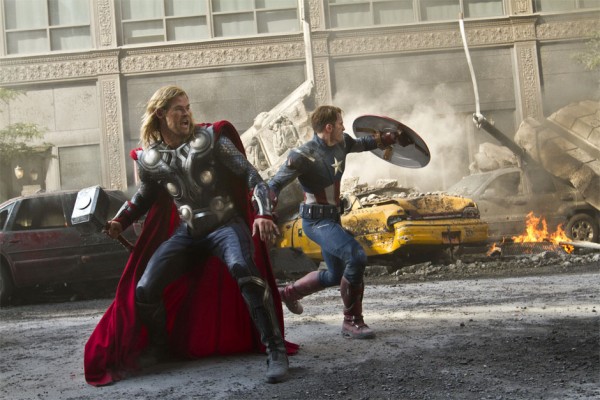 Four years ago, in the summer before my senior year of high school, I was sitting at my kitchen table with my friend and fellow reviewer Zach, tapping away at the computer, when we stumbled across the nugget of information that seemed more valuable than any tangible object: they were going to make an Avengers movie. At the time, we did not know that the “they” would be Joss Whedon, the brilliant mind behind Buffy the Vampire Slayer and Firefly and so much more. Nevertheless, we were still bubbling with excitement like a couple of fanboys who had stumbled into a forbidden section of comic book heaven.

Our giddiness did not disappear over the next four years. The anticipation to The Avengers 2012 release date would recede to the back of our brains from time to time, but that palm-sweaty excitement would return in full force when a new Marvel superhero movie would hit theaters, from Iron Man 2 to Captain America. After the end credits of each Marvel movie rolled, a clip—clocking in at about 30 seconds apiece—would play, in which characters from the upcoming Avengers movie would interact and give a sneak peek of what was to come. These clips fueled our desire for a fantastic Avengers film, and our expectations grew to skyscraper level height. When May 4, 2012, finally arrived, Mr. Whedon sated the entertainment appetites of the Tuesday Movie Men with flair and finesse.

Agent Nick Fury (Samuel L. Jackson), the director of S.H.I.E.L.D. (Strategic Homeland Intervention, Enforcement and Logistics Division) has a big problem to deal with. His organization was in possession of the Tesseract: a fist-sized cube that wields the powers of ancient Gods and could provide enough energy to keep Earth powered up forever if it was utilized in the right manner. An object with that much potential, however, is prone to have a target on its back. Loki (Tom Hiddleston), a devious demigod of Asgard who appeared as the main antagonist in 2011’s Thor, returns from his disappearance in a space wormhole to steal the Tesseract.

Loki’s not acting alone, either. He’s got the backing of the Chitauri, a race of war-loving aliens who want to use the Tesseract’s infinite powers to subject Earth’s citizens to skin-sizzling explosions and a lifetime of indentured servitude. With the disturbing thought of spaceships floating over Manhattan dancing in his head, Fury decides that it is time to unleash a secret weapon: the Avengers initiative.

The Avengers consist of a cast of superheroes from previous Marvel movies, based on the comic book series of the same name that first hit shelves in 1963 thanks to co-creators Stan Lee and Jack Kirby. With the help of Agent Phil Coulson (Clark Gregg) and Black Widow (Scarlett Johansson), Fury recruits a motley crew of outcasts to save the world. These desired world-savers include Iron Man (Robert Downey Jr.), Captain America (Chris Evans), Thor (Chris Hemsworth), The Hulk (Mark Ruffalo), and Hawkeye (Jeremy Renner).

Having this many big names (both in a real-world Hollywood sense and a comic book lore sense) in one movie can be both a blessing and a curse. On one hand, it’s prone to make the movie studio’s (in this instance Walt Disney Pictures) marketing team salivate over all of the star-powered propaganda they can churn out. On the other hand, the task of giving each star enough lines and screen time to flex their superpowers and quirky personalities is daunting enough to make a screenwriter flirt with insomnia.

Whedon, who directed The Avengers and re-wrote the first draft of the script by Zak Penn (the screenwriter for past Marvel projects Elektra, X-Men: The Last Stand, and The Incredible Hulk), takes special care to avoid leaving any leading man or woman out of the loop. Whedon’s experience in handling a large cast of interesting characters on Buffy the Vampire Slayer, Angel, and Firefly is evident here. All characters in The Avengers, from Iron Man to Agent Coulson, are provided with slam-dunk dialogue, ranging from humorous observations (Whedon’s shout-out to the 1981 arcade game Galaga had me lurching out of my seat with hysteric giggles) to stone-cold criticism of other characters.

Whedon’s and Penn’s screenplay moves at the speed of a comic book. Fast-paced, body-smashing action scenes that don’t give you time to come up for air give way to slower-paced discussions that build character development and the audience’s emotional attachment to the heroes and agents. The dialogue has fireworks of its own. Witty comments dripping with both sarcasm and seriousness are exchanged between the Avengers. Watching these arguments, I felt like I was eavesdropping on a juicy gossip circle from an addicting television drama about high school students butting heads.

The action is satisfying. Small-scale gunshot exchanges and fisticuff clashes are flawlessly weaved in the film’s first two hours before an all-out alien invasion through a portal above Manhattan takes over the hold-onto-your-seat-or-else climax duties. The battle between the Avengers and the Chitauri is a more coherent, easy-to-follow version of the Autobots versus Decepticons smack downs of Michael Bay’s Transformers trilogy. I was pleased that the camera did not get the shakes from adrenaline overdose. You can see each arrow strike and fist smash with remarkable clarity for a battle that zooms along as fast as the spaceships in which the Chitauri fly.

I will admit that I’m getting tired of the climax setup that The Avengers used: major American city under siege from mechanized aliens. Whedon and the cast pull off a good action-packed conclusion to the movie, but there are no surprises to be had. Iron Man swerves around skyscrapers, said skyscrapers crumble from explosions, the concrete streets rupture, humans flee in slow motion, etc. I expected a little more variety from Whedon, but hey, he has to please the money-hungry movie executives.

The combination of self-aware humor, classic big-budget action, and familiar Marvel faces makes The Avengers a tasty treat for your eyes and brain, even if you aren’t as avid a comic book fan as Kevin Smith or Jason Mewes. Whedon stated that if Avengers 2 does happen years from now, he’d like to make it a more intimate, smaller, personal movie. I think that’s the right way to go, because although this action epic deserves to be watched, doing more of the same in the future cinematic Marvel universe could be as detrimental to the franchise as Doctor Doom is to the Fantastic Four.