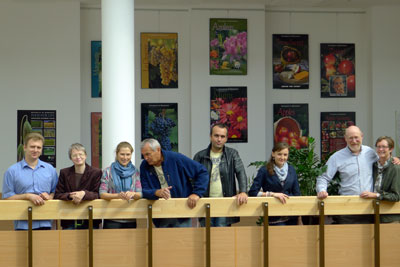 Dave Hansen and his wife, Karen Lilley, pose with the crew that set up the exhibit at Warsaw University of Life Sciences

Can science be art? That’s the question academics at Warsaw University of Life Sciences in Poland are asking in an exhibition of photographs by University of Minnesota photographer David L. Hansen.

The exhibit of poster-size images—called “Can Science Be Art? Images of U.S. Land Grant Discovery”—documents research done by the University of Minnesota’s Agriculture Experiment Station, which was founded in 1885. Hansen has been around for 38 of those years, photographing the university’s work.

The photographs display discoveries of Minnesota researchers in the areas of horticulture, plant pathology, forestry, crops (such as the U’s Honeycrisp apples, shown on page 1), livestock, soils and other subjects related to agriculture, natural resources and rural life.

The exhibit honors the 150th anniversary of the Morrill Act of 1862, which established the Land Grant university system in the United States. Warsaw University invited Hansen to show images that document the U’s research and its impact on life in America and around the world.

Hansen (left), a resident of St. Anthony Park, was able to attend the opening reception on Sept. 10. The exhibit was displayed through Sept. 22. It is now on display at the national Forest Research Institute outside of Warsaw. In November, it will open at the Polish Academy of Sciences in Poznan.