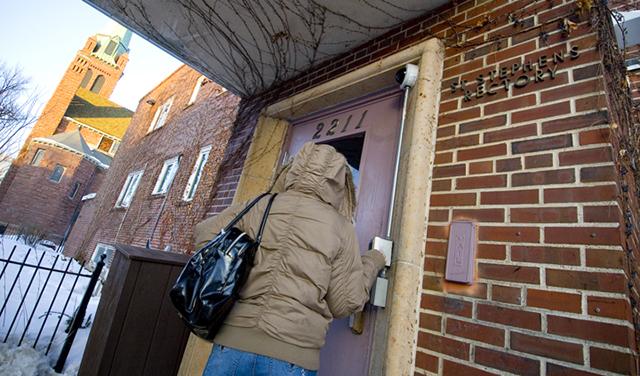 Mikkel Beckmen, executive director of St. Stephen's Human Services: "[Homelessness is] sort of like a swell of waves through the seasons, but the swells keep getting bigger each passing quarter." (MinnPost photo by Bill Kelley)

More homeless people — particularly families — are knocking on the doors of emergency shelters in Minneapolis and elsewhere this fall than last.

A continuing shortage of affordable housing tied to mortgage foreclosures and the North Minneapolis tornado is squeezing low-income persons onto the streets and into shelters, advocates for the homeless say. The Minneapolis vacancy rate for low-income housing is around 1 percent and the Hennepin County rate only somewhat better.

Joblessness, a fallout of the Great Recession, remains a problem. And families and individuals who have spent down savings and other assets and have worn out couch-hopping welcomes with relatives and friends have no where left to turn but to shelters.

On Monday night alone, for example, more than 1,600 men, women and children were housed in shelters run by the six organizations that contract with Hennepin County to provide for the homeless.

“We’re pretty close to crisis mode right now, and I’m not a person who tends to hyperbole,’’ says Daniel Gumnit, executive director at People Serving People, a family shelter in the shadow of the Metrodome.

“Last year we had an average of 350 a night. [Recently] we had a record-breaking 416. You literally now see a sea of toddlers. We have never, ever, seen so many homeless families,’’ Gumnit says.

“We could empty this building right now, refill it from our waiting list and we would still have a waiting list,’’ says Marti Maltby, housing director for House of Charity, Minneapolis, which provides group, transitional and supportive permanent housing for single adults. People move out of shelters and into House of Charity when space is available.

But more concerning, officials say, is the greater number of homeless families this month alone compared to last October.

Hennepin County officials said last week that on Oct. 11 there were 276 families in shelters with county contracts, which figured at 39 percent more than on the same day in 2011. Those higher, year-to-year numbers continued through the weekend. (The growth in single adults looking for housing is significantly smaller.)

“Normally we peak out towards the end of September for families,’’ says Gail Anderson, who’s worked with families receiving public assistance for more than 20 years and is now a supervisor of the county’s shelter team. Usually the numbers are down beginning in October because families are being moved into rental housing.

Not this year. “[Homelessness is] sort of like a swell of waves through the seasons, but the swells keep getting bigger each passing quarter. They don’t go down as much as they have in the past,’’ explains Mikkel Beckmen, executive director of St. Stephen’s Human Services in Minneapolis.

“You can’t separate homelessness from the economic position people are in,’’ he says.

Because of the tight rental market, “People who have more means end up in lower quality apartments because that’s all that’s available. That shoots the people who could previously afford those apartments right out of the bottom of the market,’’ Beckmen says.

Before the economy turned bad, says Anderson, ‘it was easy for clients to find entry level jobs.” They could go to McDonald’s or Taco Bell, even part time, and that little more income on top of government subsidies made getting into the rental market reachable she says.

But the housing squeeze allows landlords to be “a lot more choosy,’’ weeding out people with “rental history not as good as some others,’’ she says. “Years ago we could put most anyone in housing if they had the income.’’ Landlords don’t renew leases if tenants are a challenge in any way, Anderson says.

Other metro counties are experiencing similar problems, Anderson discovered after calling around.

Other indications of the situation:

Shelter stays are longer too, Anderson says. Formed in 2000 to move people quickly from emergency accommodations to rental apartments, the county shelter team in 2003 had average length of shelter stay at 26.9 days, but in 2011 stays ballooned to 39.2 days.

The county’s homeless numbers do not include all the homeless in Hennepin County, but only the facilities the county contracts with to provide a bed or a bed and meals. It leaves out many smaller; privately run shelters and also does not include shelter sites with homeless teenagers. Shelter rates paid for by the county run between $90 and $100 a night for a household of three.

“We have a surplus of people but not enough units affordable to the income levels people have,’’ he says, going so far as to suggest things could get so bad that the homeless could be pitching tents for shelter in Minneapolis.

“We should plan for and have a [community] conversation,” he says. “We can deal with this. We just need the political will and the strategy.’’