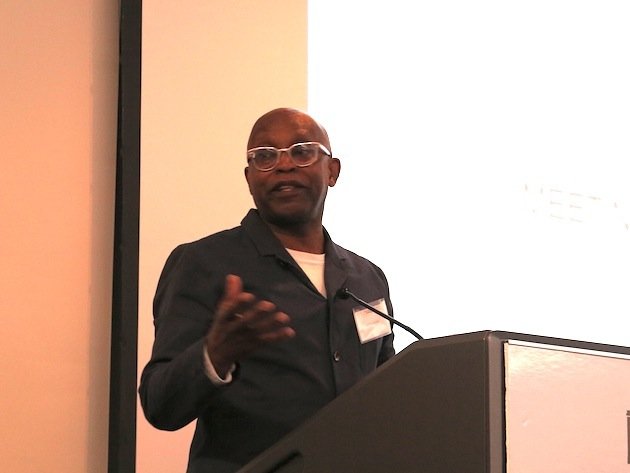 After five years of getting ready, the Central Corridor Funders Collaborative says yes: we’re ready and the Green Line is (finally) almost here. Business, jobs, housing, transit access and investment were all up for discussion April 23 as the Collaborative presented the 2014 Central Corridor Tracker Report at its fifth annual stakeholder event at St. Paul’s Union Depot.

St. Paul Mayor Chris Coleman said the Green Line represents a fundamental transformation. “I realize that it didn’t happen by accident. There were lots of times, moments, we could say, it’s too difficult, too challenging, too many questions and the time is not right, or we are not sure about what’s going to happen to businesses and residents along the corridor… But one thing that captured me in this process was they (Funders Collaborative) gave me the confidence to say we are gonna get this project done and we are gonna get this done right.”

Researcher Jane Tigan from Wilder Research discussed a set of indicators from the Tracker Report. Mainly, there are four highlights in 2014’s report.

1. Milestones have been met. For example, goals for the share of contracts paid to disadvantaged businesses and share of hours worked by both minority and female workers have been met.

2. Residential development and density are up. For example, corridor population has grown since the Baseline report published in 2011, with statistically significant increases in African American and Asian populations.

3. There are no signs of broad displacement, though housing rental cost is increasing. For homeowners, their tax assessments are not going up. For small businesses, over 100 businesses have closed or relocated.

4. Effective coordination and collaboration. 80 percent of stakeholders report that they are well informed and strongly agree on sharing the common goals.

Rassoui Dastmozd, from St. Paul College, said that he views the Central Corridor as a great opportunity for students. “At our school, we have roughly 58 percent-60.5 percent diversity in our students.… When you look at the Twin Cities area in the next few years or decades, we have to provide a talented pool of work force … so they have livable wages and will be able to move to middle class.”

On the one hand, St. Paul College has been working with employers to promote the students being employed. On the other hand, many organizations like the Knight Foundation have provided fellowships to help with students from low-income families or first generation going to higher education. The Green Line brings a convenient commute to workplaces.

Beth Pfeiffer, the director of the Cornerstone Group, said that investing in Prospect Park is “beyond creating buildings. A community is building up art, food, nature and a healthy living… So we look for partners who share the same philosophy — transforming the ordinary spaces … around us to an extraordinary place that inspires us.” Later, she explained how they planned building communities in the Prospect Park area.

Seitu Jones, as a representative of artists, talked about how car culture shaped his generation’s beliefs. “Being able to move from one city to another through the freeway…(and that lifestyle) makes us believe how smart we were,” he said. “A freeway to me meant progress… You all have heard the stories of how Interstate 94 has devastated St. Paul’s African American community… So I am here today, with all the shadows that came before, to raise the questions [for] people of color, poor folks, [who] have been displaced, or re-segregated.” Since 2007, people have been talking about the use of land, housing commerce, circulation, and also art. Now, Jones concluded, “Seven years later, many projects from St. Paul Public Arts have been implemented.”

This video by the Central Corridor Funders Collaborative features diverse voices from organizations working along the Green Line.

CORRECTION 4/28: Thanks to Jane Tigan for clarifying the wording of the Wilder report.