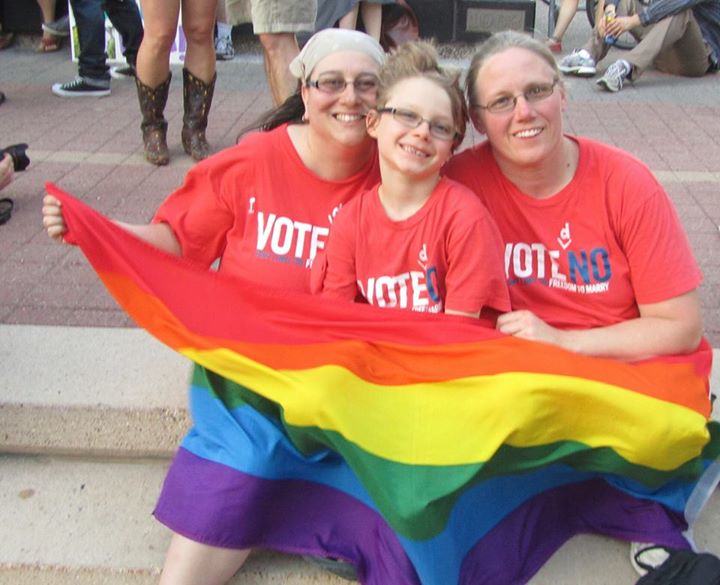 It’s a year today since we voted on the anti-marriage amendment. This time last year we were at a stopping point in a long, difficult, involuntary journey. It was a nervous 18 months, leading up to a horribly scary day.

For months and month, I had been imagining what life would be like on the morning of November 7th. I visualized going into my son, Ian’s room and telling him the news – both ways, with good news and bad, and envisioned what that morning might be like for him. Coping with the anti-marriage amendment as an adult had been incredibly challenging, but guiding my child through the experience had been just heartbreaking.

Ian’s loss of innocence at the hands of those pushing for this amendment quite simply broke my mama heart. He will never again have a childhood free from an 18-month campaign against his family. He will never again be blissfully unaware of what it is like to drive on the highway without seeing signs saying he and his parents don’t count and should be “defined” away. We kept some of the worse rhetoric out of his ears, thank G-d, and he never heard the things being said on TV. We knew that “win” or lose, the cost for our son could be enormous, and we feared that had no power to erase that.

The amendment campaign began when he was 6, and I remember my wife, Tina, and I briefly discussed whether we could protect him from the knowledge of what was happening. We knew immediately, however, that we could not. Ian had long been fascinated by current events and politics and also was intensely social and engaged in conversations about a range of topics with people of all ages. With a long campaign ahead of us, it would come up at school and synagogue, among neighbors and friends. And with something this hard, we wanted the chance to talk to him about it first, letting him process it at home, with just his parents, before he was faced with it anywhere else. So, we decided to carefully explain it to him.

He listened carefully to that first explanation and had one question,“So if it passes will the government make you get divorced?”

We reassured him that the amendment and indeed the government could not do that, and thus began a long journey of helping our child cope with this new reality. It was a lot to grasp for a child with two mothers, a child who blessedly had not encountered much homophobia.

My very wise wife pointed out to me later that same night that bad experiences could bring good lessons, as when we had a break-in at our house. Now, my wife Tina and I are optimists. I think it’s fair to say our cups are almost always half full and more often than not they do runneth over. Still, our son Ian’s reaction to the break in blew us away. As we stood in shock amid the mud and glass that was everywhere, our belongings strewn about our home, Ian was positively jubilant.

“Look!” he said, “We still have our beautiful Shabbat candlesticks! We are so lucky! Look! Look! They didn’t take our Shofar! We are so lucky!” He went into each room and jumped excitedly, expressing gratitude for things the burglars left behind.

Lucky wasn’t what Tina and I felt in that moment. We would have gotten there eventually I do believe, but Ian pulled us to count our blessings immediately, even as we stood in wreckage.

So, my greatest fear was that this anti-marriage campaign would cause Ian to lose these qualities of empathy, optimism and the basic belief in the goodness of people. Making sure that like the break-in, the amendment, while a negative experience, would bring powerfully positive lessons became our mission. We were determined that WE would decide how Ian processed this experience; that WE could help him process it in a way that helped build empathy; that the belief he had in the goodness of people would survive. So we set forth,looking for ways for Ian take away something positive at each turn.

Ian talked passionately about the subject and we wanted him to learn the power of his voice. He dictated letters, first to Senator Limmer who introduced the amendment and then to all the people of Minnesota, explaining why they should vote no. We hoped he would learned the power of speaking out.

Ian frequently struggled with “WHY?” Disapproving of someone else’s family was and is foreign to him. We tried to convey compassion for those who are scared of differences and upset by the reality that not everyone is the same. We hoped he would learn empathy.

We pointed out all those who were standing up for Minnesota families. We shared the passionate words of elected officials and stories of all the people working to defeat the amendment. We read him the growing list of local businesses, organizations and religious institutions standing with us, as well as the Minnesota Rabbinical Association’s statement. We hope he would learn gratitude.

We felt a need to manage Ian’s expectations as he often came back to a firm belief that everyone will vote no, saying “The Constitution isn’t about being mean to families!” His confidence in the voters was at once heart-warming and concerning. After all, we knew the election would be close. We tried to help him hope –and work – for the best, but also prepare for the worst.

And then there it was, the night of the election. Tina and I tucked Ian into bed, not knowing what he would awake to find. Many hour slater, I was frantically refreshing to Secretary of State page, and watching the precincts counted going up and the “Yes” votes going down. People on Facebook started giving up and going to bed and Kare 11 closed up shop. Everyone seemed to think we wouldn’t know that night, but I shook my head and said we would. I said that the numbers kept moving and that I was sure we were going to know.

Around 1:30 it came across Facebook that an announcement was coming.And then there it was – we had WON! Tina and I leapt up and started cheering and crying and kissing and hugging. We were just overcome – and not quiet. And our house is small so Ian must have heard us. I said “We have to wake him up!” and a little voice from down the hall said “Wake who up?”

We RAN to him and I said, “We WON! We won EVERYTHING!” and he jumped out of bed into our arms and we all cheered together! He was SO excited and we told him about both amendments, and the St. Paul school levy and Obama. And he said “Amy?” and I said, “Yes! Her too! Hours ago!” And at 2:00 in the morning we sat and had ice cream and talked about our relief and joy.

Though he must have been tired, he could not wait to get to school the next day and there were many hugs and high fives and cheers on his way to class. The children were literally jumping for joy down the hall and the relief was palpable.

There was this crazy thing where grown-ups were behaving badly, but MORE of the grown-ups did the right thing, and I hope and pray THAT is what Ian carries forward. Shortly after that day, when deciding what to wear, Ian chose a shirt he’d had for a while that says,“My family counts.”

So how do I feel a year later? Nothing can erase what we went through. But, look at all we have left. We are so lucky.