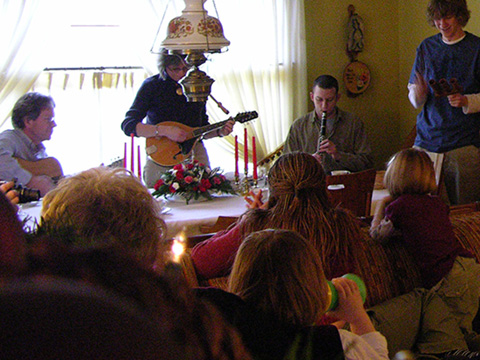 Henry is the babe in arms in the photo above, taken at my nephew Andrew Wilfahrt’s funeral. Henry is the son of one of Andrew’s cousins I have occasionally appropriated images of him over the last 19 months for my Monday newsletter. Upon editing, cropping, and enhancing, I suddenly realized that Henry was the child in this image. That is a bit on the spooky side.

I live without a vehicle and my older brother “drew the short straw” and provided the chauffeur service on both Friday and Saturday. Paul is a model railroad enthusiast. He is also Henry’s grandfather. So Paul, James (“Jim” – Henry’s father), Henry, and I attended a Model Railroad show on Saturday morning, before the graveyard service. The show is another story. The story here is that Henry is a stand-in for all the other 19 month people in the world. Andrew was attempting to make a better world for those people. Henry is a Canadian citizen. That would not make any difference to Andrew, nor if the child is female, or an African, or Russian, or an Afghanistan, or any nationality. Andrew would be well aware that as those children grew, they would develop their sexuality with their maturing. No child is born homophobic. They love without conditions. A person’s sexuality is individual and personal, and none is wrong. Also a person’s sexuality is only a part of that person, not an all defining character trait. So Andrew would have all children grow in a loving environment that does not teach hate of any other’s personal characteristics, nationality, or ethnicity. Peace in not some entity to obtain, Peace is a Practice. Teach your children well.

You who are on the road
Must have a code that you can live by
And so become yourself
Because the past is just a good bye.

Teach your children well,
Their father’s hell did slowly go by,
And feed them on your dreams
The one they picked, the one you’ll know by.

Don’t you ever ask them why, if they told you, you would cry,
So just look at them and sigh and know they love you.

And you, of tender years,
Can’t know the fears that your elders grew by,
And so please help them with your youth,
They seek the truth before they can die.

Counter Melody To Above Verse:

Can you hear and do you care and
Cant you see we must be free to
Teach your children what you believe in.
Make a world that we can live in.

Teach your parents well,
Their children’s hell will slowly go by,
And feed them on your dreams
The one they picked, the one you’ll know by.

Don’t you ever ask them why, if they told you, you would cry,
So just look at them and sigh and know they love you.