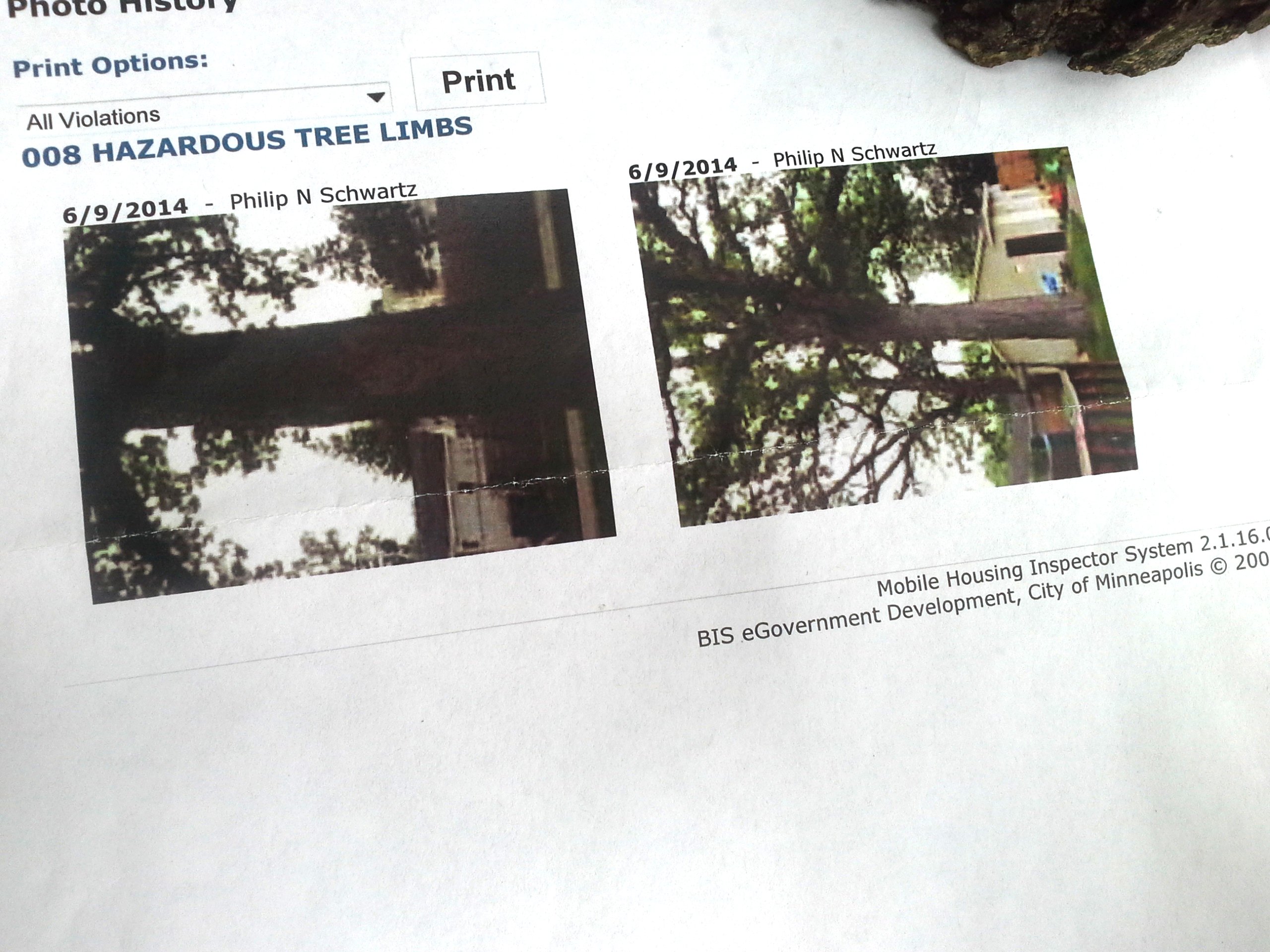 Is it ok for a city worker to enter your fence without permission, stroll around your backyard and snap photos from your deck?

It violates quite a lot, in fact.

And I definitely feel violated by the City of Minneapolis.

Entering another person’s property without permission is trespassing. Plain and simple. Whether or not you’re a city employee or a thief snooping around before a break-in.

A few days ago, I got a letter in the mail from the Minneapolis Housing Inspection Services Division. It informed me that an inspector had been to my property to look at the large Bur oak in the backyard. I was instructed to remove all the dead branches from the tree canopy by July 16, 2014.

There are some interesting things missing from this letter. First and foremost, there is no name. You can receive a letter from a city without a name attached? I was pretty surprised too.

There was also no contact information. No phone number. No email address. There’s no way provided in this letter for me to get in touch with the person who wrote the letter. Pretty unbelievable, huh?

Perhaps this sentence at the end of the letter explains why: “Housing does not typically grant extensions for nuisance violations.” In other words, we aren’t signing our name, or giving you a telephone number because we don’t want you to call because we won’t change our minds or do anything different.

What’s also striking about this letter is that there are two photographs included with it. It’s when I looked at those photographs that my blood ran cold and I was completely creeped out. One photo was taken from my deck, and the photographer stood right next to my glass patio door. The other was take from the middle of my backyard.

Yes. Seriously. This inspector, whoever he was, opened up my fence gate and let himself into my yard, wandered around, hung out on my deck, and snapped photographs.

Had I seen the perpetrator walking around my yard, I would have immediately called 911 to report a suspicious person.

It wasn’t that long ago that our garage was broken into.

Why are our city employees acting like thieves and perpetrators? It’s a very good question, isn’t it?

I did a little research after I recovered from my fright and anger. I went directly to the Minneapolis City Code of Ordinances, in fact, to learn about what the code says about inspections. And you know what it says? It clearly says that city employees must obtain permission to go on someone’s property. (See 244.130.)

Then I checked with the League of Minnesota Cities, an organization where cities regularly go to for advice. Know what I found there? This paragraph summarizes things nicely:

Whatever the work reason for entering private property, it is imperative to gain consent from the property owner or person with authority to give consent. In the alternative, barring one of the few exceptions, the city should seek an administrative search warrant to enter the property to inspect or perform work on the property.

Hmmm. That’s pretty strong language. It doesn’t leave much wiggle room. I know that consent was not given for inspector Philip N. Schwartz (I found his name listed as the inspector for my neighborhood on the city web site, and his name does appear above the creepy photos of my property) from either my husband or I. Perhaps he obtained an administrative search warrant?

According to the League of Minnesota Cities, an administrative search warrant allows the city to enter private property for purposes of inspection or abatement of a nuisance. For a valid warrant, the city must:
-Submit an affidavit in support of the search warrant showing probable cause for the search. Probable cause involves not just showing a particular property has a code violation, but also that the standards the city has for conducting the search are reasonable.
– Describe in the warrant the inspection program and establish that the inspection the city wishes to conduct falls within the plan.
– After an administrative search warrant is issued, the city should provide notice to the property owner or occupant. The notice should identify the nature and scope of the inspection or work, the date, and the time it is to be performed. If the city must return to the property to continue work or to follow up on an inspection or code violation, it is also important to notify the property owner or occupant of the date and time of the return.

No, I never received notice of the nature and scope of the inspection, the date or the time it was to be performed.

So, yes, this falls under trespassing, doesn’t it? The definition of trespassing is pretty simple. One trespasses when they enter land in the possession of another without permission. Yep. Philip N. Schwartz definitely did that.

As an American, I am protected by both the 4th and 14th amendments against unreasonable searches. As the League of Minnesota explained in their handout: Individuals have a reasonable expectation of privacy, and the city should take care before entering private property to perform public works functions. If the city is found to have violated a person’s property rights, it may be subject to legal liability including but not limited to civil rights claims and trespass claims.

As confirmed in Katz v. United States (1967), Justice Potter Stewart wrote in the majority opinion that a “search” occurs for purposes of the Fourth Amendment when the government violates a person’s “reasonable expectation of privacy.”

Yes, as a property owner I expect privacy on my own property.

If someone complains about my tree, a city worker can quite lawfully check it out from the alley, the street or the sidewalk. They could ask a neighbor to walk in their yard. Or, they could talk to me and ask for permission to come into my yard.

But they can’t legally walk on my yard (or really even my porch or sidewalk) without asking for permission.

It’s a violation of the U.S. Constitution.

They’d do well to remember that.

And what I really want to say to Minneapolis Inspector Philip N. Schwartz, his supervisor Paul Meyers, my council member Andrew Johnson, and the rest of those at city hall is this:

Just because you’re in a position of authority certainly does not mean its ok for you to tread over people’s rights. In fact (and here’s the kicker ), as a person in power you should be protecting those rights.

WHAT’S MORE —
Using 311 to shield yourself from the public who wants to hold you accountable for your actions is pretty shameful. The only numbers I can find for the housing inspection service lead me straight to 311. If I wanted to speak to some random person at 311, I’d call there. But I want to speak directly to the person who thought it was ok to trespass on my yard, and I want to lodge a complaint directly with their supervisor. As a taxpayer, I think I have that right. I’m paying your salary. You’re not paying mine, or really even helping me out. Instead, you’re trespassing and violating the rights I have a U.S. Citizen. Your name, email and phone should be listed publicly. If you don’t like the public and don’t want your actions to be public, you better not be working for the government, a public entity.