You have until Monday, Sept. 2, to vote on one of three $1 million projects that could make St. Paul better.

If you haven’t heard about the Forever St. Paul Challenge, listen up: The St. Paul Foundation launched a contest back in February that will award $1 million to a winning idea to “make St. Paul better.” Earlier this summer, a panel of judges narrowed a pool of nearly 1,000 submissions to 30 semifinalists.

One of the finalists is the St. Paul Art Train, a project that would develop new creative space in refurbished rail cars on University Avenue.

The vision of Como resident Craig Blakely, the project would transform three passenger rail cars into rentable art business workspaces and refurbish a dining car into a restaurant or coffee shop. The Art Train would be attached to the railroad loading dock at the Wright Building at the corner of Hampden and University. 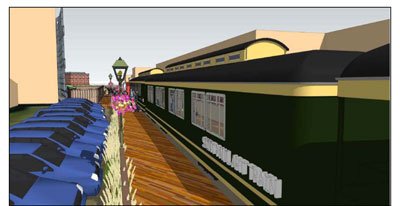 Right: The Art Train boardwalk looking west.The winner will be the idea that gets the most online votes from the public.

The other two finalists are the St. Paul Center for Creative Arts by Jack Ray of Minneapolis and the Urban Oasis by Tracy Sides.

Ray wants to create a learning space for youth modeled after the Penland School of Crafts in North Carolina. Ray is the former executive director of Urban Boatbuilders in the Midway of St. Paul, a group that partners with Twin Cities youth organizations to teach 13- to 16-year-old students—many of whom are struggling in traditional school settings—how to build boats.

The St. Paul Center for Creative Arts would be a collective of arts organizations or one organization with multiple divisions that would work with students as Urban Boatbuilders does. Ray envisions the boat group as its anchor tenant.

The third finalist is the Urban Oasis by Sides of St. Paul. Sides wants to create a food hub in a vacant four-story building at the Bruce Vento Nature Sanctuary near downtown St. Paul. She sees the Oasis as a gathering spot, a job incubator and a place where community members can learn to preserve and cook their own food. The building would also be a nature-themed event center. 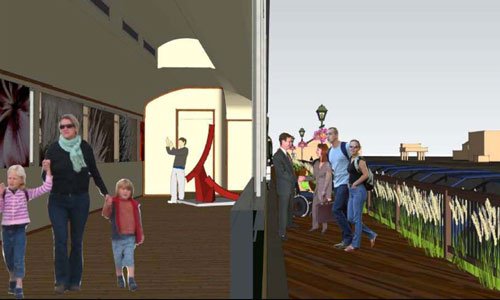 Right: A cross-section of the inside of a rail car and the boardwalk, looking east.

Blakely’s project would be in the Creative Enterprise Zone, the Raymond and University area of St. Anthony Park that’s been designated by the city as a hub for light industry and artists. The designation does not guarantee tax credits, special zoning or design standards for businesses in the area, but it opens the possibility that those types of incentives could happen down the line.

The Creative Enterprise Zone is bounded by Interstate 94 on the south, Prior Avenue on the east, the railroad tracks south of Energy Park Drive to the north and Minneapolis to the west.

Blakely says his long-term concern is to “foster economic development strategies that will provide entry-level living-wage jobs, a concern that was sharpened by the [Brookings Institute’s] ‘Mind the Gap’ report in 2005,” which said the Twin Cities needed to preserve light industrial jobs in the inner city that were accessible to people with a high school education or less.

Blakely, who served on the West Midway Industrial Strategy task force, said the Art Train would do just that while also encouraging the growth of creative enterprise jobs.

The Art Train would develop new creative space in recycled passenger rail cars permanently affixed to abandoned railroad spurs in the public right-of-way. Costs would be kept low, he said, because no land would be acquired and surplus passenger cars could be purchased and moved by rail to the site relatively cheaply. The main expense would be upgrading the electrical, heating, ventilating, air conditioning and plumbing systems, making the rail cars handicap-accessible, and improving parking and the pedestrian environment. 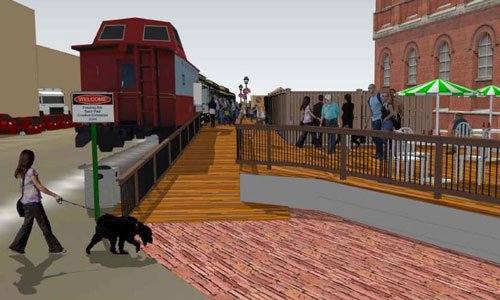 The initial phase would provide nearly 3,000 square feet of incubator space for a variety of creative and artistic enterprises. Future phases could develop on other abandoned sidings, he said.

Would $1 million cover the project? “I think it is just about the right amount of funding because it would avoid one of the biggest costs—acquiring a site,” Blakely said. The train would be built on the public right-of-way that Minnesota Commercial Railway would give back to the city, he said. Rent would pay for maintenance.

You can vote on the project of your choice at MNIdeaOpen.org/foreversaintpaul. Hurry: You have just a few days left to do it.