Added to the affordable housing market is this 50-unit apartment building for families in Roseville. (MinnPost photos by Cynthia Boyd)

In a market where rental housing is tight and affordable housing even more scarce, there’s good news for some families scrambling to make ends meet.

It comes in the form of a project called Sienna Green Phase II in Roseville: 50 affordable, two and three-bedroom apartments for families in a building so new that workers in neon vests were hard at it around the grounds at lunch time Monday, finishing off porches on the structure’s front façade, painting, watering new day lilies.

Affordable housing is “a never-ending need,’’ says Gina Ciganik, demonstrated in part by the fact there are only six or seven family apartments still unspoken for at Sienna Green and a tall stack of applications from families hoping to move in.

Some 125,000 Minnesotans are “one paycheck away” from losing their housing, says Ciganik, who is vice president of housing development for Aeon, the nonprofit that spearheaded this building project. Unemployment, underemployment and home mortgage foreclosures are among the reasons, she says.

Aeon is one of many organizations around the state dedicated to expanding the affordable housing market following one of the worst economic recessions in our history.

A report issued late last year by the Metropolitan Council showed local communities lagging far behind their goals to create both affordable owner-occupied and rental housing.

“The mortgage foreclosure crisis has devastated families and neighborhoods, and the number of homeless, especially families and children, continues to grow despite determined efforts to prevent and end homelessness,” according to the Family Housing Fund in its 2011-13 strategic plan.

In the Twin Cities where the average rent for a two-bedroom apartment is about $950, people working minimum wage have to work three jobs to afford housing and to pay for other necessary costs of living, she says. She says that includes people working at retail businesses at entry-level wages, people able to find only part-time jobs and even entry-level teachers. Financial experts say no more than 30 percent of income should go toward housing costs and utilities.

In contrast, Sienna Green’s two bedroom apartments rent for $831 a month and their three-bedrooms for $961. Ciganik says that makes them affordable to households earning 60 percent or less of the area median income.

A grand opening event this week celebrated the cooperation of public and private sectors that made it possible. Figure in a city mayor, a couple of legislators, a commissioner from the Minnesota Housing Finance Agency, a U.S. Bank spokesman and Joshua Miller.

Miller, his wife Katherine and their three sons (ages 5 and under) are among the lucky ones. They become Sienna Green residents Aug. 1.

“This really fits our needs and our ability to pay,’’ Joshua Miller tells me, as well as the family’s desire to live in a diverse community.

With a PhD so new the ink is barely dry, Miller is still looking for a full-time academic appointment. Meanwhile, he’s doing factory work part-time and teaching occasional theology courses at Augsburg College.

Sienna Green II is the second phase of a $12 million project organized by Aeon, an organization that raises and collates public and private money to buy and build properties to house people with low incomes.

In 2006 Aeon purchased five down-at-the-heels brick buildings then named Har Mar Apartments for $5 million and “recycled” them, gutting the interiors of 120 one-bedroom apartments some then thought better suited for the landfill, explains Ciganik. That complex became known as Sienna Green, Phase I.

I drove over to get a firsthand look and stopped to talk with Phase I resident Beverly Nash, out dumping her trash.

“The apartments are a little small but everything’s brand new,’’ the 52-year old confided about her one-bedroom place. And though parking can be tight and she complained of a moldy smell in the basement, she says this is better than the last two places she lived, including a public housing building in downtown Minneapolis.

(In response to the “smell” comment, a spokeswoman for Sienna Green says there had been some drainage problems around the building following heavy rains this summer, but that has been repaired and a dehumidifier has been installed in the building basement.) 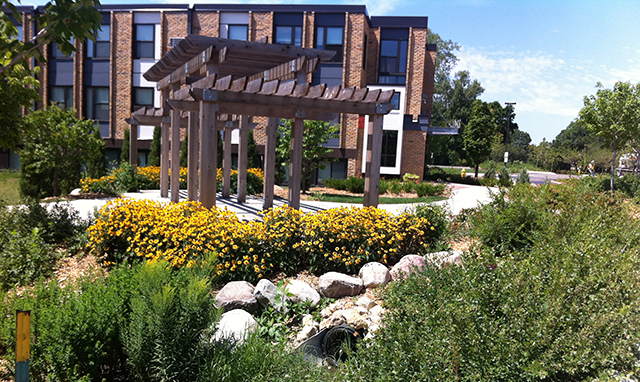 A garden at Sienna Green fronts a building of 1-bedroom units.

Ciganik says Roseville seemed a good fit for a bank of affordable apartments, given its geographic location as a first tier suburb, amenities like a “great school system,’’ and public transportation as well as its abundance of service-sector jobs.

“Folks need to be able to potentially walk to work or bus to work,’’ she says, adding she’s a Roseville resident too.

The housing community lies on a frontage road at Snelling Avenue North and Minnesota Highway 36, within view of the high-end Rosedale Center mall in a St. Paul suburb that U.S. Census data show an 8.5 percent poverty rate.

Add in the fact that the suburban city boasts some immigrant populations with big families and a scarcity of multi-bedroom apartment units, and the city is ripe for affordable housing.

Over the past 26 years, Aeon has developed or built and now owns and operates more than 2,000 affordable apartments and town homes.