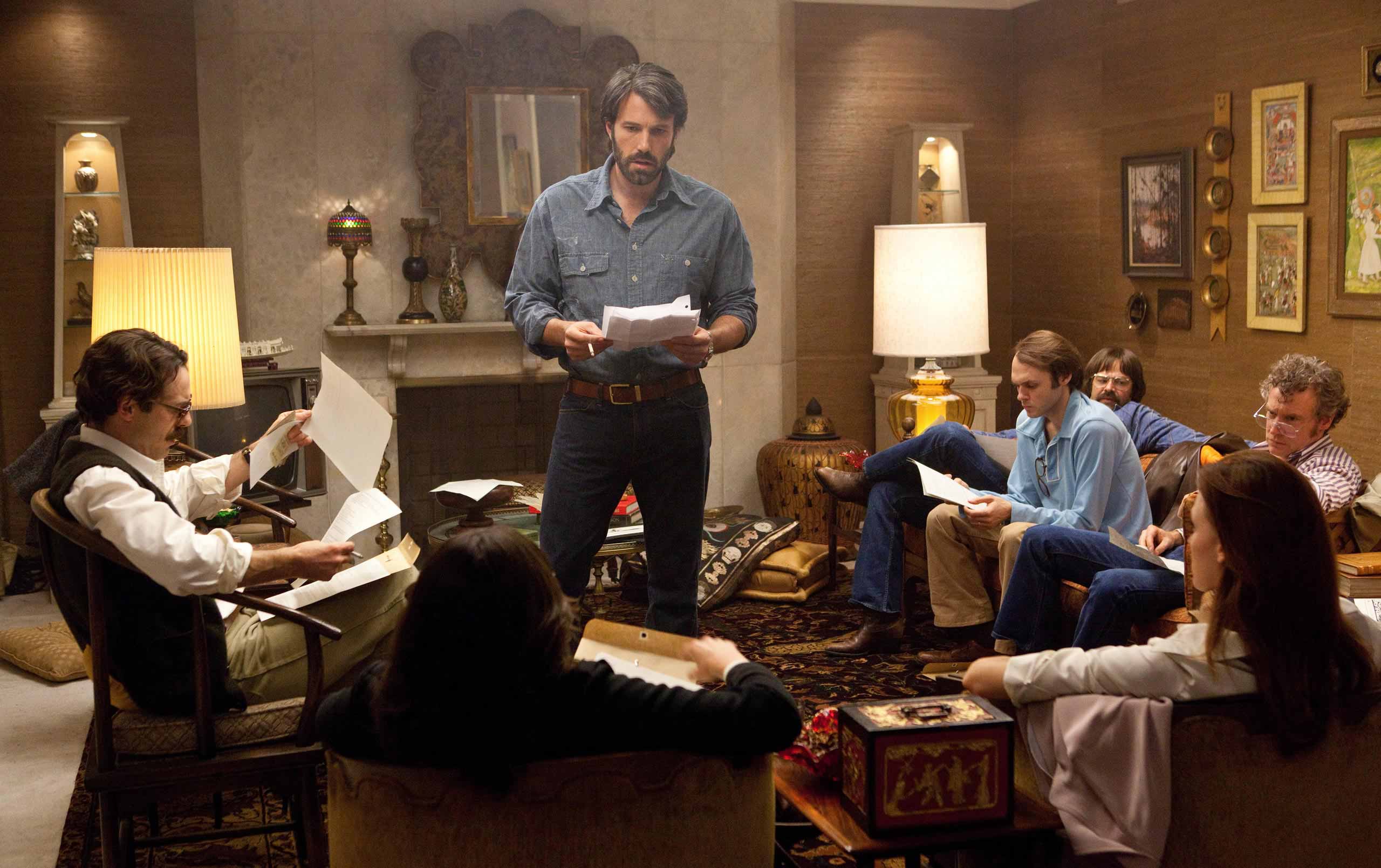 Based on a declassified true story about a daring and deceptive rescue attempt in the aftermath of the Iran hostage crisis of 1979, Argo is a film that is sure to make you break out in an apprehensive sweat thanks to its expert direction and spot-on performances. Ben Affleck not only takes the lead acting reigns, but also directs. He takes this period piece as far as it can go, which turns out to be a pretty impressive distance.

If the first ten minutes doesn’t suck you into the story, then you’re probably facing the wrong way in your seat. Crowds of sign waving, arm pumping, flag burning Iranian protestors press against the brick walls of the American embassy in Tehran, Iran. They’re furious because the United States took in the former Shah, who was overthrown by the Iranians. After breaking through the iron gates and storming the office buildings, the Iranians take over 50 Americans hostage, including the military men in charge of protecting the base (their head officer tells them prior to the overtaking: “Don’t shoot anybody. You don’t want to be the guy who starts a war.”) But not every American was taken. Six people—four men and two women—escaped through a back exit and were taken into hiding at the Canadian Ambassador’s house down the road.

Sixty-nine days pass without the six escapees being caught. And that’s when Tony Mendez (Ben Affleck) steps in. He works for the CIA and his specialty is smuggling people out of sticky situations. Mendez comes up with the idea of going to Iran himself, posing as a producer for a fake science-fiction movie called “Argo” that needs to be set in an exotic, desert-like locale. The plan is for Mendez to bring the six fugitives fake identification that portrays them as part of the film crew. When Mendez leaves, he will take the six with him. An in-and-out extraction that will take place over two days. What Mendez and his co-workers in Langley discover is that though the plan looks good on paper, actually executing it is an onerous and life-threatening task.

The greatest strength of Argo lies in its ability to churn out heart-hammering suspense. Several scenes stand on their own as effective little apprehensive cookers. Things start out slow, then something unnerving is observed, then things gradually get worse, and finally the characters and the audience alike find themselves in a vice-grip of sweaty-palmed panic. There’s an effective moment when Mendez is driving the group through the streets of Tehran in a van and they see a protest mob clogging the intersection ahead of them. When Mendez tries to back up, he’s stopped by a marching mob that just turned onto their street behind them. Mendez is then forced to drive through the hostile mob ahead of him, a mob made up of people who would gladly hang the Americans if they knew whom they were. This scene only lasts a few minutes, but it left me feeling shaken and claustrophobic.

Something that helps ratchet up the suspense is the slick film editing by William Goldenberg. Like Zodiac, another movie based on real historical events, this film incorporates a lengthy list of characters doing a lot of different things in many separate locations. Thus, it requires a lot of cuts to different scenes. The end result of switching scenes so frequently can easily lead to an unwelcomed rushed feeling in the viewer, but Goldenberg knows all the right times to exit one situation and enter another. In one haunting sequence, Goldenberg juggles three different scenes—the most prominent involving a firing squad and hooded prisoners—at a frenetic pace, jamming together segments with totally different tones to crank up anxiety and unease.

Despite all of the high-rate excitement, I honestly feel that Argo would be borderline forgettable if not for the top-of-the-line acting. Affleck is great as a man dealing with issues both in and out of the office—the escape plan in Iran and a crumbling marriage at home. Affleck almost always wears a grim frown and has a desperate look in his eyes that shows while he is the best in the business at what he does, he’s still a nervous wreck on the inside, knowing that he’s going up against staggering odds that he’ll fail.

Still riding the well-earned opportunity wave that rose from the success of Breaking Bad, Bryan Cranston plays the role of Mendez’s superior with a hard-nosed grittiness mixed with a subtle winking humor that makes the part all his own. It’s especially fun to see Cranston run around the office, get in people’s faces, and growl at them like a demented bull dog in the film’s climax. John Goodman and Alan Arkin are also fantastic as two Hollywood contacts that help the mission move along by providing all the necessary elements a fake movie needs in order to look real. Goodman and Arkin inject a lot of humor into the story by audibly roasting Hollywood’s underlying phoniness time and again. The jokes never get old.

Add together the breathless suspense and fine acting, and you should get a solid, flawless movie. But that’s not the case with Argo. Regrettably, the screenplay, written by Chris Terrio and based on an article by Joshuah Bearman, does not flesh out any of the characters—particularly the six escapees—enough to make you care about them. Watching the fugitives make their way through the airport in the climax, I realized I knew almost nothing about them. The dialogue between characters in earlier scenes fails to establish solid relationships and rich characterizations. The result is flat, nearly dehumanized people that are a hard sell to invest in. Because of this, the climactic airport scene isn’t as meaningful as it could have been. Did my heart rate accelerate as Mendez and the others attempted to board a plane and get the hell out of Dodge? Sure. But I can tell you I cared much more about the outcome of an airport getaway in a different movie, 2003’s Stander, because by the time the conclusion arrived, the characters in that film were multidimensional beings I could easily root for.

Argo is a bona fide real-life adapted thriller that effectively induces sweat soaked reactions in viewers. But it also relies too much on its fascinating source material and not enough on relatable, interesting characters.