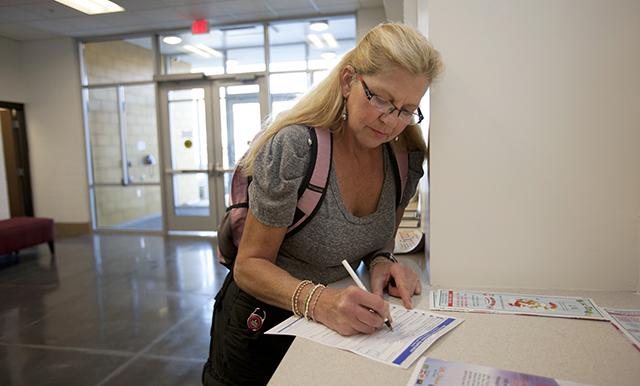 Deborah Handley is among hundreds of homeless and formerly homeless people across the state filling out Minnesota Voter Registration Applications so they can vote in the November election. (MinnPost photo by Mike Dvorak)

Like many Americans, Deborah Handley has had a lot on her mind lately to distract her from the upcoming elections: her joblessness, newly diagnosed diabetes, a past battle with cancer and, oh, yes, her homelessness.

That’s changing. Settled a few weeks ago into an efficiency apartment at Higher Ground on the outskirts of downtown Minneapolis, the 58-year-old former waitress and bartender is working to get her life together – and that includes preparing to vote in next month’s elections.

She is among hundreds of homeless and formerly homeless people across the state filling out Minnesota Voter Registration Applications so they can vote in the November election.

Her issue? She’s worried about losing Social Security. “I don’t have a pension,’’ she says.

Advocates for the homeless hope to bring 1,000 more voters to the election rolls this fall — not an insignificant number in a state with the recent history of a very close U.S. Senate election – as part of a statewide effort that includes smaller private shelters as well as the big players such as People Serving People, Catholic Charities of St. Paul and Minneapolis and the Minnesota Coalition for the Homeless.

Organizations working with the transient poor have been helping to register homeless people living in temporary housing and recently homeless voters for more than a decade. But this election is high stakes, they say.

“[Voting] is their constitutional right,’’ argues Colleen O’Connor Toberman about persons living in emergency shelters and transitional housing, with a friend or even under a bridge.

She reflects back on a time in this country when voting was exclusionary and limited to white, male landowners. “If you don’t vote, politicians don’t listen to you,’’ says Toberman, who heads up a voter-engagement drive at Our Savior’s Community Services, which provides emergency, transitional and permanent housing in Minneapolis.

Often, she says, the homeless feel marginalized by society. Voting is one way they can have a voice, she says.

Amendment supporters maintain the Legislature will do what it takes to provide proper, free identification to the homeless, the elderly and students to allow them to vote in the precinct where they live. Supporters argue the identification provision reduces voter fraud.

State Sen. Scott Newman, R-Hutchinson and chief author of the measure in the Senate, says that under the proposal, if a homeless person doesn’t have proper identification, such as a driver’s license, the state would be the required to provide an ID. “To me, [the voter ID amendment] is more protection for these people,’’ Newman argues.

But advocates for the homeless say the proposed amendment could disenfranchise many of the transient poor.

They argue it’s all too easy to lose traditional forms of establishing one’s identity — a birth certificate or Social Security card — through multiple moves or to misplace a driver’s license when it does you no good because you can no longer afford a car. Loss of such documents make getting a valid, government-issued photo ID described in the proposed amendment harder, advocates say.

They point out that the homeless include persons displaced from their homes by mortgage foreclosure and squeezed out of affordable housing by a housing market with vacancy rates at about 2 percent.

But amendment supporter Joey Gerdin, a volunteer with Voter ID for MN PAC, says, “The reality is you can’t get any government service without proving who you are.’’

Last March she tested the system, Gerdin says, and “dressed up as a homeless person’’ and lined up at Dorothy Day Center in St. Paul, a program of Catholic Charities, for a free meal. She says she was turned away because she had neither identification nor a birth certificate. (Catholic Charities requires that persons needing such services go through an intake process and then issues them “Community Cards.’’)

Many advocate organizations, including Catholic Charities, oppose the proposed proposed amendment. Catholic Charities says: “Many of the 34,000 people we work with annually do not have a valid, government issued ID or the means necessary to obtain documents to get a valid ID.’’

“Traditionally our clients, people who have experienced homelessness, are low turnout. Yet they are the people most vulnerable to changes in government. [They need to] make sure their voices are being heard,’’ explains Ana Ashby, public policy organizer at Catholic Charities in the Twin Cities.

“It’s good to continually remind ourselves we need a representative democracy where everyone turns out to vote,’’ says Ashby. The organization has helped register about 200 people so far, with a goal of 500.

People who have “not experienced the challenges of being homeless or living in poverty or having a disability or simply being very old really don’t understand how difficult or nearly impossible it can be to obtain a government I.D.,’’ says Daniel Gumnit, executive director of People Serving People, a Minneapolis housing organization.

Voting and participation in civic life is an important component of “moving people from desperate situations to stability and integration with society,’’ Gumnit says, stressing their get-out-the-vote effort is non-partisan.

Current Minnesota law is less restrictive than the proposed amendment and specifically addresses homeless persons and defines their residence as where they sleep. That includes an emergency shelter, a friends’ home, or even the space under a bridge, according to the provision.

Under current law, persons not registered by Oct. 16 or who live at a location with no mailbox may bring to the polls with them someone to vouch for where they live.

One afternoon last week Ashby from Catholic Charities handed out Snickers candy bars and voter registration information at a table set up in the lobby of Higher Ground, which is operated by Catholic Charities. About a dozen people pass or stop during the hour I’m there.

She asks them if they’ve registered to vote, if they know that since they’ve recently moved into the new facility they have to register their new address.

She talks about two proposed constitutional amendment votes on the ballot, adding: “We’re urging people to vote ‘no’ on the photo ID amendment.’’

Some rebuff Ashby’s efforts. Would you like to register? she asks a young man in his late 20s.

Hesitating, he answers, “No.’’

“Nothing goes my way,’’ he replies.

Other residents, like Donald Hurt, 59, grab the opportunity. Though he’s lived in Minnesota for 22 years, he’s never before voted, he says.

Why now? “I’m concerned about the status of unions,’’ the economy and keeping America “safe and secure,’’ says Hurt, a former union worker on medical disability.

Another man, Howard, signs up but refuses to give his last name because he’s recently out of jail. He’s eligible to vote now, he says. “I did my time. Everybody should vote. I like to see a good person in office, somebody for the people, not for himself.’’

A smiling Handley, the former server and bartender on disability, says having a place to call her own at Higher Ground and getting back to voting are steps back to normalcy. “I’m a Democrat. I always vote Democrat,’’ she says.