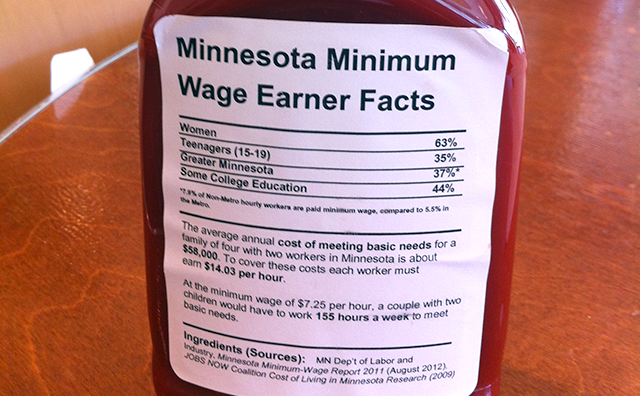 The back labels of A Minnesota Without Poverty's ketchup bottles offered "Minnesota Minimum Wage Earner Facts" like: "63 percent of workers relying on minimum wage are women."

Advocates for the poor couldn’t help but notice the ketchup bottles sitting on luncheon tables at their gathering Thursday, an odd condiment for the pasta salad on the menu.

Then they looked closer and camera phones started clicking.

Leftover from the 2013 legislative session, front bottle labels carried a message aimed at Minnesota legislators: “Ketchup to the cost of living. Raise the minimum wage” — with the brand name “AMWP” for the organization A Minnesota Without Poverty. Back labels offered “Minnesota Minimum Wage Earner Facts” like: “63 percent of workers relying on minimum wage are women.’’

Even as they celebrated legislation passed last session to help the less fortunate, advocates for the poor this week made it clear they’re going to continue to push for an increase in Minnesota’s minimum wage.

French fry humor aside, a good-paying job is a big step toward moving out of poverty, they say. And the state’s rate of $6.15 an hour, though most often trumped by the fed’s required minimum of $7.25 an hour for qualifying workers, just doesn’t cut it.

Representatives from about 50 organizations who work with low income persons were meeting in St. Paul to evaluate legislative outcomes and discuss “unfinished business” when it comes to ending poverty as well as to reinvigorate the recommendations of the Legislative Commission to End Poverty by 2020 report issued in 2009.

An end to poverty comes down to basics: having adequate food and shelter, meaningful work, safe communities, affordable health care and a good education, said Nancy Maeker, executive director of A Minnesota Without Poverty, a group that’s been convening gatherings of anti-poverty organizations around the state to enable them to set priorities and work together to end poverty.

Advocates praised the 2013 Legislature for passing legislation that provides more affordable housing, helps educate low-income preschoolers, helps parents to feed and care for their children and that allows some low income persons to build and maintain financial assets.

In interactive sessions at the Connecting to End Poverty event, participants listed future issues that have the “most promise for moving toward the goal of ending poverty.”

Besides raising the minimum wage, top vote-getters include increasing welfare grants and more broadly raising asset limits so low income persons can save for their futures and still qualify for aid programs.

As for that minimum wage, there was discussion of how an increase almost made its way into the law.

Almost to the closing bell, advocates for raising the wage were sure representatives and senators would hash out in conference committee what they had failed to agree on in their respective houses: just how much to raise the wage.

The House passed a bill raising the wage to $9.50 an hour, the Senate to $7.75 — both with automatic cost-of-living increases. It was up to a joint conference committee to find a solution, but compromise efforts crashed and burned.

Even the governor’s support didn’t cinch it.

“Something is better than nothing,’’ Gov. Mark Dayton said at a news conference. “I want work to pay. Somebody working full time, trying to support a family, should be able to make the poverty level.’’

Recent numbers show 137,000 Minnesota children living in poverty have working parents who would have been helped by a minimum wage increase, said Alexandra Fitzsimmons, legislative affairs and advocacy director for Children’s Defense Fund-Minnesota.

“From the beginning the minimum wage bill needed to be seen as an issue that impacts people and moves people out of poverty,’’ said Fitzsimmons, also a board member of A Minnesota Without Poverty.

She hopes the poverty focus, along with strong support from members of A Minnesota Without Poverty, will lead to a wage increase.

Katherine Wagoner with the Minnesota Coalition for the Homeless sees strength in numbers.

Food, wages, housing, fixing the safety net, assets building: “Every one of those things is important” when it comes to helping people out of poverty, Wagoner said. Yet it will take anti-poverty organizations working together to end poverty, she said.