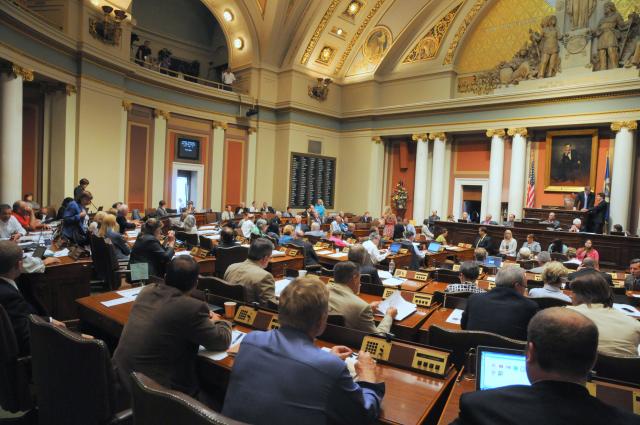 When legislators return to their chambers next year, advocates for the poor plan to be ready. (MinnPost photo by James Nord)

With the convening of a new Legislature just around the corner and signs of an economy in recovery, advocates for the poor aren’t wasting any time in revisiting the 2009 recommendations of a bi-partisan commission that laid out a blueprint to end poverty in the state by 2020.

Connecting to End Poverty, a conference planned for Wednesday, Dec. 5, will bring together representatives from more than 35 non-profit groups for a day of taking stock. They’ll look at how far they’ve come and how far they have to go to end poverty, and how to help move the Legislature forward toward that goal.

They’ll look for common roads and, hopefully, according to Nancy Maeker, who heads up A Minnesota Without Poverty, which is convening the meeting, they’ll agree on one to three priority issues they can all rally behind to work together on in the 2013 session. Think: united front, strength in numbers.

The idea is to remind people of and get them behind the commission’s recommendations, says Alexandra Fitzsimmons, who sits on the board of A Minnesota Without Poverty and is legislative affairs and advocacy director of the Children’s Defense Fund-Minnesota.

The day also gives participants the opportunity to talk about their efforts for legislation covering a wide gamut of anti-poverty issues, from raising the minimum wage and increasing child-care assistance, to implementing low-income tax credits and streamlining government assistance programs, as well as educating the poor in financial literacy.

Action in the areas of affordable housing and health care, early childhood and parenting education will be discussed as well.

From the report’s introduction:

“We need an economy that restores work as a means out of poverty, that invests in developing occupational skills, and that values the potential of everyone. We must use all sectors of the economy — business, the faith community, government, and nonprofits — to address the flaws in the current economy and use the creativity and productivity of Minnesotans to ensure that all people can sustain their place in the community despite illness, age, disability or crisis.”

The report sets six goals: restore work as a means out of poverty, refocus public assistance to streamline services, help Minnesotans build and maintain financial assets, revitalize communities through infrastructure and person-to-person support, modernize the system of education to build the best work force, and develop an ongoing structure to monitor efforts to end poverty.

“If we could implement those recommendations that were identified as top issues, that would move our state a long way toward ending poverty,” Maeker believes.

It’s how to reach those goals that’s a matter for additional discussion.