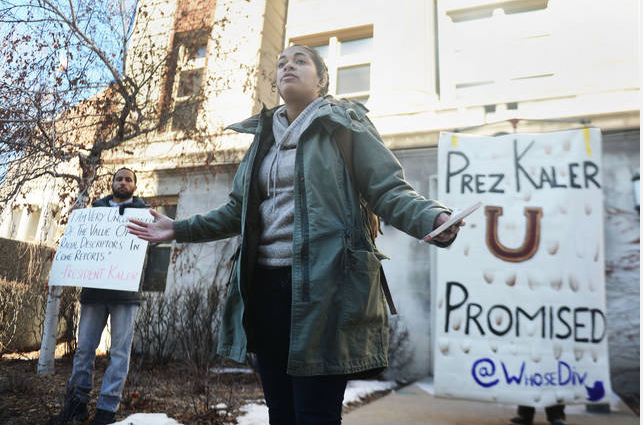 Authorities arrested 13 University of Minnesota students and community members on Monday night after a sit-in at Morrill Hall that lasted nearly seven hours.

Campus group Whose Diversity? planned the demonstration because it says school administrators haven’t sufficiently responded to the group’s list of diversity-related demands made last spring, according to an organizer.

Protesters gathered on the south lawn outside Morrill Hall at about 11:30 a.m. in solidarity with the 16 demonstrators who were already inside President Eric Kaler’s office.

The demonstrators told the crowd of onlookers during the sit-in that they brought enough food to last the night and had sleeping bags inside. The activists’ plan was to stay until they were arrested.

The protesters inside Morrill Hall communicated with those outside through the windows over the course of the demonstration.

The protesters were told they would be trespassing if they didn’t leave by 6 p.m. when Morrill Hall closed.

When closing time arrived, they were allowed to leave freely or choose to stay and receive citations or be arrested. Three demonstrators left the building, and the others were arrested, according to a University statement.

Some of the protesters’ names were listed on the Hennepin County Jail roster as of Monday night.

Tori Hong, a recent graduate, said Kaler responded to the list of demands from Whose Diversity? and met with the group in December to discuss the demands but has failed to take any action since.

Some of the eight demands the group made to administrators included removing suspects’ race from crime alerts, providing more funding for the Chicano and Latino studies department and ensuring each University building has one gender-neutral bathroom.

Kaler, along with Senior Vice President and Academic Affairs Provost Karen Hanson and Vice President for Equity and Diversity Katrice Albert, discussed the students’ demands with them multiple times, the University statement said.

At the demonstrators’ request, the University issued a written response to each of the demands.

Last spring, Kaler tasked a group of senior leaders with gaining a better understanding the University’s “campus climate” and making recommendations to improve it.

“We remain committed to having an open dialogue with all students, faculty and staff,” the statement read.

“I think that we have to have an inclusive, diverse University in order to have a top-notch, world-class University,” Grimm said.

“[People] talk about having [diversity] as something that benefits the University rather than something that is about basic ethics and justice and serving everybody,” Andic said.